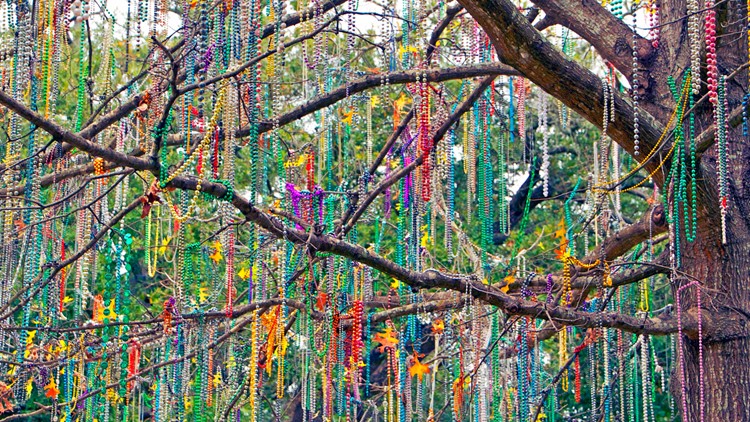 Photo by: Getty Images/iStockphoto
"This tree in the Garden District in New Orleans, Louisiana was taken February 9, 2012. The tree was loaded with Mardi Gras beads and was a precursor of the celebrations to come."

NEW ORLEANS — President Donald Trump announced that he was delaying some tariffs on Chinese goods to lessen the impact on the Christmas shopping season, but another holiday will reportedly also be spared: Mardi Gras.

The United States announced Tuesday that it would postpone certain tariffs on Chinese-made cellphones, laptop computers and other items and removing other Chinese imports from its target list altogether. They had been scheduled to kick in on Sept. 1. That has now been delayed until Dec. 15.

The Times-Picayune | New Orleans Advocate reports that those tariffs would have caused a jump in costs for beads and throws for the 2020 Carnival Season. But, now that they have been postponed, buyers should not see a change.

Dan Kelley, president of Beads by the Dozen - one of the areas largest Carnival throw importers - told the newspaper that 90 shipping containers carrying 40,000-pound batches of beads were set to arrive after Sept. 1. If tariffs had been imposed on those shipments, consumers would have been charged up to 8% more.

“We’ve been telling everybody that in the event the tariff came into play, we would assess them the cost of the tariff,” Kelley said.

News that the U.S. would delay tariffs on a number of Chinese imports until mid-December set off a rally on the stock market.

Retailers posted some of the biggest gains. The delay in tariffs means retailers won't have to raise prices on toys, clothing and other items during the holiday shopping season.