“We figured we’d make the best of it and while we’re here, we’d have fun,” Megan Tyler said. 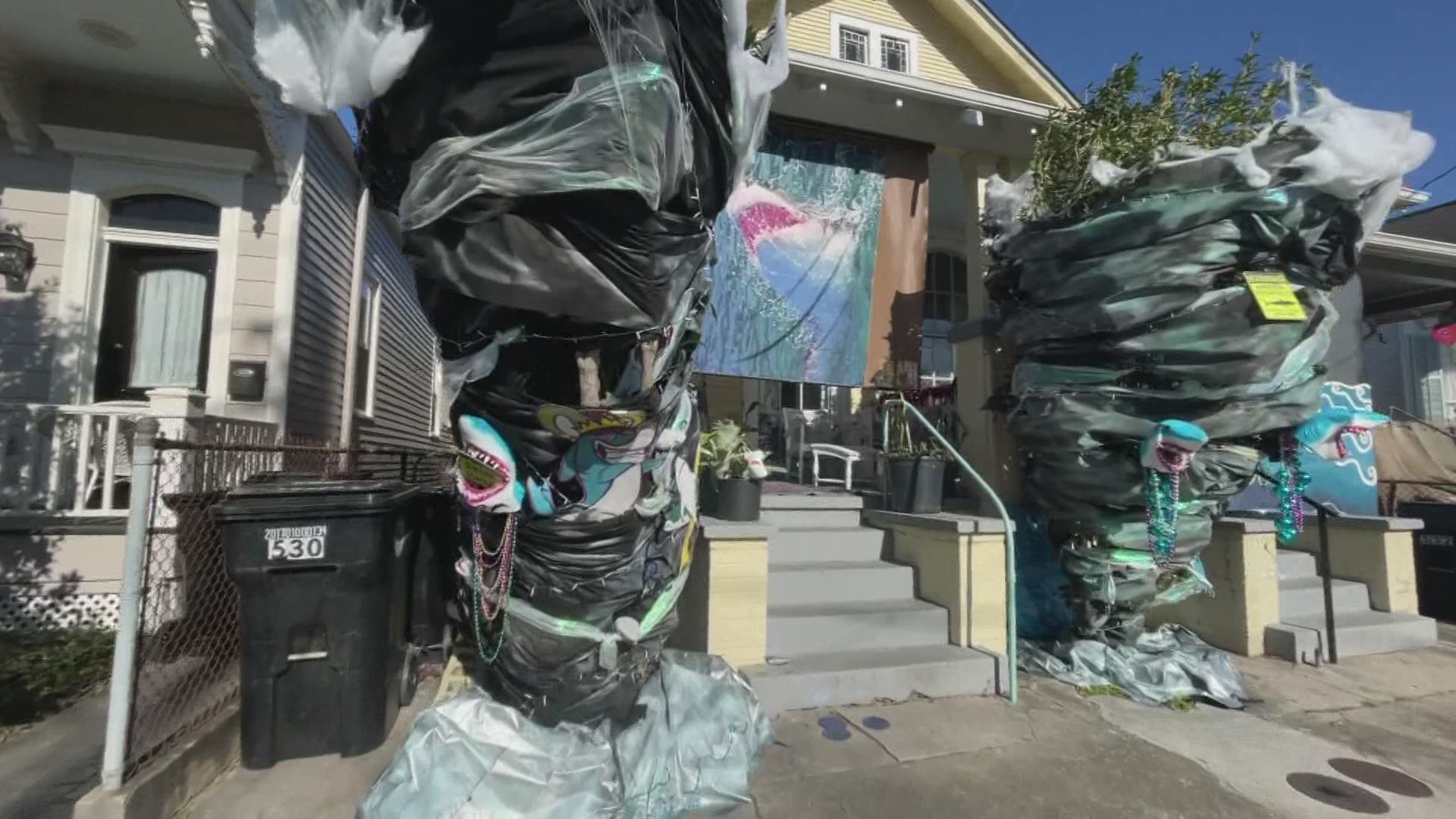 NEW ORLEANS — Watch out! One house float in Algiers Point comes with a warning, as it has a little extra bite.

“Our block is sharks,” said Megan and Calvin Tyler. “It was fun. I had never done it before.”

The Tylers currently live next to their good friends, the Bankens who came up with the Sharknado themed house float idea.

“I was like, well I think that would be cool, but I didn’t think it would look this cool,” Jared Bankens said of his wife’s clever idea.

“I thought house float? We’ll make it a float. We can stand behind, hang out beads, toss them out to people,” Calvin Tyler said. “I’ll turn our side of the house into an actual float.”

Many other neighbors on the street joined in with the shark theme. The Tylers dove in head first as they are experiencing their first Mardi Gras in New Orleans.

“We figured we’d make the best of it and while we’re here, we’d have fun,” Megan Tyler said.

It’s only a temporary home for the couple. It opened up just when they needed it most.

“We looked around, there was nothing available closer to home because everything was destroyed. We said sure, we’ll be here a month, two months,” Calvin Tyler said.

“It was serendipitous, it opened up ‘hey you want to be our neighbors?’ ‘Yea just a couple weeks’ and it ended up being six months,” Bankens said.

As their Sharknado themed house float would have it, the Tylers are dealing with major storms of their own/

“We went back and saw the devastation, didn’t really know which road was which. It was like a bomb went off,” the Tylers said. “Our home was unlivable so boarded it up, filed with insurance, and started the waiting game.”

Their downtown Lake Charles home is still unlivable after back to back hurricanes last year.

“It’s a historic home, over 100 years old. We renovated it ourselves so to see everything we had worked on going away, all the floors buckled, ceilings caved in, water damage on every wall, it was quite the mess,” Calvin Tyler said.

A blue tarp covers it now. The roof has to be replaced, as do the floors.

“Insurance has received anything and they are taking their time,” Calvin Tyler said.

Their current neighbors in Algiers understand their pain and loss.

“The entire community welcomed us too because they had been through this with Katrina and other storms so they all knew what we were going through,” Calvin Tyler said.

That's why for now, despite this very different Mardi Gras, they are diving right in, celebrating with the rest of New Orleans.

“We have beads, cups, wristbands with sharks, were really going to try to give back to the people who supported us,” Calvin Tyler said. “No matter what, let the good times roll. It’s Mardi Gras. It’s Louisiana, we’ll be alright"