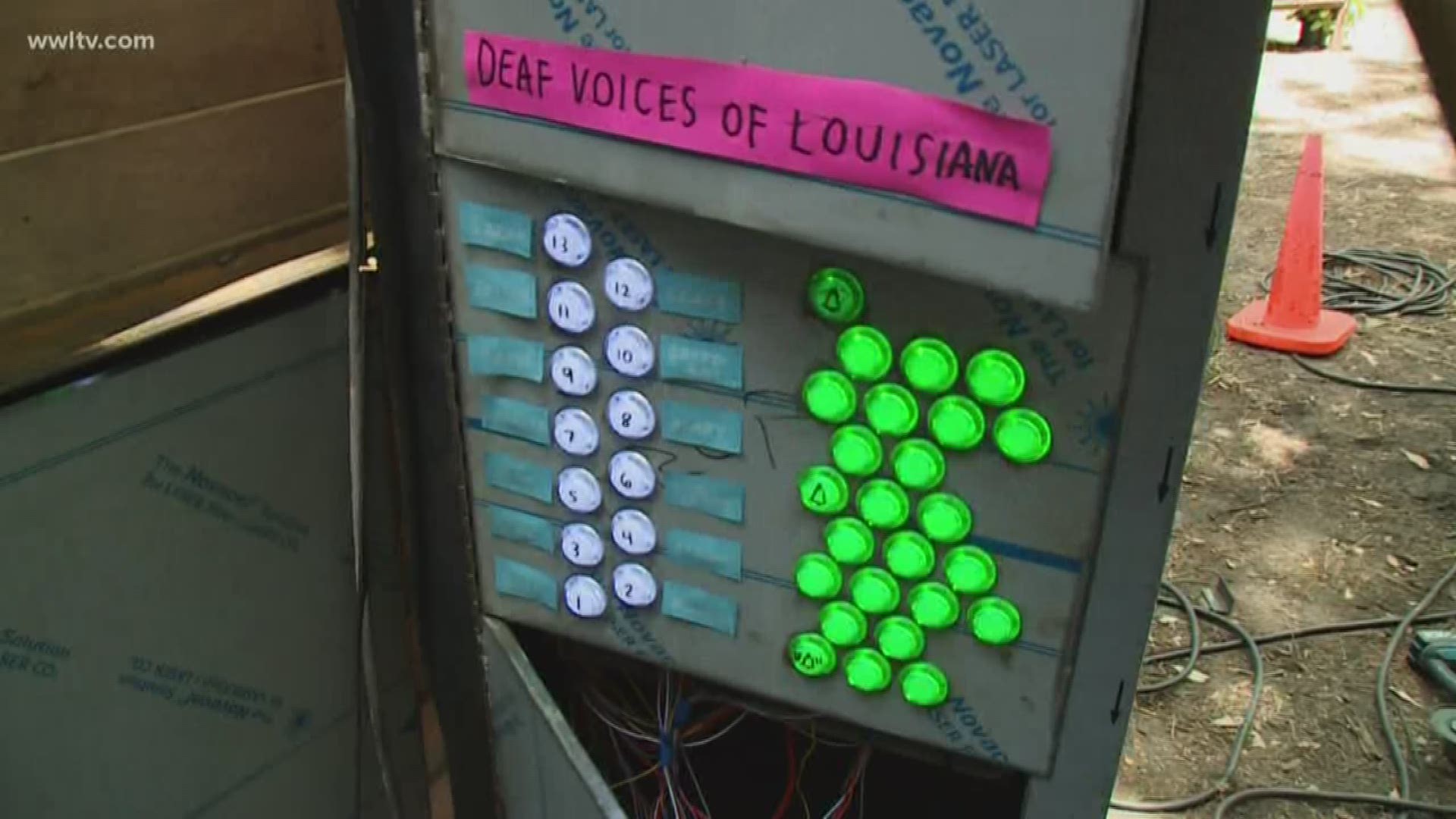 NEW ORLEANS — A new art installation at the Music Box Village of New Orleans is bringing people who can hear and Deaf members of the community together through music.

The Music Box Village is a hidden gem, one that lets you explore the beauty of sound.

“You have neighbors who play instruments, second lines that roll down the street, it’s threaded through life here, so this takes it a step further and says what if our houses were musical?” said Producer, Leah Hennessy.

There are a total of 14 installations showcased in different settings, or homes. Each creates sounds you hear, but the newest piece, "Elevator Pitch," lets you feel it.

"So this isn't like 'Oh, sound!' How do Deaf people experience sound?" said Christine Sun Kim. "It's not about that, it's really like you know what? (Deaf people) can own it too."

Kim is the artist of the piece. Her inspiration is her own story.

“When young Deaf kids go into elevators or stairwells or any type of contained space, they tend to scream because of the echo," she said. “I would love the feeling of the echo when I was younger. It was also better when someone else does it because I can feel the echo from their voice.”

Rick Snow collaborated with Kim on the project, saying it was an eye-opening experience. He says people of all ages are invited into the exhibit that is both deaf and hearing friendly. Once inside, the person will feel like they're standing in an elevator and with buttons, voices, vibrations and more, they'll be able to create a fun, unique and hands-on experience.

"We are creating a house, keeping in mind the experience of Deaf community members," he said. "We created an elevator that you can sing into with a microphone and it’ll vibrate the walls. We also have recordings of Deaf Louisianans that you can play back by pressing elevator style buttons.”

“I think that New Orleans is a place that is often thought about as a city of music and I would like for people to recognize that it doesn’t just mean people who hear music," Adriel Luis said.

Luis is a curator at the Smithsonian's Asian Pacific American Center. He helped bring the project to New Orleans and hopes it'll be a learning experience for people, teaching them how sound effects people more than just through hearing.

"Christine does what every great artist does, and helps us recognize things that are around us that we never put a name to or notice," he said. "I would describe the installation as a peak into a world that many people don't really see and it's not just about this childhood game a lot of Deaf people play. I think it's about generally recognizing that Deaf people have a voice. I think New Orleans is a place that is often thought about both inside and out as a city of music and I would like for people to recognize that it doesn't just mean that it's about people who hear music."

As work on the piece continued before its debut, the group's vision quickly became a reality, creating something everyone can enjoy.

"I really hope to give the impression that we in the Deaf community ... we created this sonic space ourselves," Kim said. "And for hearing individuals to join our space instead of just joining a hearing environment. So that we created this space as Deaf individuals and you join us."

For more information about this exhibit and The Music Box Village, go here.