'Us and the Cubans, our music and our people are the same'

When a group of New Orleans musicians made the trip to Cuba, there was no need for an interpreter. 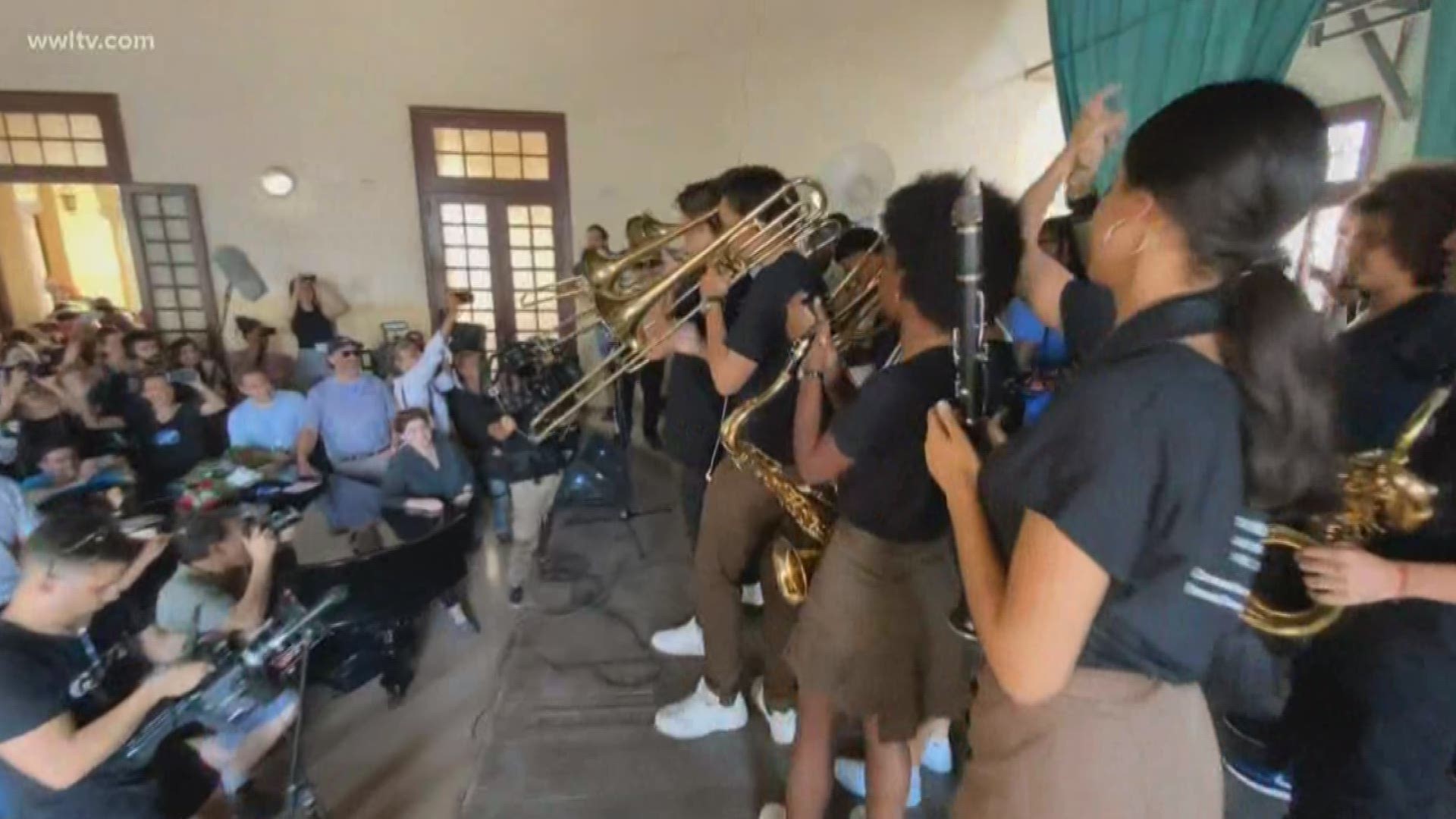 NEW ORLEANS — Last month, ten young people with the Trombone Shorty Foundation joined famous New Orleans musicians to perform at the Havana Jazz Festival in Cuba. The trip was designed to showcase New Orleans music and to be a learning experience and a cultural exchange with musicians from Cuba.

WWL-TV accompanied the high school students from New Orleans on the trip.

It included a visit to the Amadeo Roldán Music Conservatory, a prestigious Cuban school of music in Havana. Most of the New Orleans kids were on their first trip outside America and they understood how important this trip was.

“Us and the Cubans, our music and our people are the same, so I’m really hoping to get a lot out of this, to have fun,” said one of the young people from New Orleans, who called it the opportunity of a lifetime.

The New Orleans and Cuban students speak different languages, but when the Cuban students invited the Trombone Shorty Academy kids on stage, there was no need for interpreters.

This would be the beginning of a week filled with music, cultural exchanges and new friendships between New Orleans and Havana. It was a trip that all got started with a chance meeting between Tony Sylvester with the Gia Prima Foundation and Susan Sillins, who runs the Horns to Havana program.

“We met at a restaurant, and Susan told me what she had been doing for many, many years, bringing horns here. I got on the phone and called Bill Taylor with the Trombone Shorty Foundation and said ‘I just met a wonderful woman and what she’s doing sounds fun and let’s do something together,’” Sylvester said. “Take a look. It is magic.”

“This is the first of kids coming down to us. The Trombone Shorty Academy, we’re so proud of them, have come because of Tony and the Gia Prima Foundation,” said Sillins.

One of the highlights at the Cuba music school came when Troy “Trombone Shorty” Andrews gave some of the Cuban students new instruments.

After that, Shorty was back on stage holding a class for some of the students at the school. At that moment, the bond between New Orleans and Havana was sealed in the language they all shared: music.

This cultural exchange between New Orleans and Havana was more than just the students from two countries meeting and sharing music.  This trip also included some well-known New Orleans musicians: The Soul Rebels Brass Band, Tank and the Bangas, Big Chief Monk Boudreaux, Anders Osborne and Trombone Shorty. All were there to bring New Orleans music to the Havana Jazz Festival.

Having so many New Orleans musicians in Cuba brought press coverage from around the world. WWL-TV was the only New Orleans news team invited to come along on this journey, which was called “Getting Funky in Havana.”

“It’s completely worth it. Everybody here in this room is worth whatever we went through…once you get outside the airport and you smell the air and you see the people and you see the cars,” Tarriona "Tank" Ball said laughing, referring to the ever-present vintage automobiles seen on the streets of Havana.

That night at the Teatro Nacional, a packed house got to hear the Soul Rebels headline their first show ever in Havana, with the Trombone Shorty students and members of one of Cuba's hottest bands coming together for a true New Orleans-Havana experience.

The day after that, there was a huge second line through the narrow streets of La Habana Vieja, or Old Havana, which is kind of like the French Quarter.

“This is beautiful, I wouldn’t trade it for anything in the world, to experience this here in Cuba,” Trombone Shorty said as we walked the streets with him. “The meeting of the cultures, we have the Cuban musicians jamming out with us like we would do on any given Sunday in New Orleans under the bridge. We’ve got the kids here from the foundation playing the second line, along with the Soul Rebels brass band helping us out and it’s just a beautiful thing. It’s unbelievable.”

It was more than just special, it was historic. Havana had never seen anything quite like this before.

The second line wound through the streets, picking up more and more people along the way. It was followed by the meeting of the second line and the Cuban conga with New Orleans’ own Cherice Harrison-Nelson, Big Chief Monk Boudreaux and the conga dancers melding together in a symphony of sound and unity.

For that moment, all was right in the world.  Two cultures came together with music as a common bond. It was the sharing of cultures without politics, but in this day and age it’s hard to escape the political climate from both America and Cuba.

The next day there was a headline in the New York Times that read “Festive New Orleans Conga in Havana Defies Trump Cuba Policy.” It was a clear reference to President Donald Trump’s rolling back the easing of relations with Cuba which were opened by President Barack Obama.

RELATED: US bans charter flights to Cuban cities besides Havana

At a news conference on the day of the newspaper article, we asked Bill Taylor with the Trombone Shorty Foundation if that was the case. Did they bring the kids to Cuba for a cultural exchange to defy or despite U.S. policy?

“For us, coming to Cuba wasn’t political, it was cultural. Historically, despite the political differences between our two countries, one thing that has not changed is our mutual appreciation for each other’s music, its culture and its people,” Taylor said.

That night at a packed concert hall in Havana, there was no talk of politics. The Cubans in this audience were here to hear Tank and the Bangas headline their first-ever major show in Cuba and they did not disappoint.

The next night, though, at an intimate concert for a group of people who helped make this trip possible, there was a message about the political climate in both countries. Anders Osborne and Cuban legend Carlos Varela sang a song about building doors, not walls.

The week in Cuba for the New Orleans on this trip was almost over and the ties between cultures was set in stone.

On the last night at a big outdoor concert venue, thousands of Cuban music fans came to see a show featuring the Trombone Shorty students, the Soul Rebels, Tank and the Bangas, Trombone Shorty, Cherice Harrison-Nelson and Cuban music sensation Cimafunk performing on the same stage in a song that united two cultures through the language we all understand: music.

Tuesday at 10 p.m. on Channel 4’s Eyewitness News, Eric Paulsen and photographer Steve Wolfram will continue their coverage of the group’s trip to Cuba with a look at some of the misconceptions and hurdles for Americans traveling to Cuba.