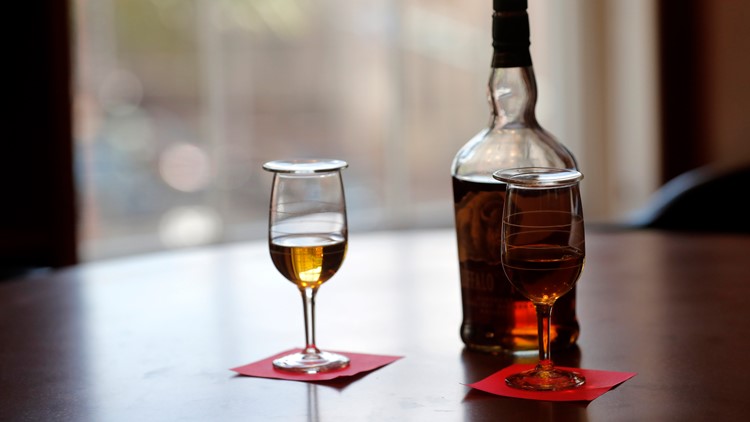 Photo by: AP
A whiskey sample is seen in a tasting room during a media preview for the Sazerac house, in New Orleans, Tuesday, Sept. 10, 2019. Visitors to New Orleans who want to learn more about cocktails will soon have a new place to go. No, it's not another bar. The Sazerac House is a six-story building on the city's famed Canal Street owned by the Sazerac Company, a Louisiana-based spirits maker, featuring the signature New Orleans drink called the Sazerac.Tasting is encouraged, and in addition to free samples given to visitors, there will also be special classes and tastings offered daily. (AP Photo/Gerald Herbert)

NEW ORLEANS — Visitors to New Orleans who want to learn more about cocktails will soon have a new place to go. No, it's not another bar.

The Sazerac Company, a Louisiana-based spirits maker, is opening the Sazerac House on October 2.

Described as an "immersive exploration of the spirited culture of New Orleans," the six-story building houses multiple floors of exhibits as well as a gift shop and the company's headquarters.

"We have created three exhibit floors that will showcase the history and traditions ... of the cocktail itself, featuring the Sazerac cocktail as our namesake," said Miguel Solorzano, the general manager. He said they expect 275,000 visitors the first year.

"People travel from all over the world, not only for our food, our culture but drinks," he said.

Visitors can walk through and learn about the city's cocktail culture and the various spirits the company makes, especially those used in the signature New Orleans drink called the Sazerac.

The Sazerac House
New Orleans The Sazerac House is one part history and traditions, two parts interactive exhibits and experiences, mixed with spirited events and a dash of rich New Orleans culture. Standing proudly in a historic building at the corner of Canal and Magazine, and just a short stroll from the original 1850s era Sazerac Coffeehouse, The Sazerac House will be an immersive exploration of the spirited culture of New Orleans.

Tasting is encouraged at the Sazerac House. Free samples will be given to visitors, and there will be special classes and tastings daily.

The Sazerac House will officially open to the public Oct. 2.

On the first floor is a distillery where the company will make rye whiskey, the key ingredient in a Sazerac. The custom-built still stretches up to the second floor and is visible to tourists walking outside.

But the first batch won't be ready to drink for six years as it has to age first. Distillery supervisor David Bock said the goal is to give visitors a feel for how the whiskey is made.

"We are going to show you how to do it on a small scale," he said.

Three of the floors are open to visitors while other floors will house things like the company's headquarters. There's an extensive rum exhibit which walks visitors through the origins of rum production and its close association with Louisiana's sugar production.

Visitors will also get to see how Peychaud's Bitters — another key ingredient to a Sazerac — is made and see it being bottled.

The bitters gets its name from creator Antoine Amadie Peychaud, who owned an apothecary shop in New Orleans in the 1800s. The exact ingredients in Peychaud's are proprietary but in the room devoted to bitters, visitors can sniff various dried herbs and botanicals like star anise or fennel seed that can be used to make bitters.

Over the decades the ingredients in a Sazerac cocktail have changed slightly. But served in a chilled old-fashioned glass with a twist of lemon peel, it's still a staple in many bars and restaurants across town.

It's one of a handful of cocktails closely associated with New Orleans though much more upscale than the hurricanes and hand grenades dispensed in plastic containers or souvenir glasses just a few blocks away on Bourbon Street or the daiquiris served at drive-thrus.

The Sazerac House joins the Southern Food and Beverage Museum as a more high-brow way to learn about the city's food and drink culture.