He captures Louisiana’s wetlands and coast line anywhere from 50 to 5,000 feet in the air. 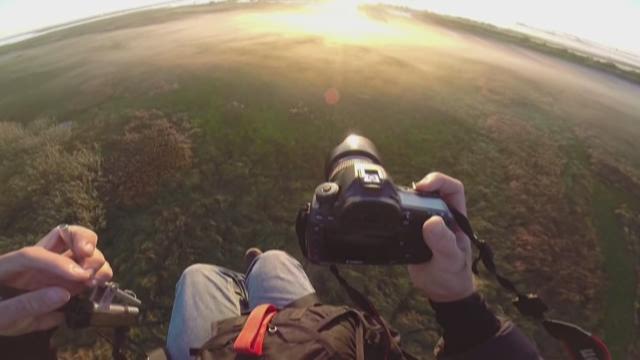 NEW ORLEANS – Louisiana offers a lot of picturesque scenery, but a lot of it is not all that easy to get to in order to see. One man found a creative way to not let that stand in his way.

Professional newspaper and magazine photographer Ben Depp uses a powered paraglider to get up in the air to photograph amazing scenery.

He captures Louisiana’s wetlands and coast line anywhere from 50 to 5,000 feet in the air.

“You can see dolphins in the water, wild boar, deer, flocks of birds, and it’s just incredible. You’re just flying along with birds coming underneath you and it’s an incredible experience,” Depp said.

Depp moved to New Orleans in 2013 and flying in on commercial flights, he could see the beauty of south Louisiana and wanted to explore it more. However, accessing our landscape is not easy.

So, he thought about a powered paraglider.

“I took a five-day training in Pensacola, Florida and then started doing it,” Depp said.

Depp says that his pictures often leave him surprised and even confused.

“I see things that I don’t know what they are. And sometimes take a photograph and come back down and then try to figure out what is what that I’m seeing,” Depp said.

“Part of the beauty of some of these photographs is that it’s not totally obvious what you’re looking at and so it requires for people to look twice and then kind of think of this landscape,” Depp said.

From Cameron Parish to St. Bernard, Depp turns to Google Earth for new places to explore.

Depp's photos are currently featured at The Gallery for Fine Photography on Chartes Street and in December they will be featured in The Ogden Museum of Southern Art.