The two are constantly pranking each other for videos as well. Chanen once called Juwan to tell him she was going to buy a seven-thousand dollar pair of shoes. 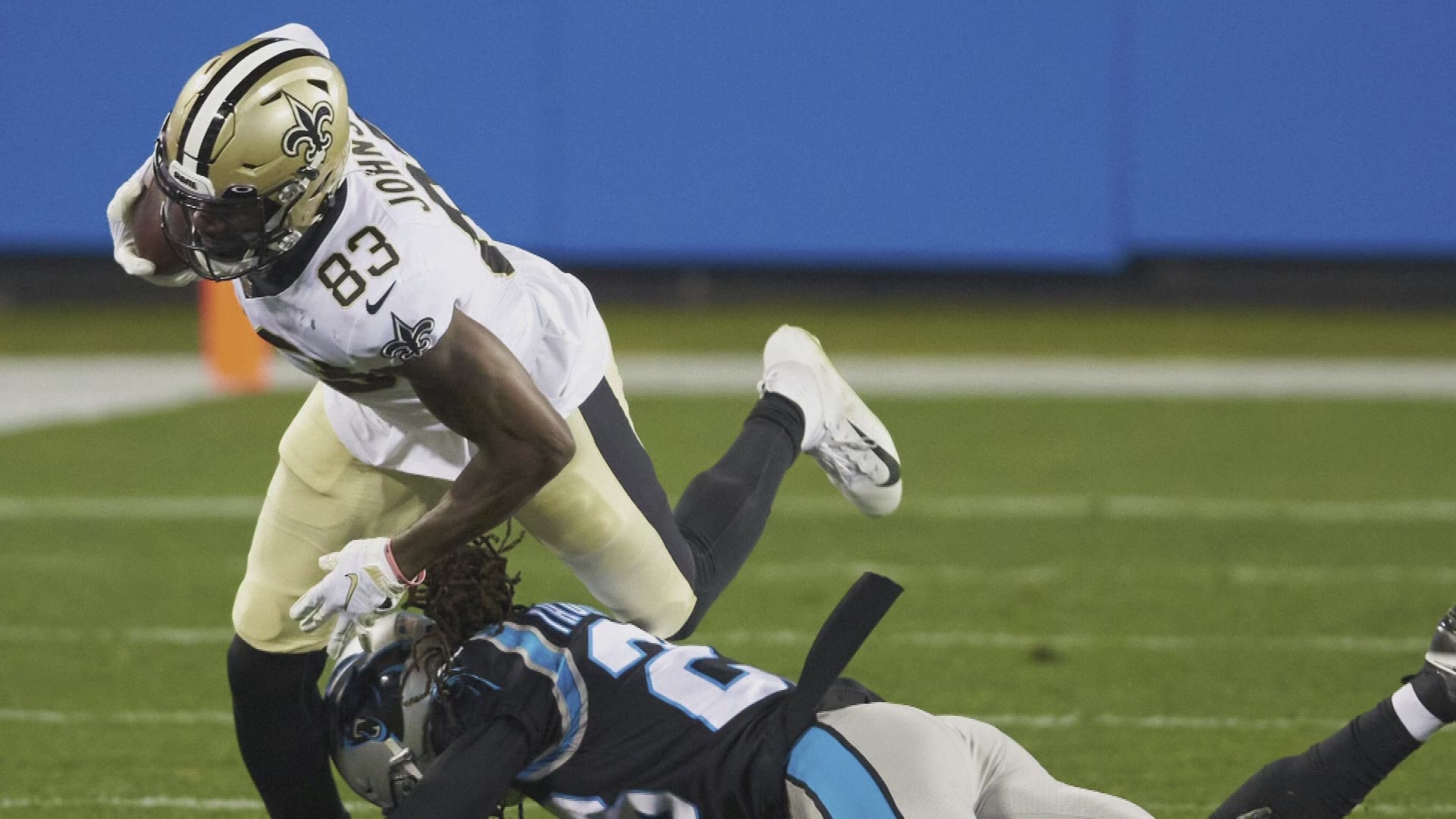 NEW ORLEANS — You probably recognize number 83, Juwan Johnson, from under the bright lights of the Superdome on Saints Sundays.

But you can also find him cracking jokes with his college sweetheart, Chanen Johnson, on TikTok.

They’re unapologetic and hilarious, and they’re walking hand in hand through their first year of marriage and life in the NFL.

“People really like seeing us, and knowing that we’re people just like them,” said Juwan, who is originally from New Jersey.

The Johnsons' love story starts years ago at Penn State. Their relationship was long distance for a while, as Chanen lived in her home of Los Angeles.

But then, last year, right before the pandemic began, they got engaged and eloped two weeks later.

By August, the Johnsons were moving to New Orleans.

“Everything has just been crazy, but it’s been a whirlwind. It’s been fun. It’s been really fun,” said Chanen.

“Fun” is a good way to describe Chanen and Juwan, and their 1.5 million TikTok followers would likely agree.

Their videos are dripping with sarcastic, sometimes self-deprecating humor. Chanen films satirical “Day in the Life of an NFL Wife” videos in which she pretends to fulfill her husband’s every ridiculous request.

The two are constantly pranking each other for videos as well. Chanen once called Juwan to tell him she was going to buy a seven-thousand dollar pair of shoes.

In another video, she pretends to call him from the seats of the Superdome, because she didn’t see him on the field.

“There was a point where I was over here, like, calling him at games, as if I would think he would answer,” she laughed.

“As if I’d ever answer,” Juwan echoed.

Not everyone understands the jokes, though. The pair frequently gets negative comments, and Chanen jokingly leans into the stereotype even further to respond.

“It’s fun. People always have a lot to say about people like me, or anyone who’s married to an athlete in general. It’s like, there’s always a stigma of who we are or what we expect in a relationship and stuff. And it’s cool to play around with that,” she said.

But the Johnsons share real moments with their followers, too. In January, Juwan recorded the moment he told Chanen he’d be playing in his first NFL game.

In the midst of a pandemic, it was a moment they’ve both made sacrifices for.

“I honestly spent a lot of the season, just like, I had to put myself away and put you on top,” Chanen said to Juwan. “Because we had to make sure that he was going to be healthy and that I wasn’t doing anything crazy to get him in trouble. And I didn’t want to mess him up, because he started playing.”

Although the Johnsons are only beginning their journey with the Saints family, they said they already feel the love from New Orleans, and it’s mutual.

“I just love everything about New Orleans. And then, they love the Saints,” said Chanen. “Obviously, that’s so nice. I don’t feel that really in L.A. I don’t feel like they’re obsessed with the local teams as much as they are here. Here, it’s like diehard Saints fans. So, I love it so much.”

Juwan echoed the love for the city,

“You can just feel the energy around people talking about this city,” he said. “Personally, I love the food. I’m a big food person. I love the crawfish, I love the po-boy. I love all of it.”

And after a year of firsts, they’re eager for year two.

“We had the most eventful year of our life for the first year of marriage. So, next year, it’s going to be a breeze,” said Chanen.

And they promise they’ll keep bringing their followers along for the ride.