Tracy and Sherrie Smith have done most everything together. So the 30-something sisters who share a Benbrook house together, and had dreams of becoming moms, decided why not do that together too. 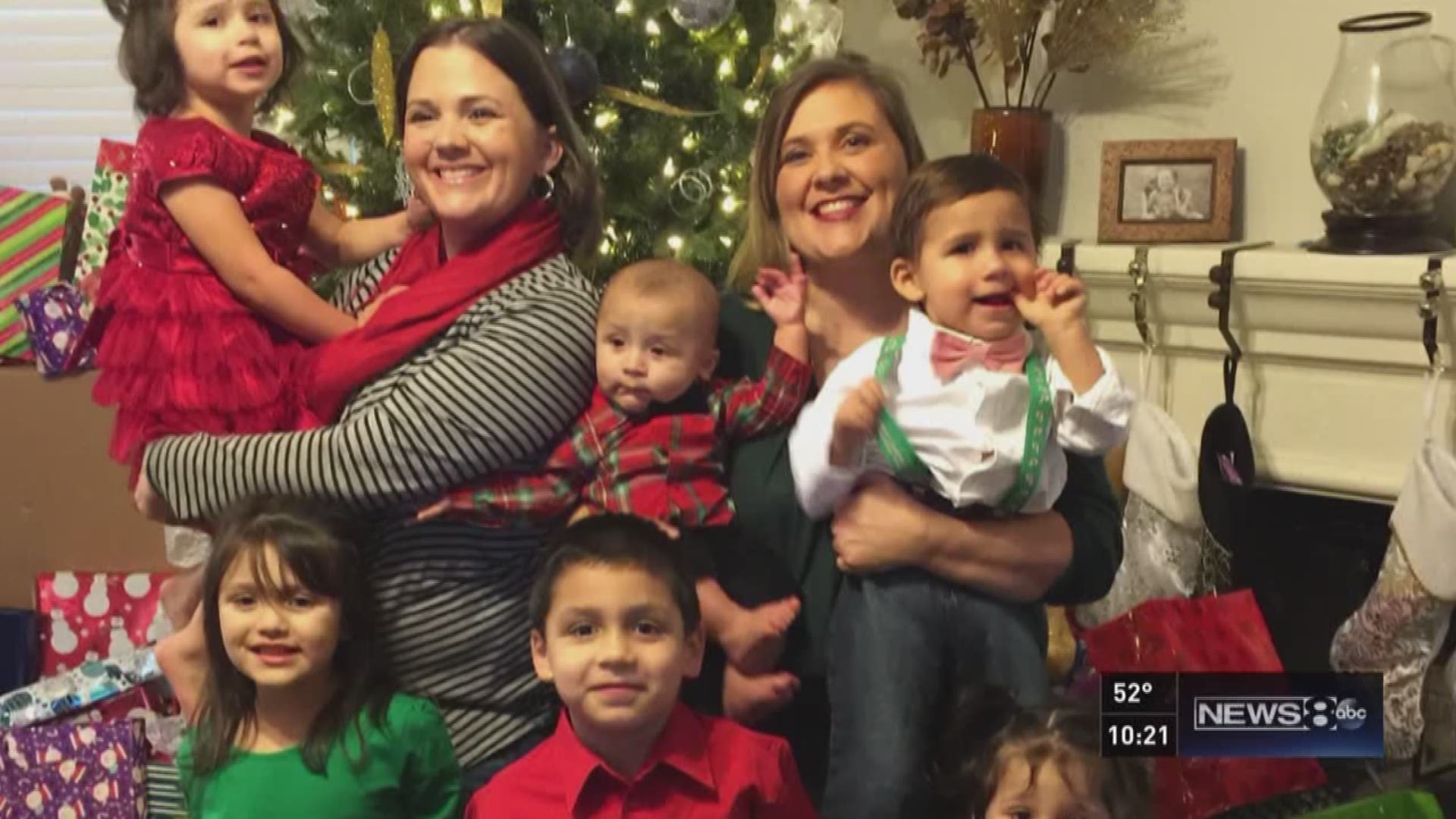 Tracy and Sherrie Smith have done most everything together. So the 30-something sisters who share a Benbrook house together, and had dreams of becoming moms, decided why not do that together too.

On National Adoption Day November 18th, they did just that – six times.

Their house southwest of Fort Worth is a lot noisier than is used to be. Aaron, 6, is the oldest, Bayla his sister the kindergartener, Emma and Olivia are four-year-old twins, Franco is three and Jake 17-months.

"Mommy, have two mommy,” Franco said during a family meal of pizza, broccoli, and grapes.

“Yes. You do have two mommies,” Tracy Smith answered.

"I'm blessed with a lot of really good siblings but Sherrie is my best friend,” said Tracy. “We do everything together.”

"You just lucked out with me,” joked Sherrie. “OK we both lucked out.”

“OK it was mutual. I’ll take it,” Tracy laughed.

"We're kind of like, if we enjoy hanging out with each other so much, why not just roll with it, you know,” Sherrie said.

They've lived together all their adult lives. Tracy has been there to help Sherrie through a series of health problems, including seizures and a coma at the age of 20. This is where we take a brief detour from our story to talk about Sherrie's love for the movie Titanic.

"I stuck my hands straight in the air and said 'I'll never let go Jack,’” Sherrie joked of her coma awakening moment.

"That was literally the first words out of a coma,” Tracy said.

"So they were like, she's gonna be fine,” laughed Sherrie.

They came from a blended family of their own. Three of their siblings were adopted. So when they grew up they knew they wanted to do the same.

But, together, they agreed to be foster parents to four brother and sisters: Aaron, Bayla, Emma, and Olivia.

"And they said well there's actually six,” Tracy said of the day she found out there were two more younger siblings. "And they said but nobody will take six. Nobody's crazy enough for that."

But they were crazy enough. They both said yes.

"Some days I'm like,” Tracy began to say before they said in unison “What have we done,” they both laughed.

The kids come from a drug-addicted biological mother. Their biological father is in prison. And since Texas alone has approximately 14,000 children in foster care on any given day, Tarrant County agree to let two sisters devoted to becoming joint parents, become two moms to keep six kids and a family together.

"God chose these kids for us,” said Tracy. "There are a lot of kids out there that just need people that will love them.”

And Friday morning at the Tarrant County Family Law Center in downtown Fort Worth, on National Adoption Day, in a courtroom lined with stuffed animals, they made it official. They were among 45 families who adopted a total of 70 children: the Smith sisters agreeing to offer a forever family to the most – the six siblings who now call both Tracy and Sherrie “mom.”

"The moment they came in the door I knew that those were our kids,” said Sherrie.

“They belong to us,” added Tracy.

Now parenthood, even in so-called "normal families", isn't without its pitfalls. They know that already. Vomit will do that to you.

“About six o'clock we looked over at each other in the morning and both of us had a twin on us and covered in puke ourselves and we were like ‘we're parents, we're officially parents,” they both laughed.

And in the event a man does finally enter one of their lives they have a plan for that too. Maybe houses on a cul-de-sac side by side.

"If a man comes along and he's the right one, awesome,” said Tracy. "It's going to take an even more special man to buy into this. Because this is weird,” she joked. “We know it."

What is not weird is that six siblings are still together, with parents who love them and who want to give them a future.

"I can't tell you how many times Sherrie and I will get a hug from one of them and say, you know what, this right here, this is what we did it for,” said Tracy.

And tonight, every night, thousands more children, wait for someone willing to accept the same.