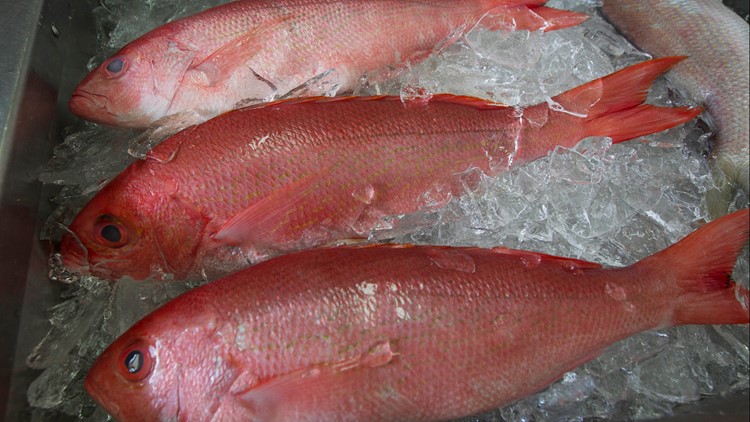 Photo by: AP
FILE - In this May 16, 2012, file photo, fresh red snapper is iced and ready for sale at Aquila Seafood in Bon Secour, Ala. The group that manages Gulf of Mexico fishing in federal waters says states can keep managing anglers' catch of red snapper. The popular sport and table fish is still recovering from nearly disastrous overfishing. The Gulf of Mexico Fisheries Management Council announced the decision Thursday, April 4, 2019 in Biloxi, Mississippi. (AP Photo/Dave Martin, File)

GULFPORT, Miss — (AP) — A group of Louisiana fishermen and oystermen who oppose diverting freshwater are recruiting allies in Mississippi.

The Sun Herald reported that concerns about Mississippi River diversions were raised at a Thursday meeting in Gulfport focusing on damage to the Mississippi Sound following two openings of the Bonnet Carre (BAHN'-ee KAYR'-ee) spillway this year.

George Ricks, a charter boat captain and president of the Save Louisiana Coalition, addressed a meeting of about 200 people. Louisiana officials are seeking to divert freshwater and sediment from the Mississippi River into the Breton Sound in an effort to rebuild eroding wetlands downriver from New Orleans.

Ricks said the Mid-Breton diversion would introduce freshwater into the saltwater of the Mississippi Sound over a longer period of time, bringing additional damage to seafood and tourism.

"The salt water species we rely on can't survive on fresh water," Ricks said. "This has been the worst year for speckled trout I've ever had."

The Save Louisiana Coalition represents seafood and fishery interests.

Dennis Lambert — who worked on the Breton diversions until he began questioning the project — said the Coastal Protection and Restoration Authority Board in Louisiana already has spent about $200 million.

"So you know how hard it is to stop that," he said. So much money has been spent they can't give it up - they don't want to give it up," he said.

"The only people that can change what is going on are the people in this room and the state of Mississippi," Lambert said.

The meeting came in the aftermath of the U.S. Army Corps of Engineers opening the Bonnet Carre Spillway north of New Orleans an unprecedented two times. The spillway was open for a record 118 days before it finally closed in July. The freshwater prompted a widespread algae bloom that led all Mississippi coast beaches to be closed to swimming and also killed many oysters and shrimp.

Now that the spillway has closed, observers say a fish kill could occur as the oxygen levels stabilize and the waters return to normal salinity.

The rules that regulate when the spillways open were written almost a century ago in the 1920s and 1930s, said Moby Solangi, executive director of the Institute for Marine Mammal Studies in Gulfport. The Corps of Engineers regulates when the spillway is opened based on the 1928 Flood Control Act.

"All of you need to recognize your power," Solangi told the audience and urged them to talk to the state's congressional delegation in Washington and ask them to change the rules and provide "flexibility and direction" for the openings.