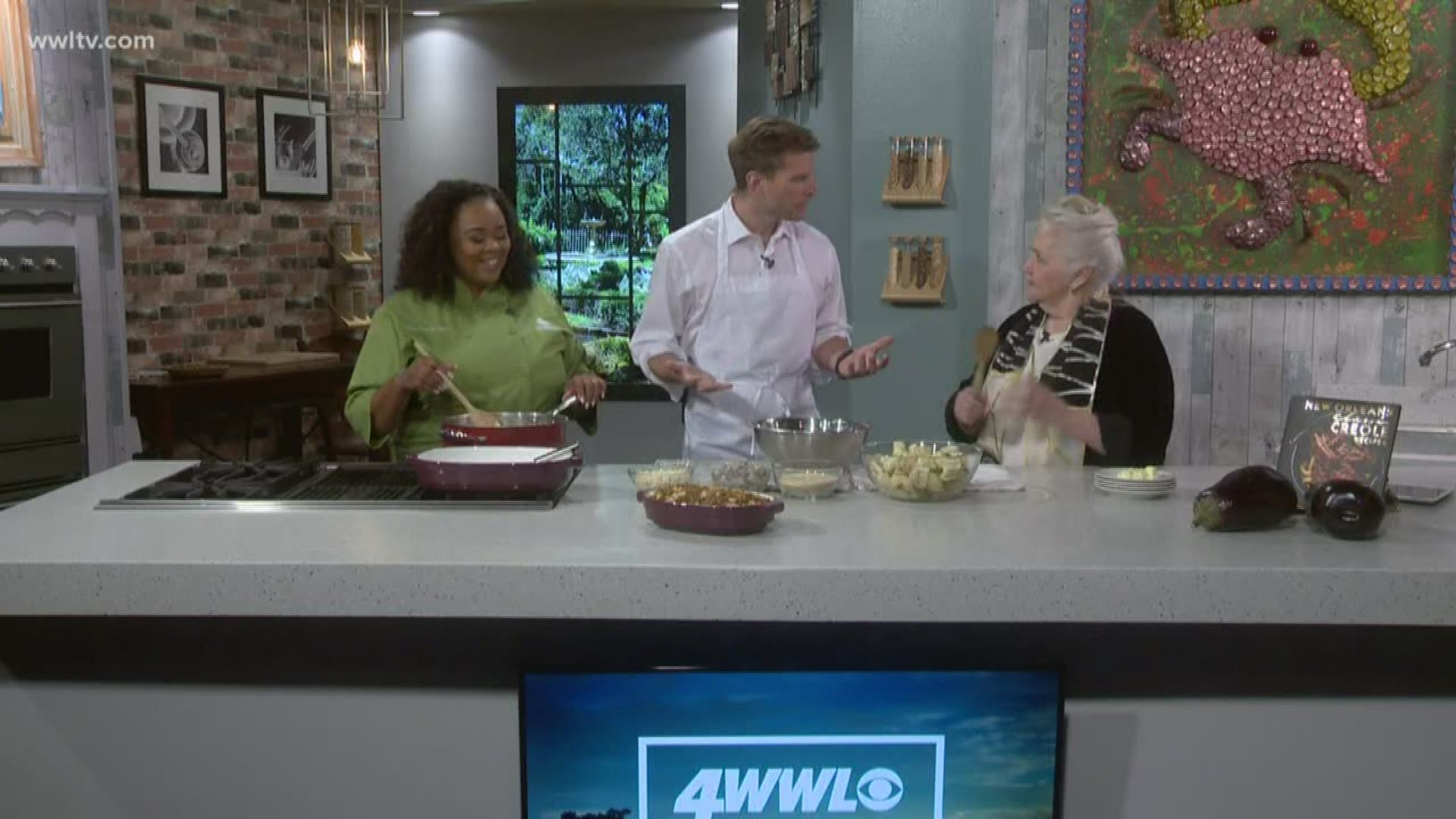 What better way to celebrate this Thanksgiving and honor the legacy of famed chef Leah Chase, who died this past year, than by adding two of her dishes to your Thanksgiving table? Cookbook author Kit Wohl shares two of the beloved chef's recipes.

This savory combination of shrimp, crabmeat, and seasonings creates a local favorite. A friend’s child once argued that “little kids shouldn’t have to eat purple food,” in hopes of avoiding eggplant. Peeled, prepared, and served in a casserole dish, there’s nary a purple shade to be seen. Leah’s Crabmeat and Shrimp Farci is reason enough to simply stand in front of the chaffing dish, effectively blocking any other enthusiasts.

1. Cut eggplants in half. With a tablespoon, scoop out the insides carefully, leaving about 1/4-inch shells. Cut the removed insides into small cubes. Soak the shells and cubes in separate pans of water for 15 to 30 minutes to draw out any bitterness. Let shells and cubes drain well on paper towels.

2. In a heavy saucepan melt the butter and add the cubed eggplant, shrimp, and onion. Cover and cook over medium heat for 40 minutes. Add the garlic, parsley, salt, and cayenne, stirring well, and cook, uncovered, long enough to reduce as much of the liquid as possible. (Shrimp and eggplants give off quite a bit of juice.)

3. Preheat oven to 350 degrees. Stir in the crabmeat and cook for 10 minutes more. Remove from heat and add the thyme leaves and breadcrumbs, stirring until mixed in well. Stuff the well-drained shells with the eggplant mixture.

Place in baking pan and sprinkle with more breadcrumbs. Dot the tops with butter and bake for 20 minutes.

There’s something about a sweet potato pie that feels like home, especially at Dooky Chase’s. Not only is Leah’s sweet potato filling as succulent as it promises, but her pecan crust is unique.

½ to 1 cup granulated sugar to taste

Preheat the oven to 375 degrees F.

Roll the chilled pie dough into a 12-inch round and press into a 9-inch pie pan. Flute the edges. Bake for 10-15 minutes until the crust is set and beginning to brown slightly. Remove the pie pan from the oven and let it cool.

Put the sweet potatoes into a medium pot and cover them with water by an inch. Bring to a boil. Boil slowly until the potatoes are tender with no absolutely no resistance at the center when pieced with a fork. Or, pierce the potatoes and place them on a baking sheet and roast in a 375 degree F oven until tender.

Drain off the water or peel and mash the potatoes with a potato masher. Do not use a potato ricer or food processor.

As you mash the potatoes, add the sugar, cinnamon, and nutmeg; then whisk in the eggs, milk, and vanilla. The butter goes in last.

Once the filling is well-mixed, pour it into the baked pie crust. Sprinkle the top of the pie with more ground cinnamon. Bake for 20-25 minutes until the filling is set and the edges of the crust have browned.

Cool the pie to room temperature and serve with whipped cream or vanilla ice cream.

1/4 cups ice-cold water, or as needed

In a food processor, pulse together all the dry ingredients and the butter into short bursts until the mixture forms pea-sized lumps. Add the water through the feed chute as you pulse until the mixture forms a stiff dough and pulls away from the sides of the food processor bowl. Or, Simply use a pastry hand blender to blend the dry ingredients until they resemble small peas in size, add the chopped pecans, then using a rubber spatula, gently form the mixture into a 6-inch disc while slowly adding the liquid. Wrap the dough in plastic; chill for one hour. The dough can be made in advance. It can be kept refrigerated for several days and even frozen.