'It is the highlight of my day': McKinney boy and trash truck fanatic makes friends with neighborhood driver

“I got to know his mom and dad and they said ‘You are his hero. It is what he looks forward to all week long,’” trash truck driver Austin Ferguson said. 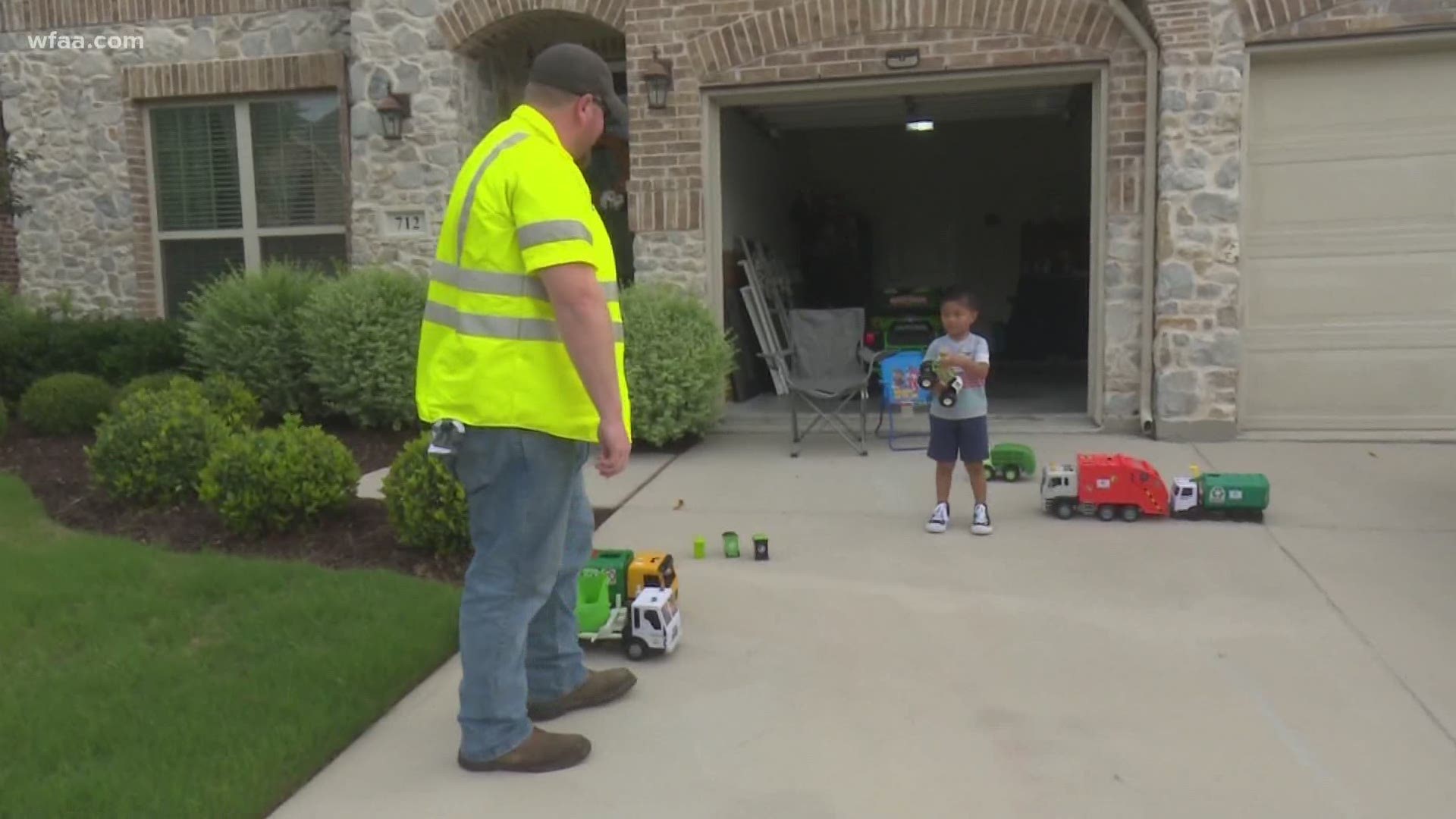 MCKINNEY, Texas — Every Friday morning, 4-year-old Enzo Buemio gets up early and waits in his driveway. Because in the McKinney neighborhood where he lives, Friday is trash pickup day.

His mother said his fascination with garbage trucks started when he was as young as 2.

“He was always teaching us about how some trash trucks are back loaders or front loaders,” laughed Maria Buemio.

“They are helpful,” said Enzo trying to explain his fascination. “They take away the stinky trash.”

And one day about a year ago, it caught someone’s attention.

“I got out and tried to talk to him. I do not know if starstruck is the right word, but he was too nervous to talk to me,” said Austin Ferguson, a driver for Waste Connections, a waste management company.

Ferguson’s route takes him by Enzo’s house on Friday mornings, and he took notice of the young boy who was always out in the driveway watching and waving as the truck passed through collecting trash and recycling.

“I got to know his mom and dad and they said ‘You are his hero. It is what he looks forward to all week long.’”

Although Enzo was nervous at first, the two have forged a friendship that now includes a weekly Friday meetup for a few minutes when Ferguson is passing through.

Enzo usually greets him with water and snacks, and the friendship has grown to include even more special days. Enzo invited Ferguson to attend his birthday, an offer that was too good to miss.

And when it was Ferguson’s birthday, Enzo had a cake waiting for him and sang "Happy Birthday' when he dropped by that next Friday.

He has become such a fan, Enzo’s toy trucks now have homemade labels taped on them with the Waste Connections logo and Ferguson’s truck number.

But the biggest surprise came after one Friday when Ferguson left Enzo hanging. A scheduling change meant another driver was sent on a pickup at Enzo’s house when he was expecting Ferguson. So the next time, Ferguson called two other drivers and arranged a special trash truck parade to make up for it.

“The three of us all paraded down the street and pulled in front of his house. He walks out, and he is just speechless. He ran up and wrapped my legs up in a hug,” said Ferguson.

Throughout his regular routes, Ferguson said there are a few children who are regularly out waving at him every week, showing gratitude he did not expect to see when he began driving last year.

“It is the highlight of my day and the best part of my job.”