Teacher wins new car: “I hear about these things happening all the time, just not to people like me"

An Olympic High School teacher started her morning as usual on a Zoom call with other teachers. A few moments later she receive the surprise of a lifetime. 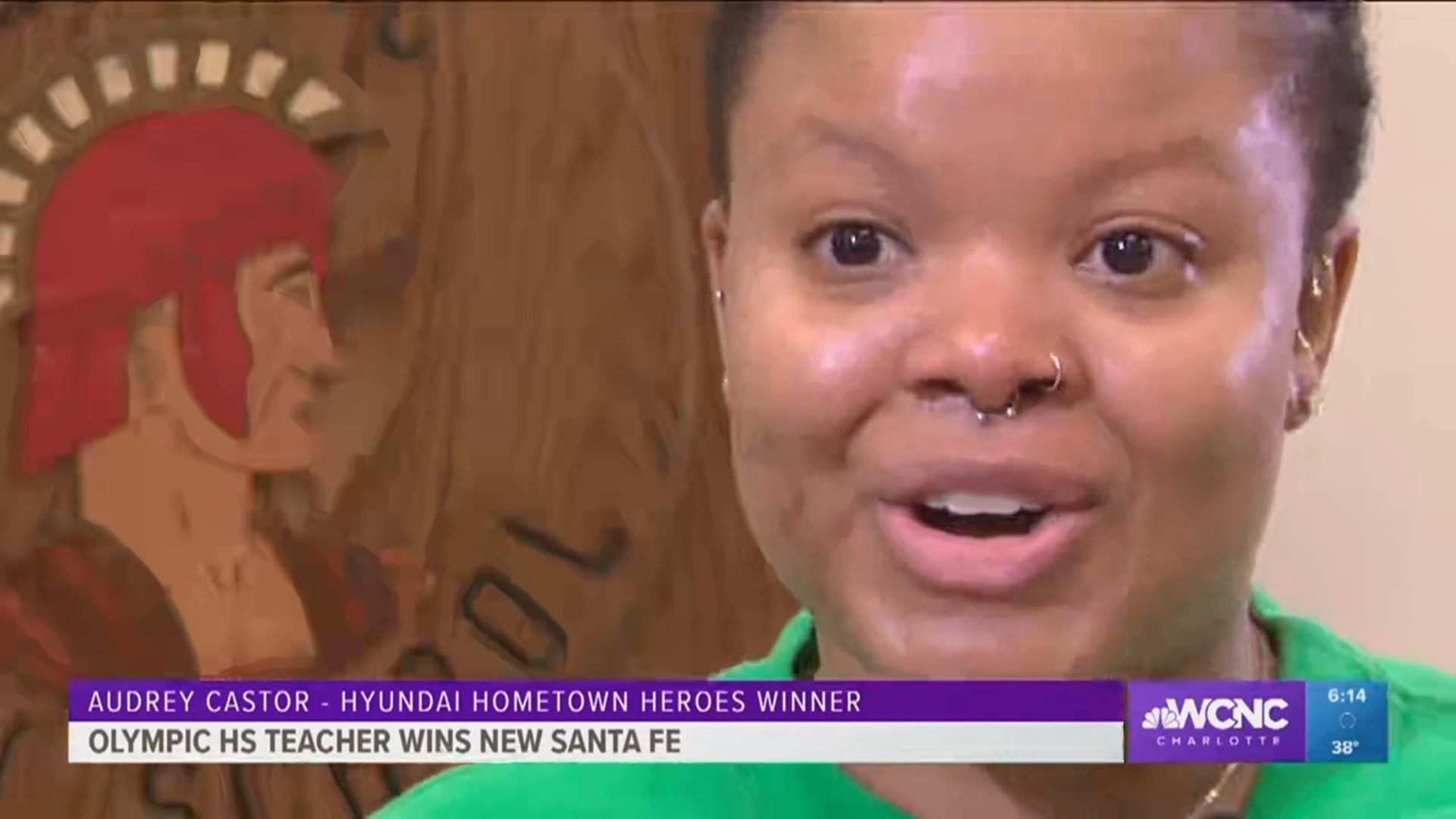 CHARLOTTE, N.C. — Olympic High School teacher Audrey Castor thought she was being trolled when she learned she was being honored by WCNC Charlotte’s Hyundai Hometown Hero program.

"At Hyundai, better is what drives us and we believe that you are making the world a better place.  And for that you deserve to be recognized and rewarded," said Jim Keffer, Charlotte Area Hyundai Dealers.

Each week the teachers of Olympic High School sit in their empty classrooms and join a Zoom staff meeting with the principal.

Castor joined the meeting as usual, but was surprised when WCNC Charlotte anchor Ben Thompson interrupted the meeting looking for her.

“Audrey Castor.  Are you on this Zoom call?” Thompson asked.

“I am,” she replied cautiously.

And that’s when she learned she was named the Hyundai Hometown Hero.

“At first I didn’t know what to think,” Castor said.  “I thought I was being trolled.  I really did.  My name out of everybody else’s? Why me?”

Castor then saw a 2020 Hyundai Santa Fe sitting outside her classroom in the parking lot.  She walked toward the car in disbelief.

“Is this for real?” she asked.

As she walked closer to the car she wiped away tears.

This year has been a tough year for many people, especially school teachers.

“I feel like all of us, we, we haven't had the experiences of teaching through a camera,” he said.  “It is not the same as being in a classroom at all.”

This school year teachers especially have been under immense pressure amid a new era of online learning.

“We're teaching virtually in the same room by yourself for like eight hours,” Castor said.  “It is pretty depressing. Try to make the most of it.”

Alison Carpenter is a new teacher at Olympic High School.  She says Castor helped her make the transition to a new career in a challenging time.  She said Castor was working two other jobs and was dealing with her own troubles.

“We were meeting online and we were going to meet in person and it turned out Audrey’s car wouldn't turn off and she couldn't actually go anywhere because she couldn't leave her vehicle,” Carpenter said.

“During COVID that wasn't something I had, so it really put me in a predicament where I was stressed out,” Castor said.

It’s that honest, relatable, hard-working approach that makes Castor a favorite with students and co-workers alike.

“I honestly love being able to be part of my student's journey, seeing them grow, seeing them understand things, seeing them take things I teach and bring it to a different, a higher level,” Castor said.  “But at the same time, what I love the most is them opening up to me. You know, it's more than just being a teacher to these kids.”

Castor paused because she said she was getting emotional talking about her connection with her students.

“I'm sorry, I'm getting emotional. I find myself kind of like a big sister to them,” she said.

Castor was named the Hyundai Hometown Hero for her work in the classroom and also outside.

The association has grown to eight executive board members and 150 general members.

“To be able to recognize people like Audrey who are doing really great stuff right here in our community, it just never, ever gets old,” said Keffer.

As Keffer handed Castor the keys to her new car, she still couldn’t process what was happening.

“I hear about these things happening all the time, just not to people like me or like in our circle,” she said.  “So yeah. It's just like, I can't believe it.”