A look at oil spill readiness 7 years after BP 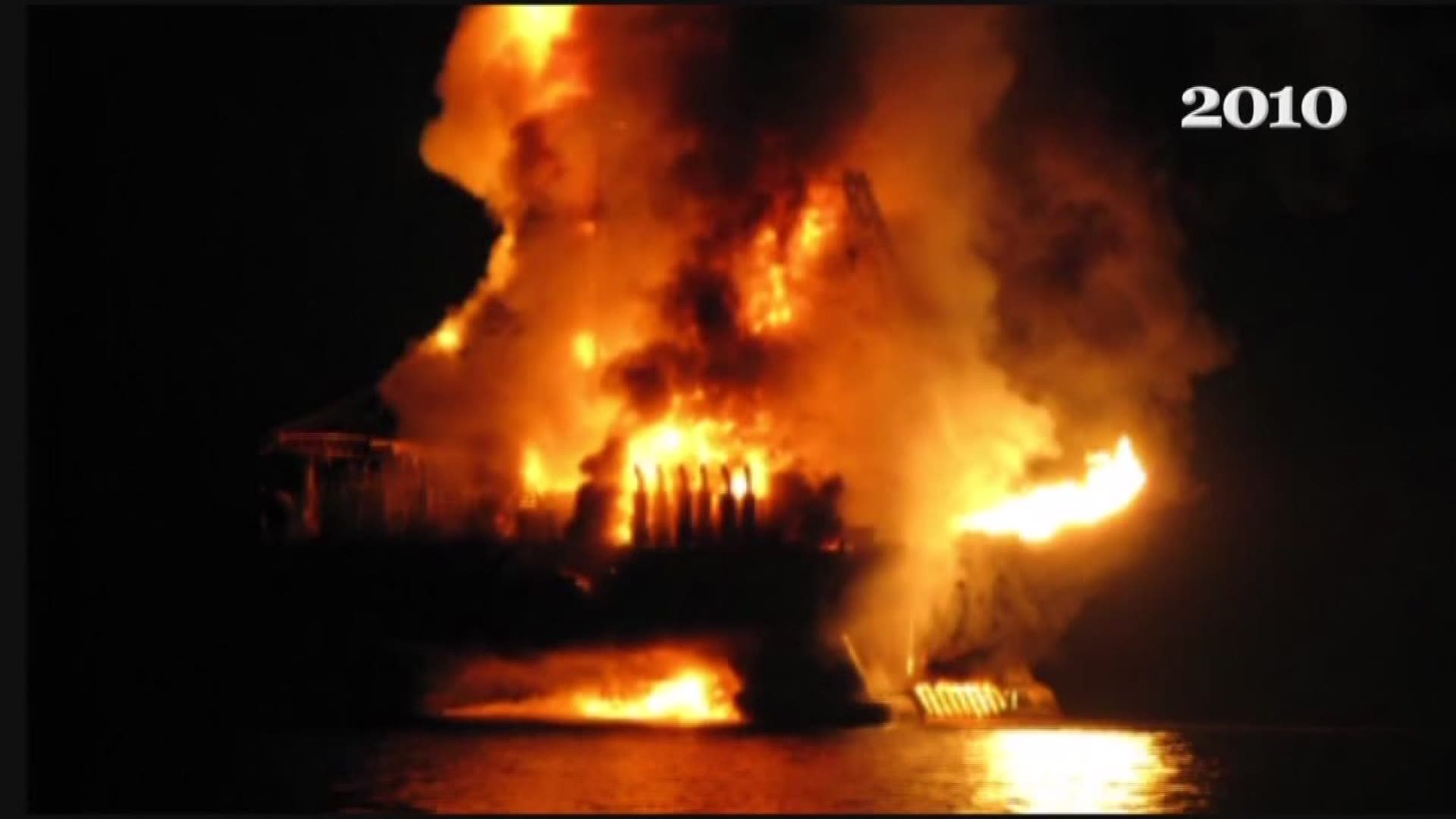 That’s because, in the seven years since the Deepwater Horizon oil rig exploded and set off the worst environmental disaster in U.S. history, an average of more than four chemical spills in the Gulf of Mexico were reported to the U.S. Coast Guard per day, according to an analysis of government data by the global environmental group SkyTruth.

That’s just based on the 12,000 incidents that were reported to the authorities. Henderson has been the first to report dozens of unclaimed spills during his monitoring flights. Plus, several investigations, including some by WWL-TV, have exposed attempts by various oil companies to ignore or cover up spills or even to intentionally dump oil in the water.

When oil companies take responsibility and report their spills to the Coast Guard, as required by law, there’s little incentive for them to report accurate volumes – volumes that could later be used to assess negligence penalties against the companies.

A 2016 study by oceanographer Ian MacDonald at Florida State University matched satellite imagery with 66 incidents that had been self-reported by oil companies. MacDonald’s team used a well-established method to estimate spill volume based on the satellite photos. Those estimates were, on average, 13 times larger than the volumes the companies reported to the federal authorities.

That’s why Henderson makes it his mission to post visual evidence of as many spills as possible on his Vanishing Earth blog.

“We know that there’s thousands of leaks a year – leaking wells, leaking pipelines. But if the public doesn’t actually see the leaks, visually, then it’s like they never happen,” Henderson said on a recent flight with a volunteer pilot from the nonprofit aviation group called SouthWings. “Even if it’s not a huge leak, it’s just evidence that these problems are happening.”

The rate of offshore spills has been declining steadily since 2012, along with the industry’s drilling activity in the Gulf.

While depressed oil prices have curtailed investments in new Gulf operations, the industry has invested more in preparing for accidents and improving spill containment and cleanup. BP’s 2010 spill, which went on for nearly three months and dumped 200 million gallons of crude in the Gulf, prompted the industry to spend millions of dollars on new well-plugging and spill containment technology.

At the forefront of that effort is Clean Gulf Associates, an industry cooperative that represents 99 percent of all oil and gas operators in the Gulf of Mexico.

“I have a lot of years under my belt of responding to oil spills from a regulatory standpoint, and now I’m in a position to do my best to try to help make the industry better, and they’ve responded accordingly,” Paskewich said.

Clean Gulf’s members, the oil companies, have poured around $100 million into the cooperative since BP’s Macondo well blowout, allowing it to increase its assets nine-fold, Paskewich said. It bought new vessels that can go in the shallows or out to the deepwater Gulf. It deploys skimmer boats, barges, equipment and specially trained crews at eight locations from Venice, La., in the east to Aransas Pass, near Corpus Christi, Texas, in the west.

Paskewich says it’s not exactly a “firehouse on every block,” but it’s more than enough coverage to get cleanup crews and vessels where they are needed, quickly.

“It’s so much better than it was before Macondo,” Paskewich said. “If there was a lesson-learned, that lesson was followed.”

The first lesson is that there wasn’t enough of the floating surface barriers called “containment boom” at the ready when BP’s Macondo well blew out on April 20, 2010. The boom is used to keep surface oil from drifting into coastal marshes and other environmentally sensitive areas. It’s also employed to funnel and whisk oil through special brushes for collection on boats, where it can be separated from water and sold at market, just like the crude collected properly through pipelines.

Spill responders, including Clean Gulf Associates, lost precious cleanup time waiting for orders of the boom to arrive from suppliers around the country.

“So we thought, let’s eliminate all the logistics associated with the movement of that boom,” Paskewich said. “Let’s build something that the boom is already on.”

They patented a new boom spooling system, so they can keep nearly 5 miles of boom on a barge and deploy it at a spill site. And they addressed other lessons learned from Macondo, installing infrared cameras and special radar so they can skim oil at night; and gyrostabilizers to keep the boats steady in rough seas.

Both of those issues caused major delays in the collection of oil from the Macondo leak seven years ago.
Clean Gulf’s flat-bottom vessel can operate in shallow near-shore environments. New 95-foot skimmers can get to deepwater oil fields quickly and can hold up to 10,000 gallons of oil-and-water mix in two storage tanks in their hulls.

That’s enough to handle the vast majority of spills in just one trip, without having to use contractors or fishing vessels to augment Clean Gulf’s assets. Spills often stretch for miles in a surface sheen, without leaving any recoverable oil on the surface. Those sheens dissipate too quickly to be recovered, so Clean Gulf only responded to 12 spills in 2016, Paskewich said.

“Despite what the public may see or feel, the industry is very safe so the spills aren’t very prominent and they happen very sporadically and spread out,” Paskewich said. “Nevertheless, we have to be ready to respond rapidly.”

The last spill that required a larger response was a Shell Oil spill last May, in the Gilder Field about 90 miles south of Port Fourchon. About 88,000 gallons spilled. Clean Gulf called in other assets and used five vessels to clean up the oil in three days.

There is one larger spill that’s not being cleaned up at all anymore: a patch of wells owned by bankrupt Taylor Energy have been leaking oil east of Venice since September 2004, when Hurricane Ivan downed a Taylor platform and caused mudslides on the sea floor.

Last year, New Orleans-based Taylor sued the federal government to return oil response money it had placed in a trust, claiming nothing more can be done to contain a slow leak that geologists estimate could last another 100 years.

“Every time you come out here you can see a miles-long rainbow sheen and there’s thick brown crude oil within that sheen,” Henderson said, snapping photographs from a prop plane. “It’s certainly not harmless.”