Complaint says Entergy recruited charities to speak on their behalf

A compliant was sent to the Treasury Department and the IRS and those filing the complaint are accusing the company of using their charitable foundation to gain support of their power plant.

"Entergy seems to have no shame.,” Attorney Sascha Bollag said.

The possible violations center around the Entergy Charitable Foundation.

“The average person thinks that charities are suppose to--the goal is to help people. To be a charity. To do good. And it appears in this case, there was an ulterior motive here,” Bollag said.

Bollag is one of several people part of a formal complaint asking for a full investigation against the foundation. The complaint alleges Entergy drafted letters to non-profit organizations referred to as “community partners” asking for their assistance. 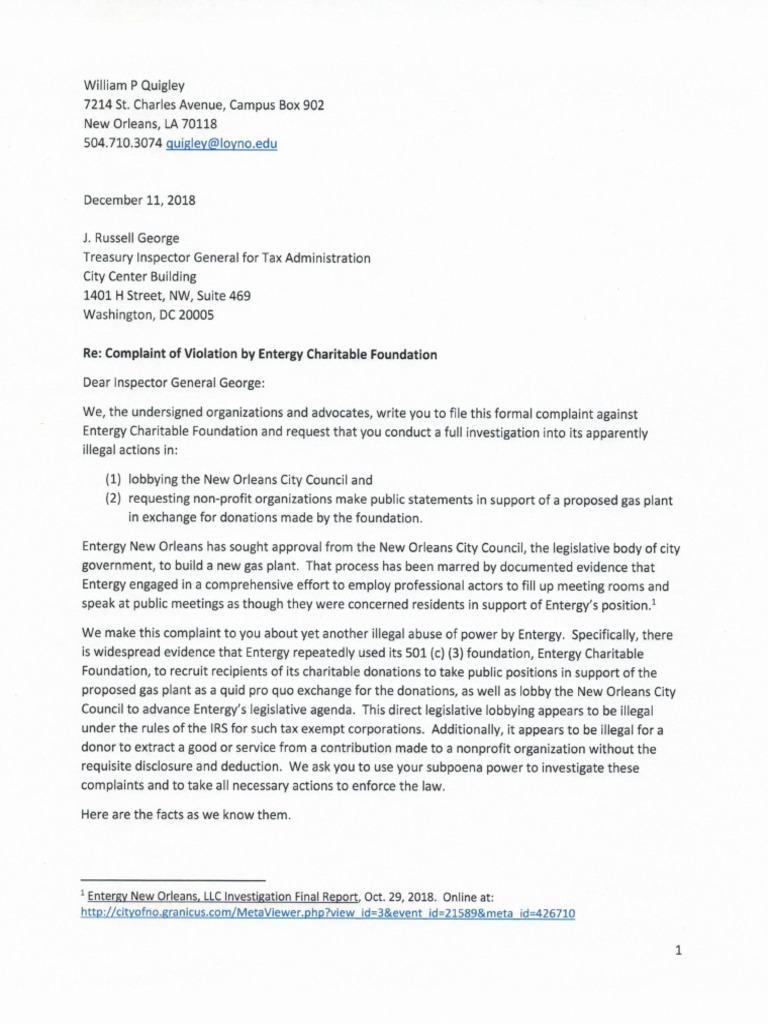 18.12.11 Letter to Treasury Insp Gen Entergy Charitable Foundation
A letter by Attorney Bill Quigley, on behalf of the DSCEJ and other organizations, was sent to the US Treasury Inspector General requesting a full investigation into apparent illegal actions by the Entergy charitable organization.

"In those meetings, the Entergy Charitable foundation recruited 19 organizations to speak on their behalf--basically as a quid pro quo for donations,” Bollag said.

When Eyewitness News looked back at the independent report released in October and several organizations spoke in favor of the power plant at City Council meetings.

"I think many of these organizations depend on such donations and they're caught between a rock and a hard place in such situations where they need this money--your donor is asking you to do one thing but it goes against the interest of your members or the people you're supposed to serve and I think that's very concerning for us,” Bollag said.

Nguyen, along with dozens of others, made several protests against the plant before City Council approved the plant last March.

"The community deserves to have the right to have clean air, a safe place to live...just as Metairie, just as Kenner. And we're not getting our fair shake in that,” Nguyen said.

Eyewitness News reached out to Entergy regarding the complaint filed. The corporation issued the following statement in part:

"The assertion that Entergy would support charitable organizations for any reason other than the causes these organizations serve is patently false--offensive and unfair to the people who dedicate themselves to helping their communities."

Those who filed the complaint say they’re still waiting to hear back from the IRS and Treasury Department.