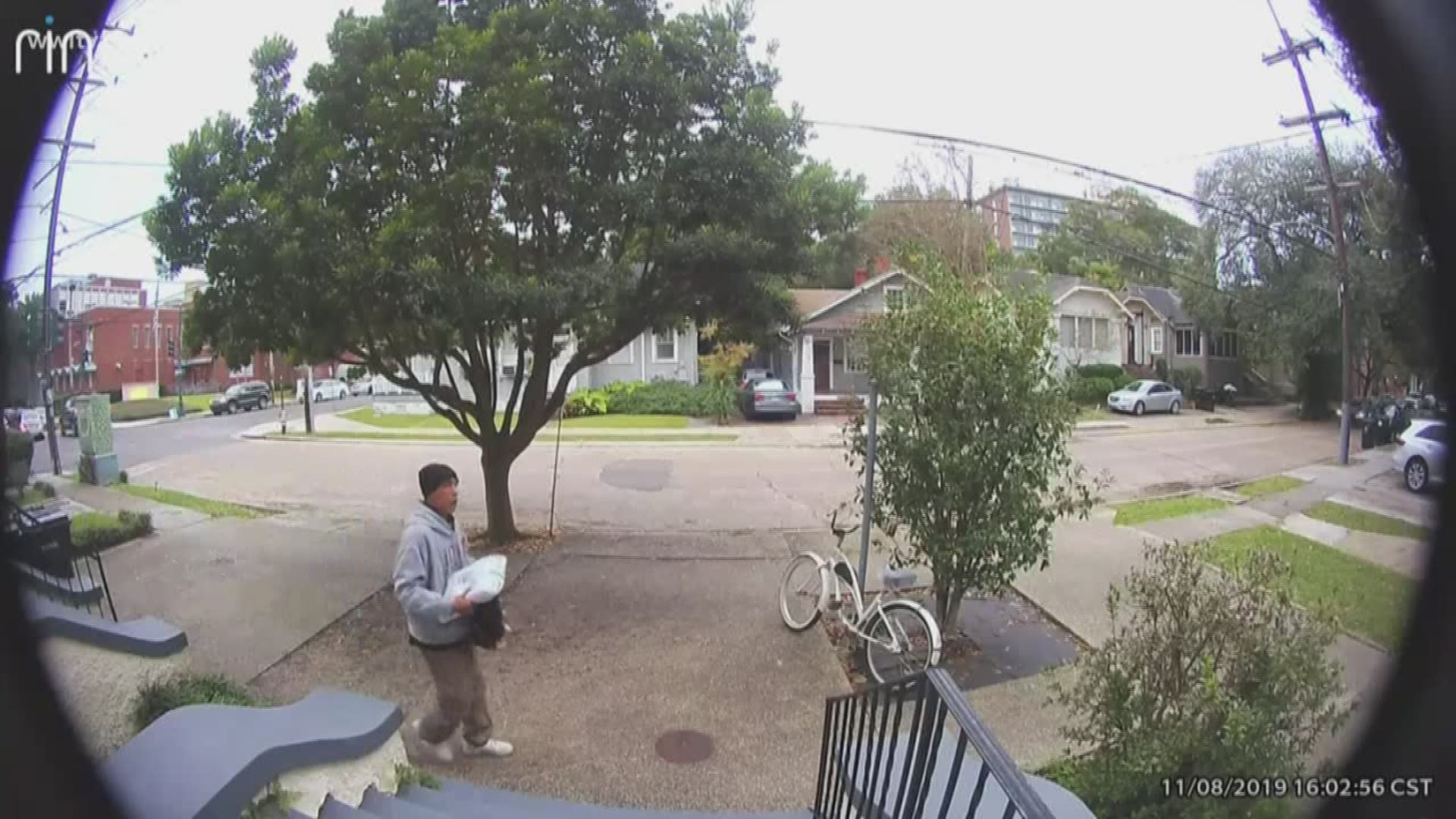 NEW ORLEANS — Police are searching for a man caught on camera stealing a package off a front porch in Uptown last week, the latest in a growing list of "porch pirate" cases in New Orleans this month.

Surveillance video shows the moment an unidentified man walks up to a home in the 2100 block of Calhoun Street, next to Tulane University's campus, to take a package from the victim's property then bike away.

Police say the theft happened around 4 p.m. on Nov. 8, but was just one of several cases of broad daylight package thefts reported in the past weeks in New Orleans. A new study out last month reports shoppers in Louisiana are the fourth most at risk in the country for package thieves, with more than 2,400 larceny thefts reported per 100,000 residents.

On Nov. 6 at around 2:14 p.m., another man was caught on camera entering a yard in the 3700 block of Camp Street and taking a package from the porch, then ripping it open and putting the items in a bag before tossing the box away.

Witnesses reported the man then went into nearby yards to look for packages to steal before also fleeing on a bicycle.

In that case, the suspect was wearing a white t-shirt, blue bike helmet, black pants, black tennis shoes and a black backpack while committing the crime.

On November 3, a man wearing a neon yellow safety vest walked to the front of a house in the 2900 block of Baronne Street and tried to grab a delivery around 6:45 p.m. However, he was confronted by a resident and ran off empty handed.

Police officials are investigating all three incidents and ask anyone with information that could lead to arrests to call the NOPD at 504-658-6060, or Crimestoppers at 504-822-1111.

RELATED: Here’s what you should do if your Amazon package is stolen by a porch pirate

Besides cameras, police provide a few other tips to fend off porch thieves. They include scheduling deliveries for when you are home, requesting a signature or providing instructions for the delivery person, such as to “hide behind the grill,” or “leave at the back door.”

Fedex, UPS and Amazon have policies that state once a package is delivered, it's up the costumer to get it off the porch. But these companies all provide safe places where you can pick up your packages, like ‘Amazon Locker.’ UPS has their access points and Fedex also allows to you to send your package to anyone of the 9,000 Walgreens locations across the country.