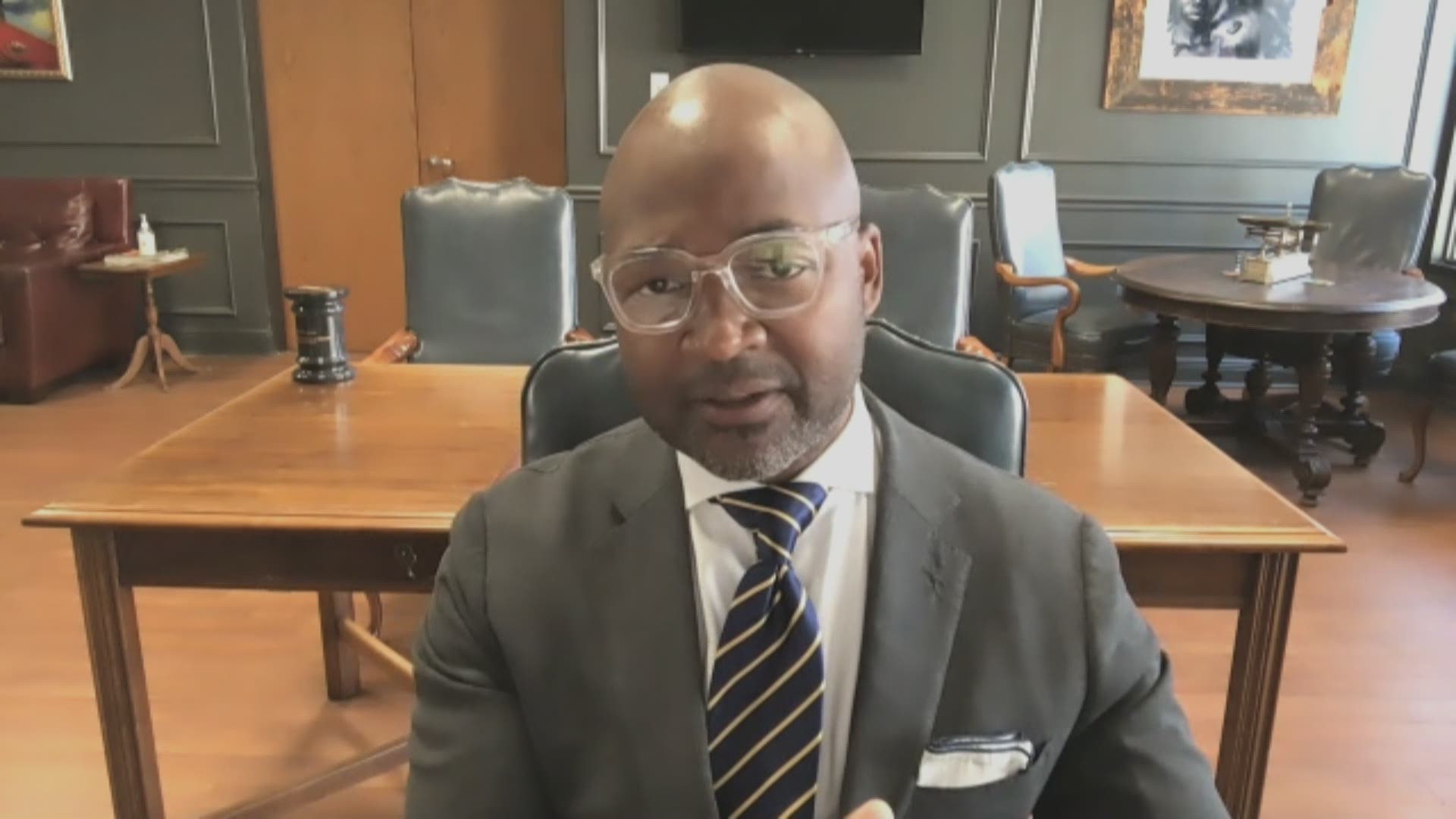 NEW ORLEANS — In an exclusive interview with WWL-TV, Orleans Parish District Attorney Jason Williams defended his decision to prosecute a pair of teenagers accused of a Jan. 3 murder as adults despite a campaign promise to keep juvenile crimes out of adult court.

For more information on the controversial indictment, click below:

You can watch the full interview here. The transcript is below the video.

Ed. Note: This is a raw transcript of a live, on-air interview. Grammar and sentence structure may not be completely correct.

Sheba Turk: Two 15-year-old boys are being charged as adults in the fatal shooting of Anita Irvin-LeViege back in January. This has stirred up a lot of controversy around Orleans Parish District Attorney Jason Williams, and has one group even calling for his removal.

Families and Friends of Louisiana's Incarcerated Children released a statement saying that Williams broke a campaign promise because during the campaign, he said that kids will not be tried as adults. Instead of incarceration, that group suggests counseling and other rehabilitation services for troubled teens.

And District Attorney Jason Williams is joining us now with more on his decision. He's released a statement on that decision and spoken publicly about it, so we appreciate you coming on this morning to explain more. Thanks, Jason.

Jason Williams: Good to be with you, Sheba, good morning.

ST: Good morning, and yeah, let's just start with the basics here. What was your logic behind this decision, why did you choose to try these children as adults?

JW: You know, Sheba, this is not a tough decision for me and it's not one that I took lightly. My son is 15-years-old, I see these young men the same way I see my son.

But I didn't run for DA to make friends, I ran to make the city safer, and this is absolutely the right decision in this particular situation. There are limitations in the juvenile justice system. And these individuals, and I just heard the comment, you know, count— we, this is not just about counseling. Counseling is not going to properly bring justice in this case. The limitations of the juvenile justice system would mean these individuals could serve as little as three or five years in jail for taking a woman's life, for shooting several high-powered rounds into her.

And, and that's simply not justice. So I haven't done this with a heavy heart, but it is required because one of the campaign promises that is not being discussed is prioritizing violent crime in the city. And that's what we have to do.

ST: Yeah, I think, of course the controversy is because during the campaign, you said so many times that you would not try children as adults and I think some folks here were wondering why during the campaign, then didn't you say if a child though killed someone, then I will try them as an adult.

JW: Well here's the thing, there are other options, I've had a number of conversations with attorneys for these young men, and the option that was on the table after one of the men turned himself in, was that these individuals would plead guilty, because you know there's camera footage of what they've done and they could have pled guilty to a crime in juvenile court and also pled guilty to a specific amount of time in adult court. And they have rejected that out of hand, and counseling, certainly is not an option.

And let me be clear to those folks like LCCR and FFLIC who are releasing statements of their disappointment. I've spent time talking to young people. And I would encourage them to go revisit young people and have some serious conversations about what is actually happening in the streets.

This is not just random lawless for the sake of lawless, and this money is coming from adults, and to not hold these young people accountable would create the same scenario you saw in the 1990s in Southern California, in which adults were preying, and coercing young people to commit the most serious crimes in a community, telling them, 'you will be out in four years or so and we'll take care of your family, and by the way here's some money that you need right now.'

ST: All right, and based on this case I'm sure people are wondering now, what can we expect from you then. Moving forward if we see juveniles committing heinous crimes like these, do you plan now to put more of them through adult court?

JW: You can expect a couple of things, Sheba. You can expect me to be committed to prioritizing violent crime in the city, you can expect for me to constantly fight to keep young people housed in appropriate juvenile facilities.

And I will put my record up against anyone's in terms of fighting for the rights of young people and delivering juvenile justice overall, and criminal justice reform, against FFLIC, against LCCR, but this is important. This is important for the example that is being set for other young people that are going to be going through a very difficult summer, and when an adult comes to them and says 'look, you'll be out in a couple of years, and we'll pay you some money.'

Right? They need to know that they're being duped by the adults that are pushing them down this life of crime. I'm going to continue to individualize, individually assess every single case that we have, and take them on a case-by-case basis.

But in a situation like this where, where someone was delivering fruit to their elderly parents, and had, and had high-powered ammunition fired at them, and then having these young people pretend to be remorseful, about it when the police stopped them, but only to find out that they actually committed another armed robbery within moments of taking this woman's life, requires very step action in this particular case.

ST: Alright, and when we talk about young people in crime, we're seeing as you kind of mentioned, tons of car break-ins, carjackings. Does this change how you will handle juveniles who are convicted of those crimes?

JW: No, look, those cases still need to be handled in a juvenile setting. However, we will be linking car burglaries that are connected to other, more serious offenses. And we're going to be connecting the adults that are paying for the fruits of these crimes.

The adults that are behind it, we're going to be connecting the dots between them and these young people, and connecting dots between guns stolen in one part of town and used in crimes in other parts of town.

ST: All right, we only have about 30 seconds left, Jason, but I know we spoke a lot during the campaign about you being critical of former DA Leon Cannizzaro for trying kids as adults. Does this case change your perspective at all on your criticism of him?

JW: It doesn't. It doesn't. There was a default of the last administration to transfer every single young person that he could. I've made a commitment to keep all of the cases, other than homicides, in juvenile court so that we can handle them in developmentally appropriate ways.

I'm working with the juvenile court judges on a regular basis to do just that. But if you kill someone in Orleans Parish, three or four years is simply not enough time. I plan on hosting a youth summit with, with, stakeholders and young people, and the school board and everyone we could bring to bear to deal with front-end strategies so that we do not find ourselves in this situation over and over again.

ST: All right, this is a big controversy and everyone's talking about it. So again, Orleans Parish District Attorney Jason Williams, we do appreciate you for coming on and explaining your decision.