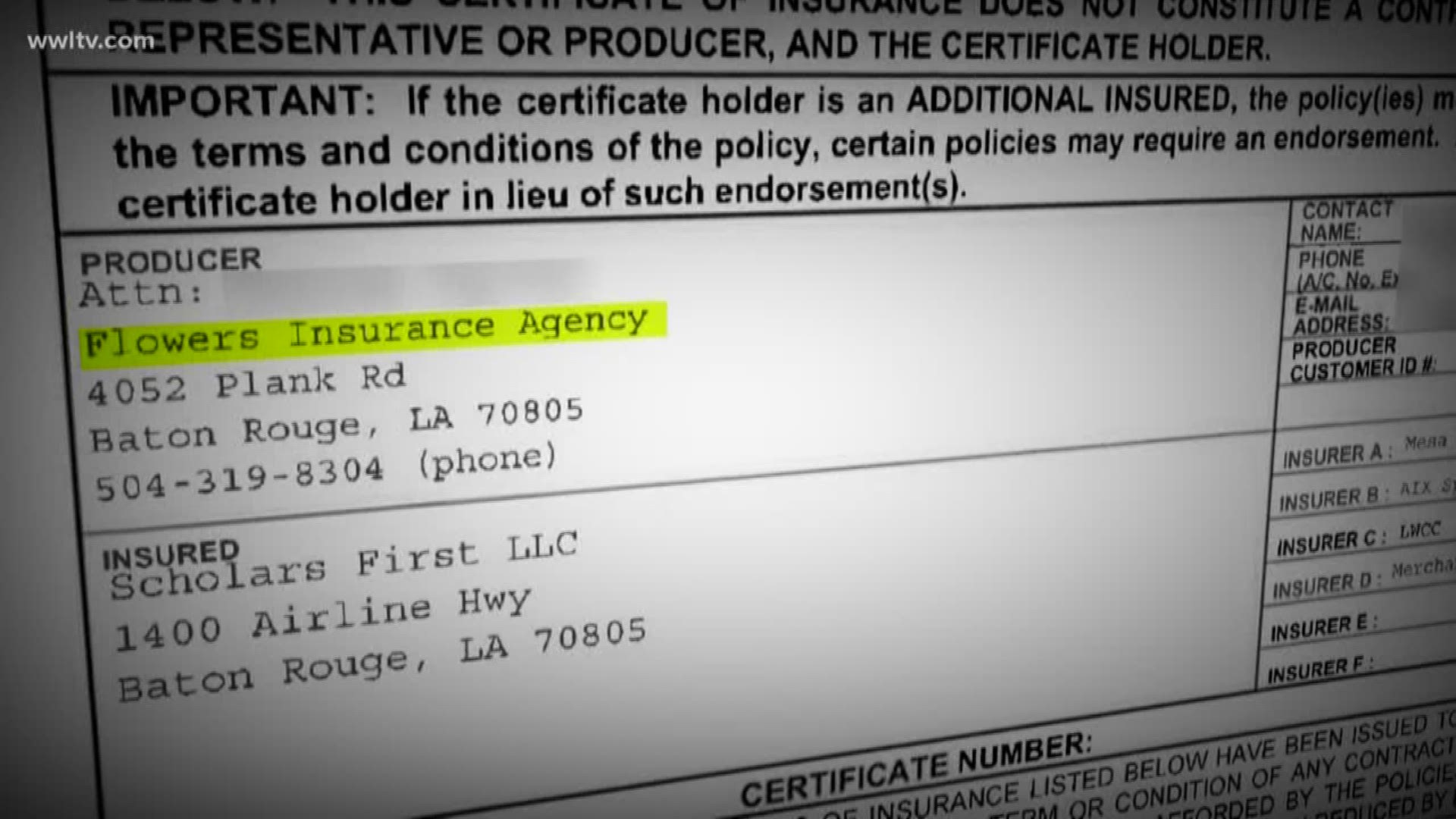 NEW ORLEANS — The Louisiana Department of Insurance has issued an emergency order against a local school bus company that serves nine charter schools in New Orleans, determining that Scholars First issued fraudulent documents to schools as proof of insurance for its buses.

Donelon made the rare move to issue the emergency orders Tuesday, demanding that Scholars First "cease and desist" from issuing fraudulent insurance certificates.

"The recklessness of this action by parties who are charged with the care of children is inexcusable and the Louisiana Department of Insurance stands ready to support our law enforcement partners as this investigation moves forward," Donelon said.

WWL-TV discovered the fraudulent records when it followed up on one motorist’s insurance claim from a February fender-bender with a Scholars First bus. The listed insurer said its policies were expired or associated with other companies, and the listed insurance agent said it hadn't sold any policies to Scholars First in three years.

Donelon said he determined the documents were indeed fraudulent and issued the orders to Scholars First’s owners, Melvin Williams of Gonzales and Jeramy Jackson of New Orleans, and to a part-time Scholars First employee, Trenice Jupiter, whose name was listed on the records.

Scholars First's attorney, Randy McKee, did not immediately respond to requests for comment. Jupiter spoke with WWL-TV last month and said she was not aware that her bosses, Williams and Jackson, were using her name as if she were an insurance agent.

Her name is listed on the certificates as the producer of the insurance and her cell phone is listed as a number for Flowers Insurance Agency in Baton Rouge. Flowers' owner Shannon Johnson said Jupiter is not a licensed agent and never worked for her agency.

Jupiter's printed name is placed on a line for the signature of the "authorized representative" on the certificates, which are supposed to be produced by insurance companies, not the insured. Jupiter's attorney, David Belfield, said that was done without her knowledge and the first time she learned about it was when she got a call from WWL-TV.

There was no immediate word on what the order would mean for the nine charter schools that use Scholars First's buses. WWL-TV found documents using Jupiter's name and listing bogus policies with Mesa Underwriters Specialty Insurance Co. were provided to New Beginnings Schools Foundation, Einstein Charter and Success Prep Academy.

Einstein's CEO has already said he's considering replacing Scholars First as bus provider. An 11-year-old Einstein student was left sleeping on a Scholars First bus and locked inside last week when the bus was parked overnight at a lot in the 7th Ward.

New Beginnings CEO Michelle Blouin-Williams told WWL-TV she was looking into the station's findings but she was suspended Monday as a result of a separate WWL-TV investigation that found she allegedly falsified public records to make it look like her board of directors had approved a contract with Scholars First when it allegedly did not.

Success Prep said it has already received a new insurance certificate from Scholars First indicating a different insurance company and verified the coverage with the insurer.

The state Insurance Department is a part of an Insurance Fraud Task Force with the Attorney General's Office and State Police, and Donelon indicated his fraud unit's findings would be provided for a criminal investigation.

WWL Legal Analyst Chick Foret said falsification of insurance certificates or proof of insurance cards is forgery, a felony punishable by up to five years in prison.