Tried, true and safe way to fry a turkey 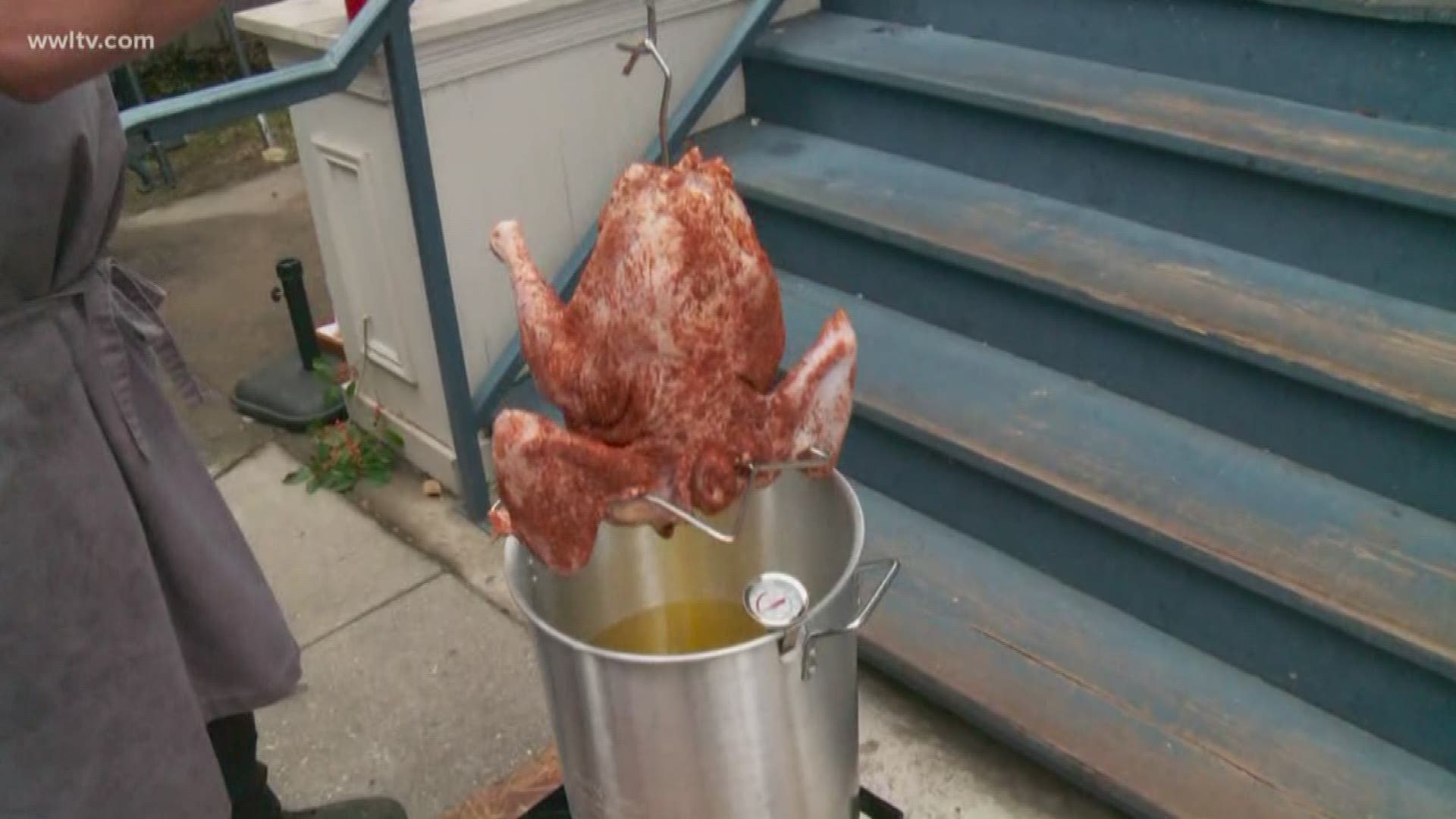 First, place the raw turkey (it can even still be in its wrapper) into your turkey fryer. Then begin adding tapwater to the pot in measured amounts--quarts, half gallons, gallons, whatever. Then when you have the turkey completely covered with water (about 3 inches over the top of the bird is perfect), note how much water it took, remove the turkey, pour out the water, completely dry the pot, and refill the pot with the same premeasured amount of peanut oil. At this point place the pot of oil over your propane burner outside (do not ever deep fry a turkey inside or on a wooden deck unless you want to chance burning your house to the ground!) and heat it to 350 degrees.

While the oil is heating, remove the entrail debris as well as the giblets from inside the turkey and wash it thoroughly inside and out. Then with a handful of paper towels pat the bird dry (remember you want to put as little moisture into the oil as possible to reduce the amount of steam that escapes when the turkey cooks). Next liberally sprinkle the turkey with the poultry seasoning and rub it in briskly with your hands, actually forcing it into the pores of the bird. Now set the turkey aside to allow the seasonings to 'seep' in.

Let's have a conference here! I don't believe in injecting 'stuff' into the turkey to season it. I don't think it's necessary because I don't think it works! Follow me on this--you make a bunch of holes with a hypodermic needle, shoot about 55 gallons of 'stuff' into the turkey, and drop the critter into hot oil. Know what happens next? The hot oil causes the cold turkey to expand, the holes get bigger, the pressure builds inside the turkey, and all the 'stuff' comes squirting out of the holes! So what was that all about??? Why not flavor the oil and let the oil flavor the turkey? Makes sense, doesn't it!. And the best way to flavor the oil is. . .

Begin frying down all the strips of bacon you bought. As the bacon cooks the oil takes on a great, subtle hickory flavor, a flavor that penetrates the turkey during the 50 minutes or so it's frying. A hot turkey in hot flavored oil? Hey, that's seasoning! What's more, you remove the strips from the oil with a pair of tongs as the bacon strips crisp up, drain them on several layers of paper towels, and either snack on them as the turkey fries or set them aside for BLT sandwiches later.

But let's talk technique for a minute. When your oil is right at 350 and you've played with the propane regulator to stabilize it there, get ready to lower the turkey down. This is the most dangerous part of the entire recipe--third degree burns have occurred here. . .houses have burned to the ground here! Either completely truss the turkey with heavy cord and lower him in that way (it's a two-man operation, anyway you look at it!) or place him into a basket or onto a frying trivet and lower him down that way. Either way, be sure you're wearing heavy gloves or barbecue mitts. Once the steam hits your wrists you'll turn the bird loose unless your skin is protected. Can't help it! And that's what causes the problem. So lower him down slowly!

1--You want to fry the turkey 3-5 minutes to the pound at somewhere between 325 and 350 degrees. Keep a watchful eye, though, because smaller turkeys cook faster than larger turkeys (larger turkeys could take the full 5 minutes to the pound to cook). Just in case you need a benchmark, a 15 pound bird will be done to perfection in 1 hour provided the temperature is stabilized and constant.

2--Be just as cautious taking the turkey out of the oil as you were putting it in. Be careful not to lift it then accidentally drop it back into the oil and create a splash! This is how third degree burns are made! A large, extra-heavy meat fork is a perfect aid in turkey deep-frying. And whatever you do keep children far away from the pot the entire time the turkey is cooking, but especially while it is being lowered into and taken out of the oil!

3--When the bird is done (and it's done when the internal temperature reaches 180 degrees), remove it from the oil and set it butt-side down on several layers of highly-absorbent paper towels to let it drain. It's at this stage that you liberally season the hot turkey all over inside and out with the Sprinkling Spice. Done properly at the right temperature, it should turn out anything but greasy.

While lots of folks eat deep-fried turkey cold from the fridge the next day, it's flat unbeatable when it's carved hot from the oil and transformed into N'Awlins-dressed fried turkey poboy sandwiches loaded with crispy lettuce, Creole tomatoes, spicy brown mustard, dill pickles, and a double layer of mynaze!

You can use a sharp serrated knife to do the carving, but to slice into a hot turkey it's best to use an electric knife.

One of the most important things you can remember is never allow the turkey to rest directly on the bottom of the fryer. If you're not going to cook it in a basket, take a steamer trivet (one of those little grate-like things that hold your vegetables off the bottom) and put in down in the hot oil. Unless you do this, the breast portion of the turkey will probably burn.

Oh--and yes, you lower and deep fry a turkey 'breast-down, legs up!' That means the front-end of the bird goes into the fryer first. But I wouldn't suggest you lift the turkey out of the oil by its drumsticks! If they break off and the bird drops back into the oil, you're headed for the Emergency Room!

One last thing! Just so you'll know, Justin intended deep-frying a turkey to be a novelty, not an economically sound method of culinary artistry. First, even on sale, 5 gallons of peanut oil is going to cost you in the neighborhood of $28 to $32 (that's without ever seeing a turkey). Then add the gobbler to that, say, another $20.00 on sale, and you're approaching $50 bucks, a pricey dinner at anybody's standard. So lemme suggest that if you wanna do this, do it as a 'Deep Fried Turkey Party.' You get the turkey and have each couple you invite bring along a gallon of peanut oil as contribution. Now we're into something that's affordable! In fact, now we're 'Naturally N'Awlins cheap!'

The turkey oil can be used two or three times, provided the temperature stabilizes at 350 degrees and you don't let it burn. Of course, it should be stored in the refrigerator between uses.