The Coast Guard says its new containment operations have been successful after taking over the response from Taylor in November.

NEW ORLEANS — The nation’s longest continuous oil spill is being contained successfully for the first time in nearly 15 years, according to the U.S. Coast Guard.

It’s a major development in the vexing Taylor Energy oil leak in the Gulf of Mexico, about 12 miles from the mouth of the Mississippi River. The leak began in September 2004 when Hurricane Ivan toppled a Taylor platform in 450 feet of water, but it went mostly unchecked until this month.

“At this time the system is working and the once predominately large surface sheen has been reduced to barely visible,” said Coast Guard Capt. Kristi Luttrell, the federal coordinator for the Taylor spill response. “We will continue to monitor the containment system’s performance and make necessary adjustments to maximize containment of the spill.”

New Orleans-based Taylor tried in the past to use devices called containment domes – essentially metal boxes to cap and siphon off oil spewing from the sea floor – but they didn’t work. The boxes got gummed up in the oatmeal-like sediments deposited by the mudslide that had knocked over the platform, and a joint task force of Taylor and Coast Guard officials essentially gave up on further containment efforts, fearing they could cause more environmental harm than good.

That all changed last summer when national media focused on the leak again amid talk of expanding oil drilling to the East Coast and Florida, and the Coast Guard federalized the spill response in October. It deployed its own contractor, Belle Chasse-based Couvillion Group, to try a new type of containment dome.

"We did it safely and effectively in six months, and I couldn’t be prouder of the effort everyone’s put in to get this done," Luttrell said.

"This project was extremely unique in its challenges," said Couvillion CEO Timmy Couvillion. "Obviously they've had difficulties with containment in the past. We learned from some of their mistakes and we designed accordingly."

What Couvillion designed was a more box-like structure than those used in the past, 40-by-40 feet on top, but only 3 feet deep. It sits like a box lid, open-side down, hooked onto Taylor Energy's downed platform support structure, and placed about 7 feet above the source of the leak to avoid getting clogged.

Couvillion said it's capturing 99.9 percent of the oil that's leaking, but sometimes, currents have caused some of the oil plume to escape from the small space under the containment device. 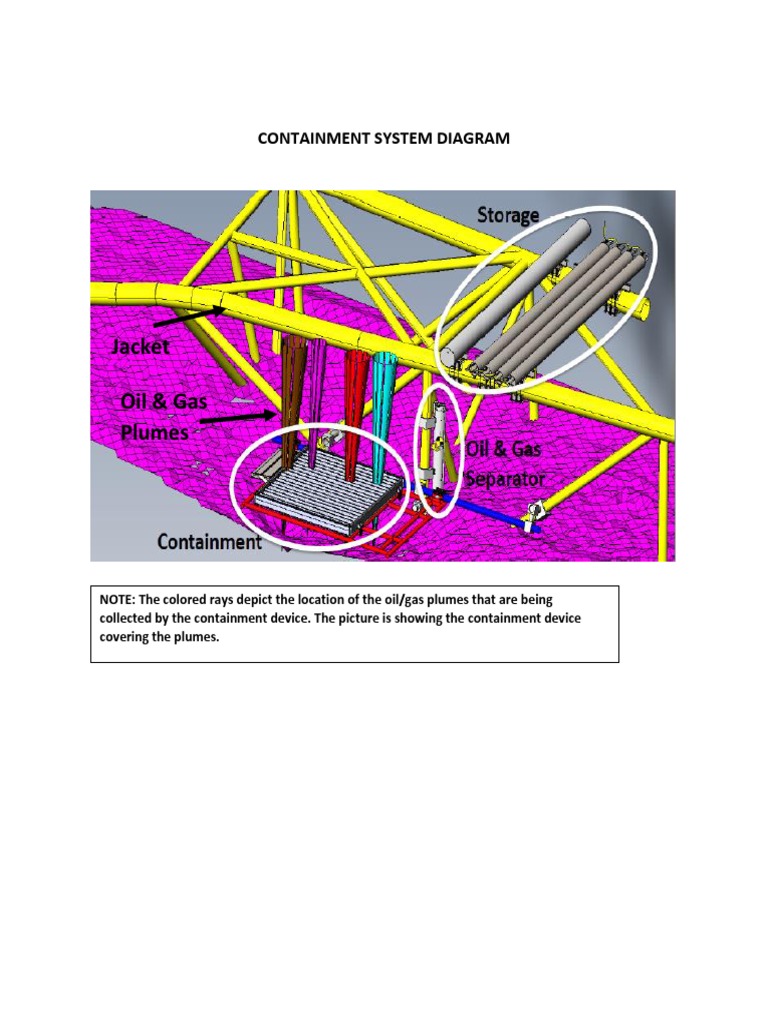 Diagram of Containment System
The diagram from the U.S. Coast Guard is a more detailed one of the containment system. 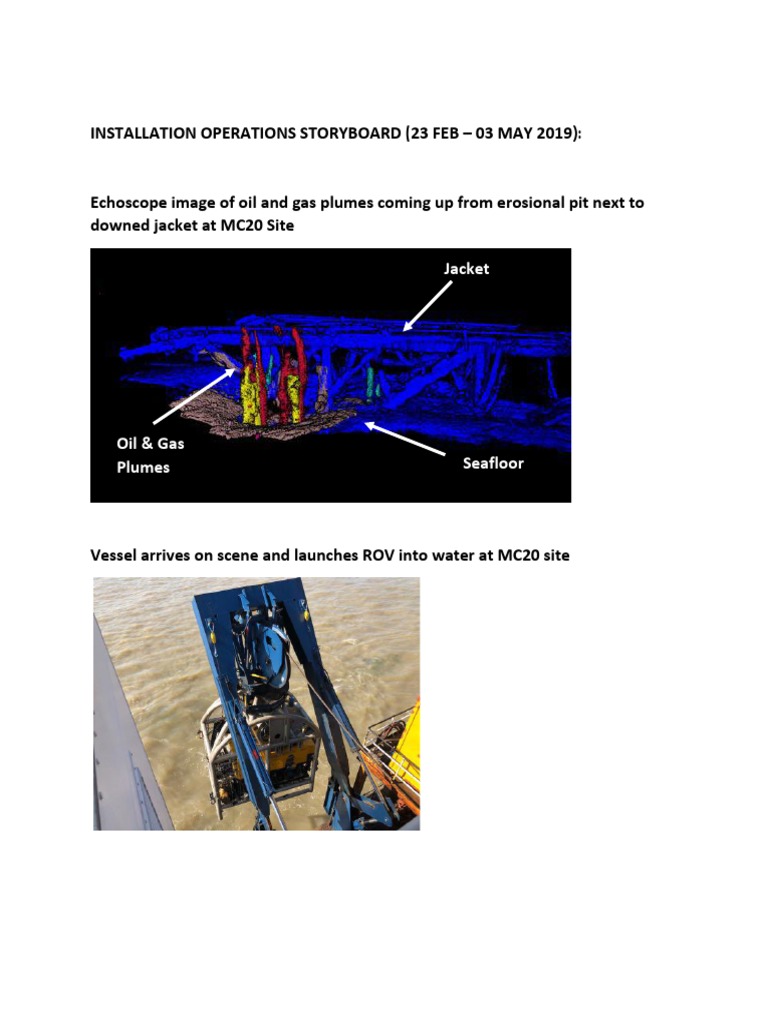 Taylor sued the Coast Guard and Couvillion last December, claiming its due process rights were violated by the Coast Guard and that Couvillion was trespassing on its property by attaching its containment system to Taylor’s platform support structure, which is known as a “jacket.” Taylor President Will Pecue warned that any containment effort would potentially disturb the mud pit burying Taylor’s wells and release more oil into the Gulf.

Over the last month, Taylor reported observing far larger sheen on the surface and blamed the Coast Guard and Couvillion.

But the Coast Guard said the sheen was not larger than before, and the agency filed an update in court this week stating the containment system was “operating as planned” and had collected and recovered “more than 30,000 gallons of oil” by May 14. Luttrell said that was the total gathered over the course of the month, but the collection process was not continuous, so the Coast Guard is not ready to determine exactly how much oil is leaking per day.

Based on observations while oil was being pumped through an oil-gas separator and into collection tubes, Couvillion estimated they were collecting between 1,000 and 1,300 gallons per day.

Luttrell said the oil being collected belongs to the U.S. government, even though Taylor will have to pay for the containment operations.

Taylor reacted with a statement Thursday: “Taylor Energy Company looks forward to receiving the information needed to confirm the Coast Guard's statement, which, if accurate, is encouraging."

Taylor spent nearly half a billion dollars monitoring and trying to fix the leak over the last decade, initially by plugging nine active wells and then by trying various efforts to contain it.

The oil company and government scientists determined that leak was coming not from any open well, but from remnants of oil trapped under a massive mudslide from the hurricane.

The federal government and Taylor jointly agreed that it was safer for the environment to leave it alone and based on Taylor’s observations, determined only 10 gallons of oil were leaking each day, on average.

But the narrative changed drastically last summer when a new scientific study estimated the discharge could have been between 10,000 and 30,000 gallons a day. More conservative estimates placed the spill rate at 4,000 gallons a day, prompting the Coast Guard to take the spill response out of Taylor’s hands in October and hire Couvillion in November to build a new containment system and deploy it, at Taylor’s expense.

Environmental groups, led by New Orleans-based Healthy Gulf, have been monitoring the spill site for years, tracking surface sheen that stretched for miles and questioning the low numbers from the Coast Guard and Taylor.

Healthy Gulf's Dustin Renaud said the Coast Guard shouldn't have been so easily persuaded by Taylor's assessment of its own spill.

In reversing its position in recent months, the Coast Guard not only adopted larger spill-rate estimates, it also decided that one or more wells were actively leaking at the site. Couvillion said it's not clear which of the wells is leaking, but said his crews can only find one distinct spot in the mud pit where oil is bubbling up.

Both Couvillion and Luttrell acknowledged the containment operations are only temporary, and a more permanent solution would be to plug and abandon the wells that are leaking. That's not the Coast Guard's responsibility, but under the U.S. Interior Department, which set up a $666 million trust for Taylor to permanently plug the wells.

But Taylor only spent about a third of that before determining that more drilling to intercept the wells under the seabed and plug them from below was too dangerous. In 2016, the company sued the Interior Department to get that money back, but a federal claims court judge recently ruled against Taylor.

The containment of the sheen on the surface of the Gulf opens the door now to coming up with new ways to use the remaining $430 million in the trust to permanently stop the leak, but that won't be the Coast Guard's task, Luttrell said.