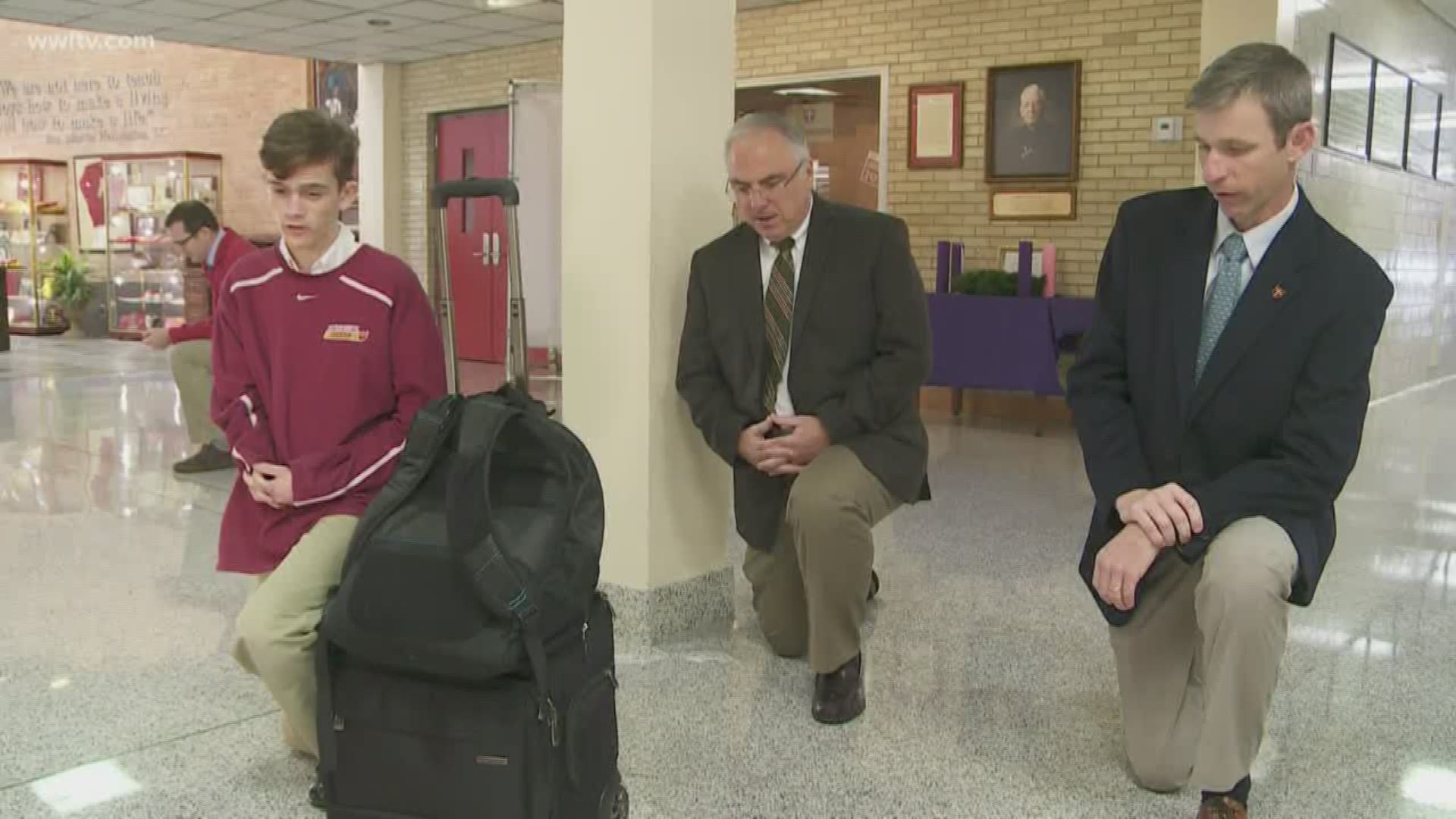 SLIDELL, La. — The Brother Martin High School head football coach is still recovering after being rushed to the hospital for emergency surgery on Tuesday.

According to a Thursday update posted on his family's public Facebook Page, doctors say Mark Bonis suffered a Thoracic aortic aneurysm rupture. The update said doctors removed a ventilator five hours after surgery and he was "talking up a storm" and is aware of what happened.

The family believes the health scare began after Bonis picked up an ice chest last week and heard a pop noise and his back began to hurt.

"He was at school finishing up preparing for the playoff game and on his way home his right leg went numb and he couldn’t feel his foot to push the pedal. He pulled over and his heart rate spiked," the post said. "He managed to get home and complained of severe lower back pain."

The update says family members tried to convince him to go to the emergency room but Bonis insisted that he wanted to sleep it off.

"Then Friday morning came... GAME DAY... he slept all morning long and I knew something wasn’t right," the post said. "but again I thought it was his back pain."

"A few times he mentioned shortness of breath, but he didn’t make a big deal about it and I checked his temperature all weekend long bc I was worried he was having flu like symptoms, but no fever," the post said.

His wife decided to take him to a pediatrician appointment for his son Marc, who was born with Omphalocele, a birth defect. The pediatrician recommended a doctor's clinic which the post describes as "one of the best decisions of my life."

"Mark began to explain his symptoms and they immediately did a full work up on him, chest X-ray, Flu, echo, and what I think saved him was a test they did for shortness of breath," the post said. "The doctor was trying to rule out a blood clot in his lung. So we packed up Baby Marc drove to get the ct scan, and by the time we arrived back at the clinic the radiologist had already read the scan and called the doctor and said to get an ambulance immediately."

Bonis was rushed to Slidell Memorial Hospital where doctors said that "it's way worse than she thought." He almost lost his life at only 40-years-old.

"Within seconds my husband was taken away and I was left there with baby Marc trying to hold back my tears and be strong. As many as 75% of patients with a ruptured AAAs die of sudden cardiovascular collapse before arriving at a hospital and to think my husband coached a football game with one is nothing short of a miracle!" the post said.

WWL-TV spoke to Chief of Cardiovascular Surgery at LSU Health Sciences Center, Dr. William Risher, who did not treat the coach but is a specialist. He says when there are tears in the aorta, which is the main vessel that brings oxygen-rich blood to the entire body, 40% die before they reach help.
If you make it to surgery, 40% of those have major complications.

RELATED: 'Nothing short of a miracle' - Brother Martin coach has lots of support after emergency surgery

It requires emergency, open-heart surgery. And the scary part is there are no symptoms until it starts to tear or rupture.

Wednesday, students at Brother Martin High School held a moment of prayer for the coach.

"We're fortunate. The only thing we can say at this point is God didn't want him yet. He still has some work to do," Athletic Director Mark Wisniewski said.