Colon cancer is out-ranked only by lung cancer and people in Louisiana are even more at risk. 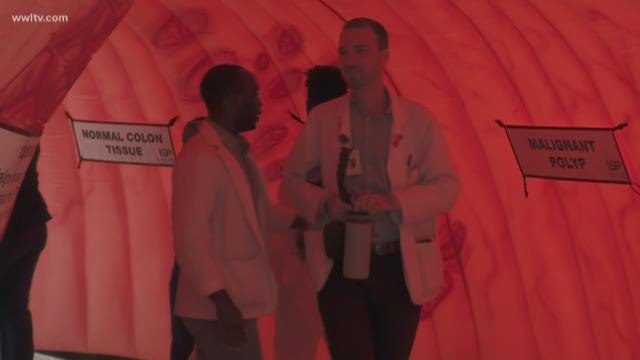 It's the number two cancer killer in the U.S.

Colon cancer is out-ranked only by lung cancer and people in Louisiana are even more at risk. Colon cancer impacts African-Americans and Cajuns in higher numbers, but everyone, both men and women, are at risk.

It may seem odd to take a tour of a giant, inflatable colon replica, but this is serious health business. Filled with illustrations of normal tissue, chronic bowel diseases and colon cancer, the tour in the atrium of University Medical Center comes with a message: regular colonoscopies save lives.

"You need to get your colons checked early, so you can get through stage 1, so it wouldn't get to the critical stage," said Marquel Allen, 34, who just took the tour.

"We have a lot of late stage disease for colorectal cancer in Louisiana. If we found it early through screening, it's more treatable. It's more curable, so it's really good to get screened early," said Colleen Huard, a Colorectal Health Manager who works with The LSUHSC School of Public Health and manages the Colorectal Cancer Roundtable for Louisiana.

Just less than two-thirds of people in the state get regular screenings, putting Louisiana in the top three states of colon cancer incidence and deaths.

One man who took the tour knows first hand what it is like finding colon cancer in a more advanced stage. He had two feet of his colon removed.

"The worst part was taking the chemo. That will kill you," said Harold Burkenstock, 67, who had cancer a few years ago.

A lot of people don't want to get their colonoscopy because of the prep and because they say it's uncomfortable and embarrassing, but as one Channel 4 photographer once said when he was about to go get his colonoscopy, 'I never want to die of embarrassment.'

You can take the yearly at home tests, sending samples in for diagnosis, but colonoscopies do more.

"We're trying to find the polyps so that we know how often to surveil you and what your interval is (between screenings) so we can protect you from developing cancer," explained Dr. Camille Thelin, a New Orleans Gastroenterologist.

"Oh, it's not going to leave my brain, so I'm going to let my family know," said Allen about what he learned Monday on the colon tour.

There is a free walk Saturday morning for colon cancer awareness. It begins at 9 a.m. in Joe Brown Park with registration beginning at 8 a.m.