$100 for every person vaccinated seems expensive. We did the math to find out how much it would cost

To incentivize people to get the vaccine, President Biden proposed cash payouts of $100 to folks who get the shots. But that raises a few questions for Louisiana. 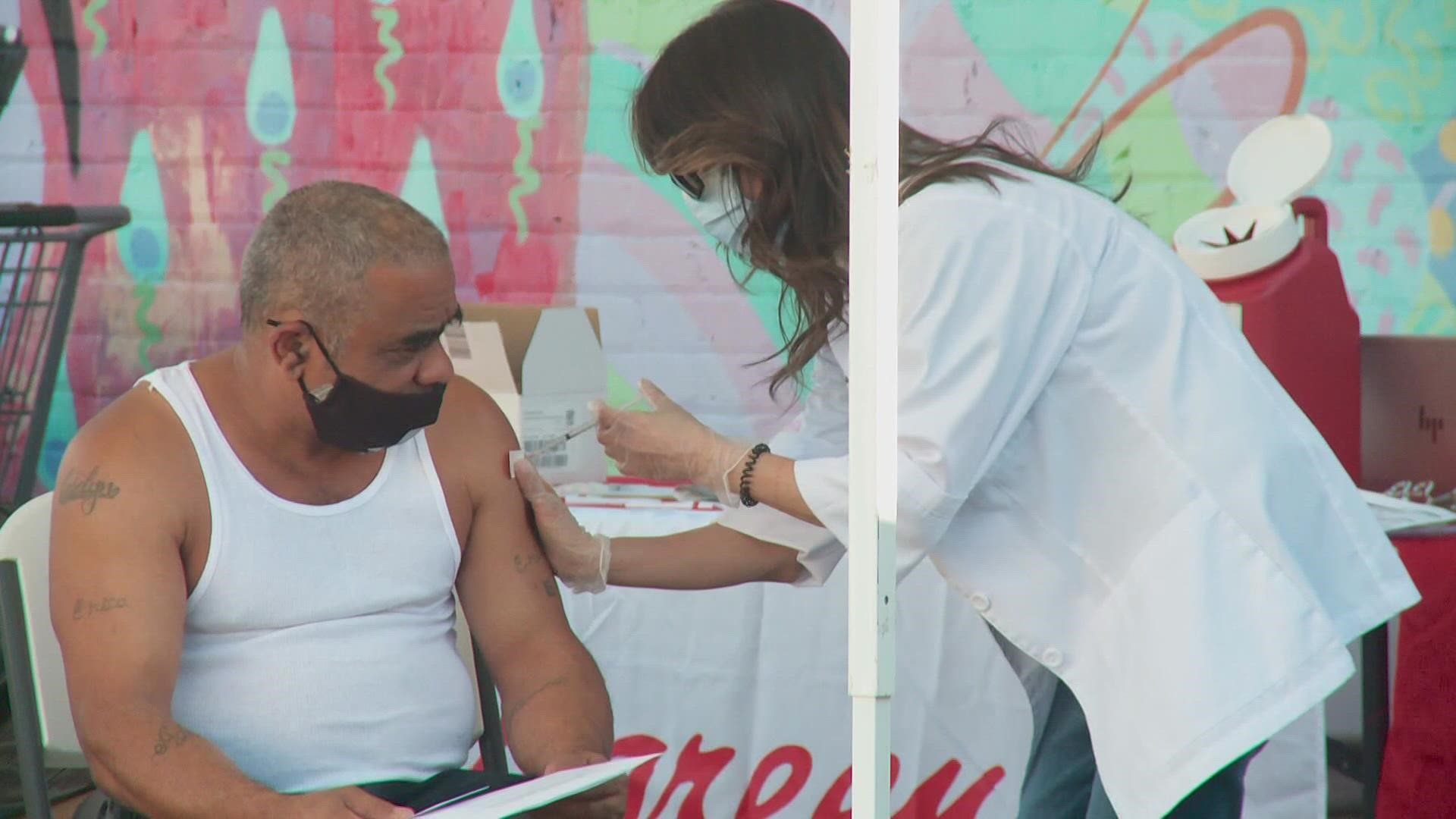 NEW ORLEANS — Louisiana's vaccination rate is one of the lowest in the country. Only 41.5% of the state's population has received their first COVID vaccine dose, and even fewer have completed the two-shot process.

To incentivize people to get the vaccine, President Joe Biden has proposed cash payouts of $100 to people who get the shots. But that raises a few questions for Louisiana.

Would the incentives work? How much would it cost? And who would pay?

We can already answer the first question thanks to a Northshore hospital's vaccine incentive program.

North Oaks Health System in Tangipahoa Parish booked its Saturday vaccine clinic completely after offering $50 for people who get the first shot and another $50 after the second.

Those 500 people are an early indicator that money is one of the strongest incentives, even in a parish like Tangipahoa where only 30% of the population is vaccinated.

Gov. John Bel Edwards hasn't decided one way or another whether the state should start offering cash rewards to get vaccinated, but a spokesperson for the governor's office said Thursday that he was actively considering the idea.

If a statewide cash-for-vaccines program is set up, it would likely cost a LOT of money.

How much exactly? That's a complicated question, but we can figure out a rough estimate using publicly available data.

Let's do the math

About 41.5% of the state's population has received at least one shot so far. For the sake of this exercise, we're going to assume that you won't get $50 for your second shot if you didn't get paid for your first. So anybody who has started getting vaccinated is out. That's a grand total of 1,948,202 people.

The Louisiana Department of Health uses the 2018 estimates from the U.S. Census Bureau to estimate the population for each of the state's nine regions. Adding up those nine gets us a total population of 4,663,616.

From that, we can subtract the number of people who have already started getting vaccinated (1,948,202) to get Louisiana's unvaccinated population, about 2,715,414 people.

But the numbers often cited by health experts across the state fail to account for one important factor: Not everybody is eligible for the vaccine yet.

There's also the number of people who are immunocompromised or otherwise unable to get the shot for a medical reason, but because there are so few people in that category, we're going to leave them out of this rough calculation.

Currently, anybody 12-and-up can get the shot. Pfizer is looking to expand eligibility to children as young as five by September, but that decision still needs to be given the green light by the FDA.

In the meantime, those children under 12 are perpetually stuck in the unvaccinated category and count towards the 58.5% who are unvaccinated with no way to actually change that.

If Louisiana does see a $100 vaccination program, it will likely take some time to implement. By that point, vaccines are likely to be open (or at least close to being available) for anybody 5 and up.

But how much of Louisiana's population is actually younger than 5?

According to 2018 population data used by LDH (we're still waiting on the 2020 census results for a more recent count), 309,339 children are four or younger in the state.

So now we have everything we need to determine how many people in the state could get that $100 (Although we won't get into the potential ramifications of giving a 5-year-old that much money to spend).

If we subtract the 309,339 children who likely won't be eligible even when the FDA lowers the age requirement for the COVID vaccines from the unvaccinated population we calculated earlier (2,715,414), we're left with 2,406,075 unvaccinated people over the age of five who would be eligible for a cash-for-vaccination program.

Biden proposed $100 cash payouts for those who get vaccinated, and North Oaks Health System used the same number, split across two payments to bring people back for the second shot.

Because that seems like the go-to number for how much people should be paid, we'll use that.

So to figure out (roughly) how much an incentive program would pay out if it was designed to pay out $100 to each eligible state resident when they get their second shot, we just multiply the eligible population (2,406,075) by $100.

There's definitely a lot of wiggle room in this number, and that wiggle room is likely one of the aspects that the governor's office is exploring. For example, it doesn't include administrative fees and other costs associated with a program of this scale.

And it's unlikely that 100% of the state's eligible population will get vaccinated even if they're offered $100, or any amount of money.

The politicization of pandemic science, misinformation spread by uninformed or actively harmful actors, and hesitancy about the new vaccine's potential side effects will all likely reduce the number of people who actually get the shot.

But herd immunity is a thing, and it could kick in for Louisiana when we get anywhere from 70% to 90% of the population vaccinated, according to health experts.

That gives us a population of 1,473,352 people. Just over a million people in Louisiana need to be vaccinated to get us to herd immunity among eligible residents.

Multiplying that population needed for herd immunity by $100 gets us a total of $147,335,200 needed to convince enough people to get the vaccine to (hopefully) reach herd immunity.

A program costing hundreds of millions of dollars is incredibly hard to imagine because of the scale of money being proposed. But similar-sized projects can help to understand how much money that actually is.

For comparison, when the Superdome was renovated in 2005 and 2006 after Hurricane Katrina, repairs at the time cost about $193 million — about halfway between the numbers we've calculated here.

Credit: AP
FILE - This combination of Aug. 30, 2005, left, and July 29, 2015 aerial photos shows downtown New Orleans and the Superdome flooded by Hurricane Katrina, left, and the same area a decade later. When the New Orleans Saints host rival Atlanta on Monday night, it'll mark the 10-year anniversary of the stadium's reopening, and a victory over the Falcons that symbolized a city's determination to rebuild from one of the worst natural disasters in American history. (AP Photo/David J. Phillip, left, and Gerald Herbert, File)

While this is an incredibly rough estimate, it does give us an idea of how much a program like this would cost. Which brings up the next question: Who pays?

It probably won't be the federal government, according to Biden.

In his Thursday speech calling for cash incentive programs, the president asked state and local governments to use funding from the American Rescue Plan, passed in March, to pay people.

Louisiana has offered some incentives already in the form of a lottery only open to vaccinated people.

Louisiana residents who have received at least one dose of the COVID-19 vaccine have been able to sign up at shotatamillion.com for a chance to win a $100,000 cash prize every week in July, with a grand prize of $1 million on the line at the end of the month.

More than 720,000 Louisianans have signed up for the lottery already, and registration stops on July 31 ahead of the final drawing in early August.

That leaves room for another incentive program such as direct cash payments if the governor so chooses. It would be another carrot to the looming stick: A return to stricter restrictions across the state if COVID cases continue to spike as they have been for the past several weeks.

It's unclear how much appetite for the program there is in Baton Rouge, where Edwards, a Democrat, must wrestle with the GOP-led Legislature over legislation and balancing a budget each year.

There's also potential pushback from people who have already been vaccinated and wouldn't receive the cash payouts; those people may already feel they're being punished for doing the right thing because of recent mask advisories for vaccinated people because of the highly contagious delta variant.

Biden referenced this possible dissatisfaction while pleading with Americans to get the shot, and urged people to focus on the common good and the quickest path for the country to move past the pandemic.

"I know that paying people that get vaccinated might sound unfair to folks who have gotten vaccinated already, But here's the deal — if incentives help us beat this virus, I believe we should use them," said Biden. "We all benefit if we can get more people vaccinated.”