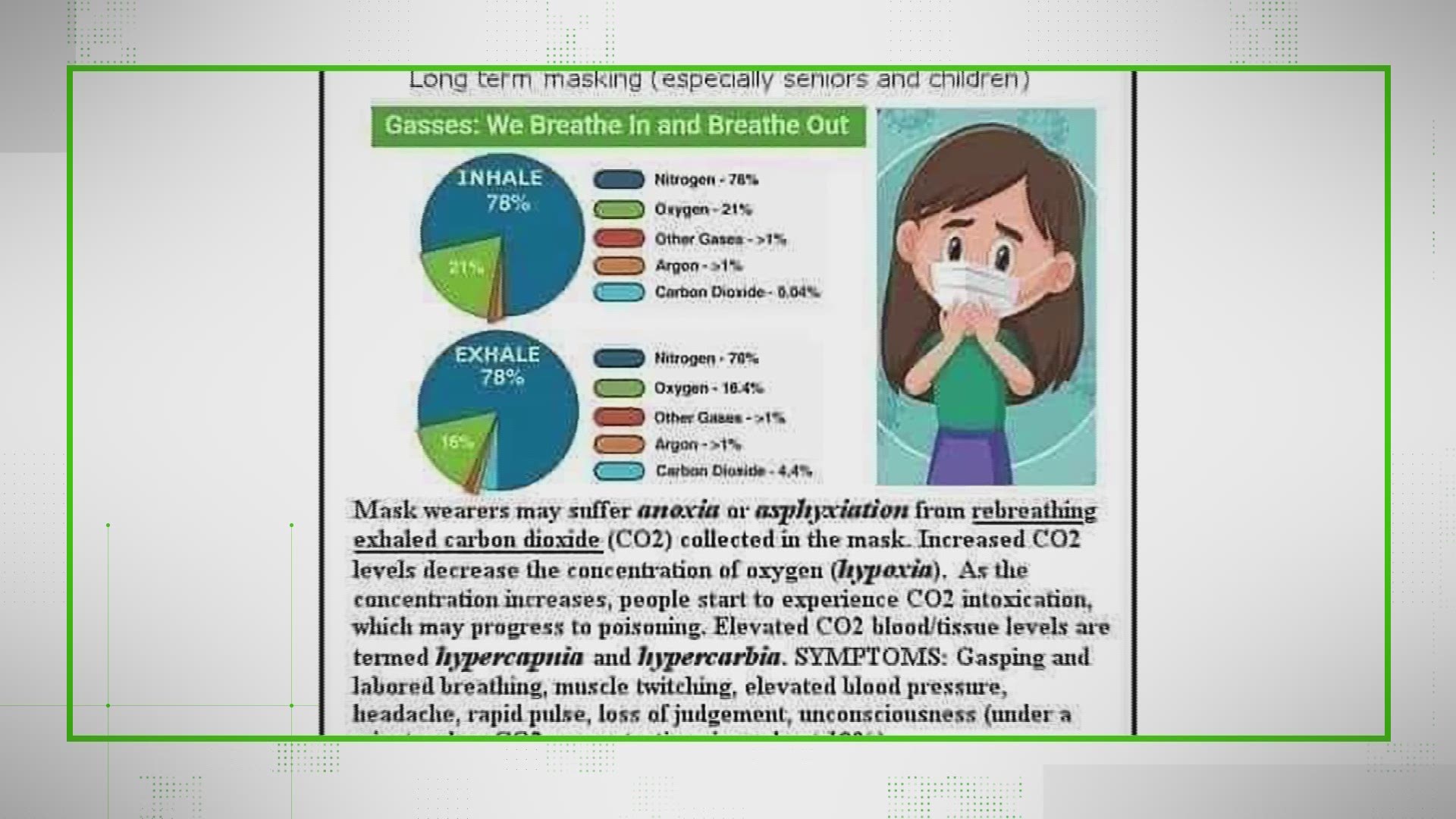 A viral image titled: “Masks and Carbon Dioxide Toxicity,” appeared on multiple social media platforms. It says masks could trap exhaled carbon dioxide and cause us to breathe it back in. It claims this process could lead to CO2 intoxication or poisoning which, in turn, can cause breathing problems, muscle twitches, loss of judgment and more.

It's being used as justification for not wearing masks right now. But is it true?

Are facemasks causing people to suffer CO2 toxicity by forcing them to breathe in CO2 that they've exhaled?

Carbon dioxide can be dangerous at high levels, but experts don’t believe facemasks put you at risk.

Carbon dioxide is a naturally occurring gas in every breath we put out. But, high concentrations of the gas can cause physical health effects.

Documents from the U.S. Department of Agriculture detail how different levels of carbon dioxide affect us. Less than 0.5% concentration will likely have no effects whatsoever. But as the concentrations rise, symptoms including drowsiness, increased heart rate, confusion and even unconsciousness can occur.

It’s important to note that those documents don’t address wearing masks. They talk about the possible effects if workers are exposed to CO2 from workplace hazards.

“The most common exposure to CO2 for Food Safety and Inspection Service employees (FSIS) results from the off-gassing of CO2 gas from the use of dry ice for chilling and packing product,” it reads.

So at higher than normal concentrations, carbon dioxide can cause physical effects. The key question is whether it’s actually building to those dangerous levels in masks.

The Centers for Disease Control and Prevention says it’s unlikely in medical masks and even less likely in homemade masks. They said carbon dioxide can build up over time in masks, but not to a dangerous level. At worst, you may get a headache, but not carbon dioxide poisoning.

That’s based on research about medical quality equipment like N95 masks. N95 masks have a tighter seal and allow less air in and out.

Homemade masks, especially cloth ones, aren’t great at stopping air from going in or out, period. And that’s not their purpose. The CDC says their use is to catch droplets that could spread the virus.

Here is the full text of the statement from the CDC:

"In regard to N95 respirators, studies done by Roberge et al. (2010) indicated that hypoventilation did not pose a significant risk to healthcare workers over the course of less than one hour of continuous N95 use. When healthcare personnel are working longer hours without a break while continuously wearing an N95 filtering facepiece respirator (FRR), CO2 may accumulate in the breathing space inside of the respirator and continuously increase past the 1-hour mark, which could have a significant physiological effect on the wearer (Lim et al., 2006), including headache, altered cognitive judgement, and increased breathing frequency, among other symptoms.

To fix the problem of breathing too much CO2 that has built up within the respirator facepiece, a worker can simply remove the respirator. Some facilities practice oxygen supplementation during these breaks from respirator use, but there really is no need for this as the oxygen in the environment is more than enough to relieve most of the symptoms listed above.

Specific to the viral image, it is unlikely that wearing a mask will cause “anoxia,” “asphyxiation,” “hypercapnia,” or “hypercarbia.” While CO2 will slowly build up in the mask over time, any symptoms experienced with low levels of CO2 are resolved upon removal of the mask and breathing room air for a minute."

While high concentrations of carbon dioxide can affect your health, we can VERIFY the claims that masks are causing carbon dioxide poisoning or toxicity are false.

Keep in mind, you shouldn’t be wearing these for long periods anyways.
The CDC only recommends masks when you’re out in public and when you can’t social distance.

RELATED: VERIFY: Viral image about masks gets the numbers wrong, but the idea right.

RELATED: VERIFY: Why vitamin D is beneficial to some, but not a COVID-19 'cure'