Edwards says Louisiana is no longer on track to run out of ventilators this week and is clear for the next two weeks. 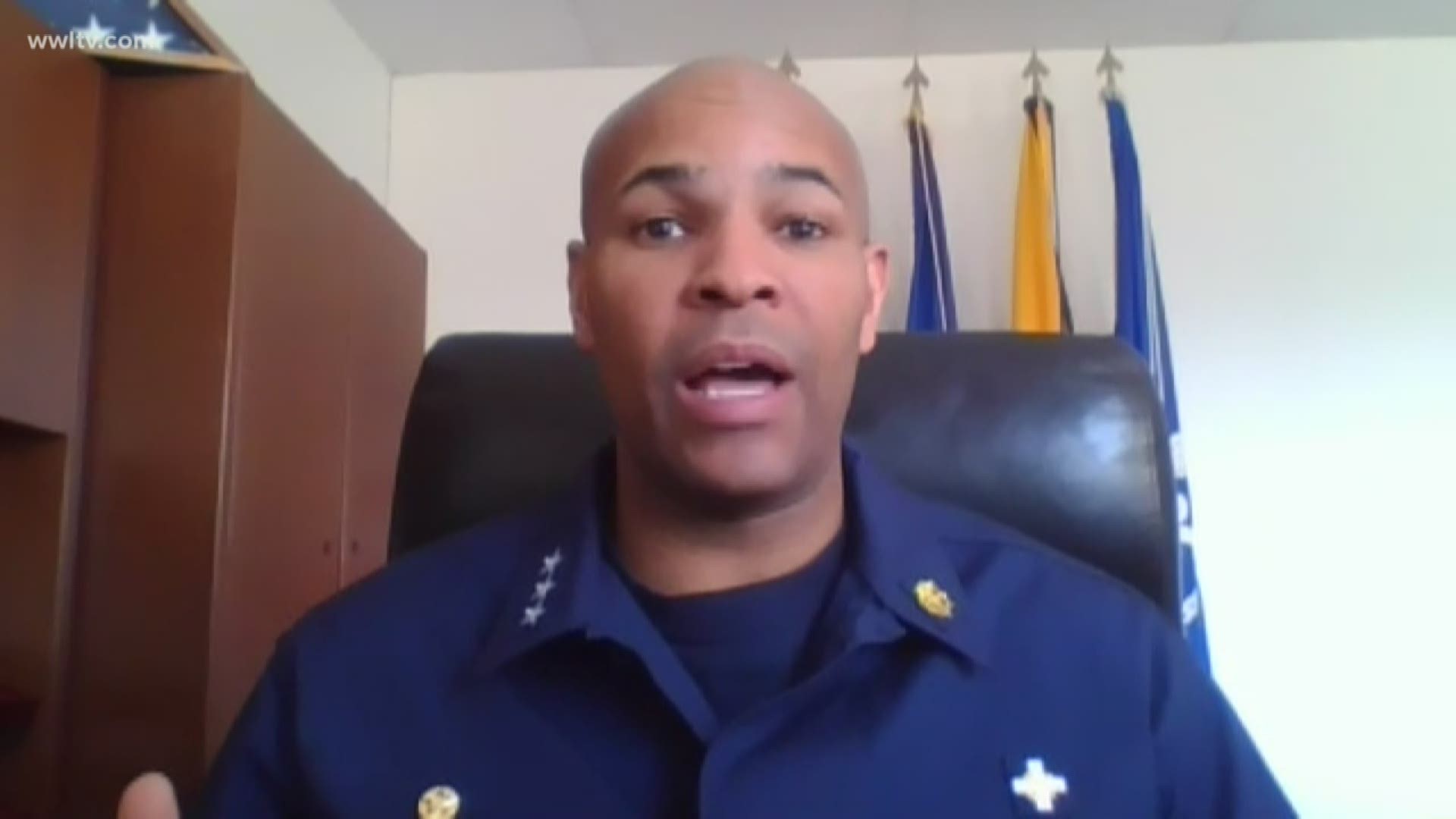 For the first time after a month of increasing COVID-19 cases in Louisiana, the number of people in the hospital for the disease has gone down, according to the latest data from the Louisiana Department of Health.

According to the LDH, there are now 1,983 people being treated in hospitals for the virus, down 13 patients from yesterday. It's also the second day in a row that the number of ventilators in use has decreased, with another 29 opening up for patients in critical condition.

This comes as 70 new deaths were reported by the LDH, tying yesterday's single-day high and bringing the statewide total to 652.

It's not clear exactly how much the large number of deaths impacted the improved numbers versus how many patients are getting better. COVID-19 recovery numbers are still unavailable for Louisiana.

It's also important to note that hospitalizations saw a record low on Monday and then a near-record high followed on Tuesday, indicating a lag in reporting.

Regardless, Gov. Edwards said yesterday during his daily press briefing that Louisiana is no longer on course to run out of ventilators this week and is now clear for at least the next two weeks.

While New Orleans and Jefferson Parish, the epicenter in the state, suffered a combined 29 new COVID-19 deaths, they only added 298 new cases, the lowest addition since the start of the pandemic.

Lafourche Parish, however, experienced a tripling in deaths, from four reported yesterday to 11 today, and a doubling in total cases, from 158 to 355.

The people most vulnerable during the coronavirus pandemic got an amazing surprise Wednesday morning when they found entertainment mogul Tyler Perry had paid for their groceries.

Winn-Dixie customers shopping during the store's designated  senior hour were reportedly shocked when they went to check out and were given a note that their purchases had been completed covered by Perry, the New Orleans-born writer, actor, producer and comedian behind the "Madea" series.

Louisiana Governor John Bel Edwards is asking you to keep the state’s fishermen in mind the next time you go to the grocery store or order takeout from a restaurant.

While many local businesses are struggling to stay open during the coronavirus outbreak, Louisiana’s fishing industry is still reeling from a tough year after the Bonnet Carré Spillway was opened multiple times.

Last week, the U.S. Army Corps of Engineers reopened the flood structure for an unprecedented third straight year. Col. Stephen Murphy says that if there aren’t any more big rains in the Mississippi River’s vast watershed, the spillway will be open for about 30 days.

Four members of a New Orleans family who died within a few days of each other in late March had tested positive for Coronavirus, according to Jason Melancon, Director of Public Information at the New Orleans Coroner's Office.

This includes the matriarch of the Franklin family, 86-year-old Antoniette Franklin, a lifetime New Orleanian who died March 23.

There was a huge outpouring of sadness on social media regarding the death of the Franklin family, friends describing the family as generous and kind.

More popular than ever, City Park's cash reserves are running out

Whether it’s a workout or a bike ride, City Park in New Orleans plays a bigger role these days for folks trying to keep some normalcy in a stay-at-home world. However, this new normal is creating some not so normal problems for the park itself.

These 1,300 acres are a much-needed break for families, making daily bike rides part of the routine.

To Bob Becker, the man in charge of keeping the park operating, that’s no walk in the park these days.

“In some ways, we’re kind of marking time, you know, trying to keep the park up,” said Becker.

As CEO, Becker says 90 percent of the park’s revenue is self-generated, through attractions like the amusement park, miniature golf, and sporting events.

All of that is closed now, and about 40 weddings had to be postponed. Other money comes from a state tax on gaming machines at the Fairgrounds. That’s closed too.

“We’ve basically lost all of our revenue,” said Becker.

'It’s not over until it’s over': Lafourche Parish man released from ICU after surviving battle with COVID-19

Greg Johnson says it took just four days for him to go from chills, fever and a cough to an ICU bed, fighting for his life, after contracting COVID-19.

“I felt as though, for the first few days I didn’t think I was going to make it, to be honest,” Johnson told WWL-TV.

“It was very, very bad for three or four days, you know, not knowing if you were going to make it, can’t breathe, can’t move and can’t do the things that you normally could do,” Johnson said. “Once they took an x-ray, it was like 'we have to bring this guy up to the ICU because the lungs are almost blocked.'”

Johnson admits it has been a long, rough journey.

He spent more than a week at Ochsner St. Anne Hospital in Raceland receiving oxygen and battling the virus. Johnson said he was blessed and impressed with the level of care he received.

“That team of doctors and nurses was amazing,” Johnson said. “Without them, I don’t think I could survive it, because I was more than just a patient to them.”

He has now been cleared to go back his real estate investment job.

Daniel "Danny" Becnel Jr., one of south Louisiana’s most prominent trial lawyers who represented plaintiffs in class action lawsuits that made national headlines, died Tuesday after a long illness. He was 75.

Becnel, who was well-known in the River Parishes, was reported as being seriously ill in late 2015, soon after waging an unsuccessful campaign for St. John the Baptist Parish President. For many years, Becnel battled leukemia. Several years ago he also underwent surgery to donate a kidney to his brother Robert, also a lawyer.

A 2010 Bloomberg profile said Becnel has "represented in some of the highest-profile class actions in American history, from fen-phen diet pills and Big Tobacco to Dow Corning breast implants," as well as Toyota sudden-acceleration cases.

A Northshore doctor is warning that COVID-19 could cost lives even among those who don't contract the virus; the statewide stop on non-emergency surgeries could have deadly consequences.

"I have a patient that was supposed to get a mastectomy for breast cancer this month and it’s been put off two months. I don’t know about you, but if I had cancer, I would not want that put off two months," said Dr. Chad Domangue of Cypress Point Pain Management in St. Tammany Parish.

"We do about 700 elective cases a month," he said about his hospital. "Spine, heart disease, kidney disease, lung disease, you name it. You also have surgery centers and cardiologists that do outpatient procedures as well. You’re talking about 200,000 that have been on hold."

And the waiting is fraying some people's nerves.

"I think this is the most stressed that I’ve ever been," said patient Amy Cuneo, 36.

Dozens of the city’s homeless were moved Tuesday from a Central Business District Hotel to another hotel in New Orleans East.

That move -- the second such in as many weeks -- comes as social workers try to get them the help they need to kick substance-abuse problems, to sign up for healthcare and to look for jobs and permanent housing.

Nearly 200 people were offered temporary housing on March 26 after the city cleared out the large homeless encampment at Canal Street and Claiborne Avenue, as well as one in Duncan Plaza across from City Hall.

The city and state made the call to clear out the encampment after some people who lived there tested positive for COVID-19.

Clancy: It's up to you to check on your loved ones in nursing homes

Nursing homes have been an epicenter of COVID-19 cases nationwide, not just here in Louisiana.

The governor’s office says this decision was made by epidemiologists in the state Health Department, and it tracks the CDC’s recommendations. Other states are following this policy as well.

The bottom line is this: If you have a loved one in a nursing home, you’ll have to call the home to find out if your loved one is at risk.

"We started talking about how can we help get the PPEs we need," said Dr. Karen Bruggers, Head of Prosthodontics at LSU Health New Orleans School of Dentistry.

"You have to think -- well, we can't just order these. What do we have available to us that we can use to put something together to get through this challenging time," Laughlin said.

They're using 3d printers to create reusable N95 masks from a flexible plastic that can be cleaned. They're pairing that up with an N99 filter that can be replaced.