The president and first lady delivered remarks Thursday afternoon at the National Day of Prayer service from the White House Rose Garden. 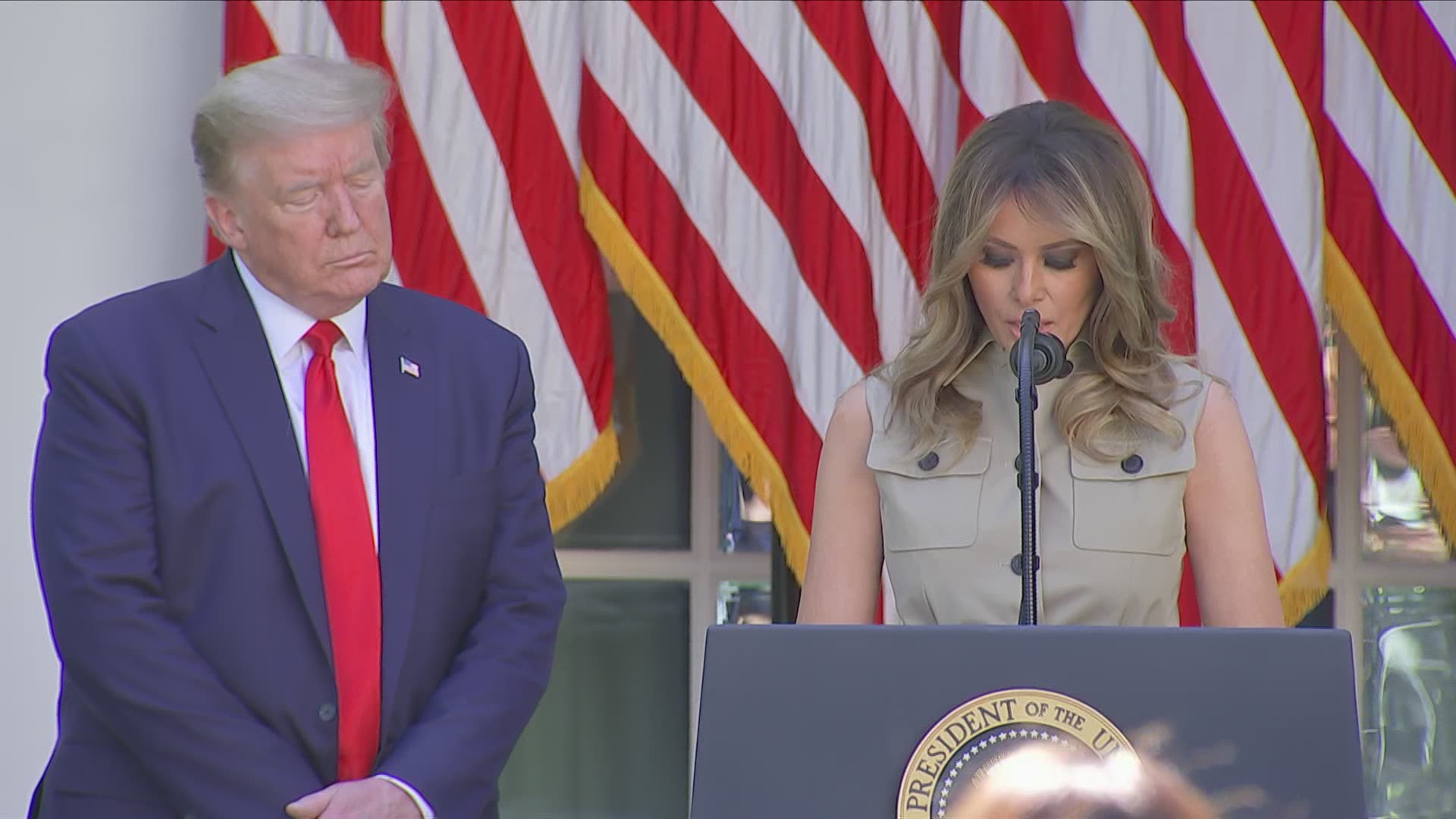 Trump also has praised another Republican governor for rolling back state coronavirus restrictions despite failing to meet the administration's recommended benchmarks, as he welcomed Texas Gov. Greg Abbott to the White House on Thursday.

“Texas is opening up and a lot of places are opening up. And we want to do it, and I'm not sure that we even have a choice," Trump told reporters. "I think we have to do it. You know, this country can't stay closed and locked down for years.”

Abbott’s visit comes as he faces mounting pressure back home to reboot the Texas economy at a faster pace, even as cases in his state are on the upswing. Restaurants and retailers in the state have already been allowed to resume limited service and hair salons and barber shops will be allowed to reopen Friday.

Just hours before appearing with Trump, Abbott removed jail as a punishment for flouting virus safeguards still in place in Texas amid an outcry over a Dallas salon owner who was jailed for keeping her business open in defiance of Abbott’s restrictions.

Texas is among a long list of states that have been gradually allowing business to reopen despite failing to reach the guidelines spelled out by the White House last month. Those guidelines recommend that states wait until they have seen a two-week decline in documented cases before beginning phased reopenings.

Texas has had more than 34,000 confirmed cases of COVID-19 and more than 940 deaths. And cases have been creeping up. The state has averaged 1,043 new cases a day in the seven days since stay-at-home orders expired May 1, up from an average of 846 new cases daily during the seven days prior. That's a 23% increase.

But Abbott on Thursday insisted the state was containing the spread and had created “surge forces” to deal with virus flareups, with a focus on jails, meatpacking plants and senior homes, where the virus has proven particularly deadly.

“It’s like putting out a fire,” he said, echoing language used by Trump.

Trump has taken a hands-off approach to the reopening process, insisting that decisions be left to the states.

“The governors have great power as to that given by us,” he said. The president has not spelled out what authority he is referring to.

During a visit to deliver protective gear to a nursing home in Alexandria, Virginia, Vice President Mike Pence brushed off states' disregard for the federal guidance, saying he was “very confident that governors are moving in a responsible way.”

“It appears to me that states are taking a phased approach," he told reporters. "They’re following the data, they’re following the science and they are implementing the kind of testing and resource assessment that is contemplated in the president’s guidelines to open up America again.”

Governors across the country have been struggling with the competing priorities of averting deaths that could be prevented, while trying to mitigate near-unprecedented economic suffering. Trump in recent days has been trying to persuade Americans to accept the human cost of returning to normalcy as he tries to quickly reverse the economic meltdown ahead of the November election.

“We’re looking forward to getting on with it,” Trump said Thursday, later adding, “We’re all warriors together."

Later, in the Rose Garden, the president and first lady Melania Trump expressed their sympathies for those who have lost loved ones before faith leaders from different religious affiliations offered prayers from a separate lectern.

“In recent days and weeks, our country has endured a grave hardship. We pray for every family stricken with grief and devastated with a tragic loss,” as well as the doctors, nurses and first responders “waging war against the invisible enemy,” Trump said.

"As our Nation heals, our spirit has never been stronger," he had tweeted prior.

The first lady also shared a video message to commemorate the National Day of Prayer, and said that "all through history Americans have unified in challenging moments and in our greatest times of need we always turn to prayer."

Earlier Thursday, the White House confirmed that a member of the military serving as one of the president's valets tested positive for the coronavirus. The White House says Trump and Vice President Mike Pence have since tested negative for COVID-19 and “remain in good health.”

It's the first known instance where a person who has come in close proximity to the president has tested positive since several people present at his private Florida club were diagnosed with COVID-19 in early March.