Cryotherapy is for more than just NFL athletes, but does it work? 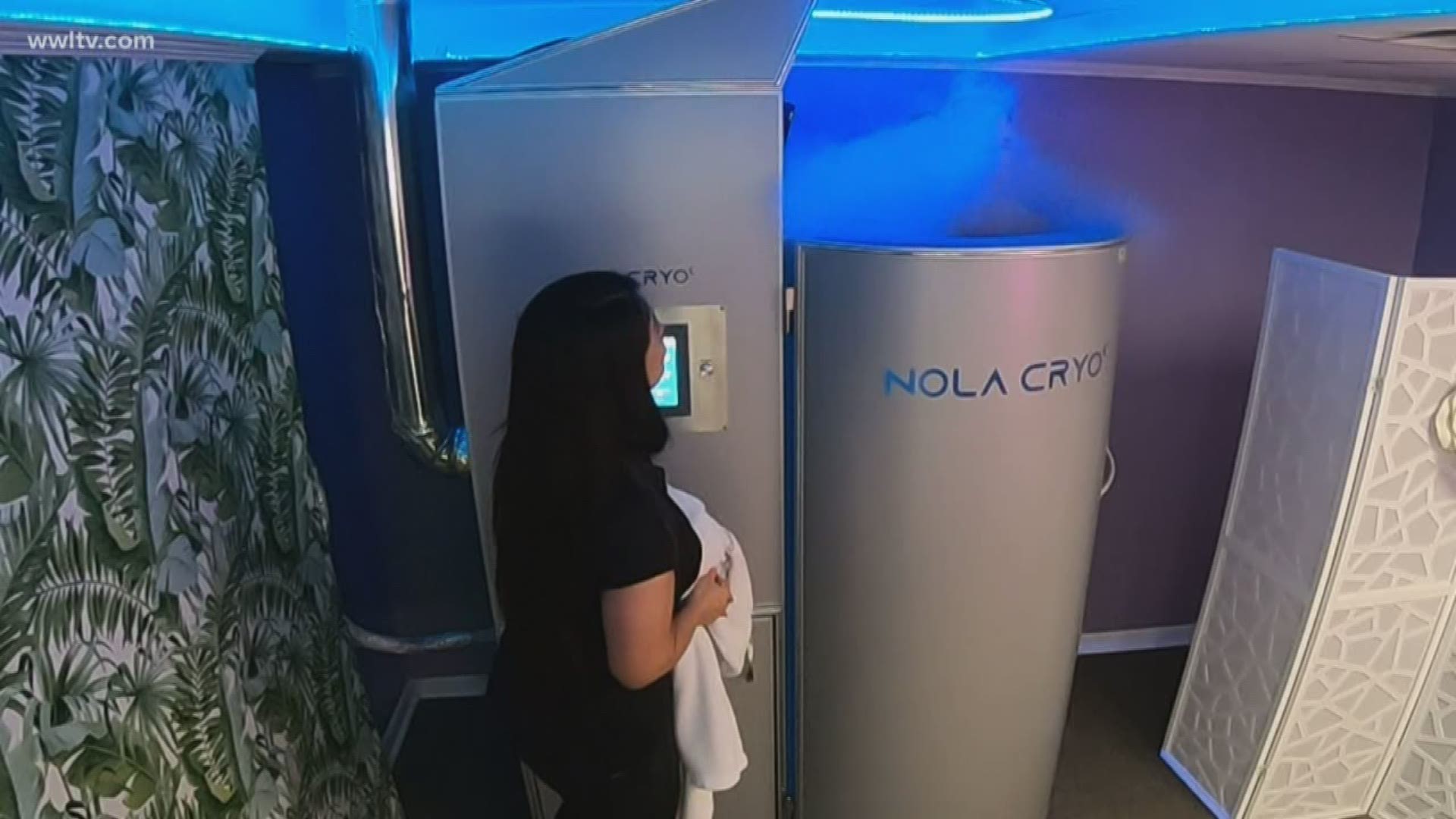 NEW ORLEANS — The Saints and other NFL players do it. A professional wrestler does it. A body builder does it, and so do elite U.S. Army Rangers. And now so, can everyday people.

It's called cryotherapy. And now, whole-body cryotherapy, once just used by pro athletes, is gaining popularity.

Dr. Drew Morvant has knee, shoulder and back pain. He says it's from the years of leaning over patients while practicing dentistry. So, when the first south shore public business with a cryotherapy chamber opened a month ago in Metairie, he was in.

"When you're in the chamber, you feel a little cold, but you don't feel any pain,” Dr. Morvant said. “And when you leave, even arthritic pain you may have in your fingers, it's gone. But you also feel very energized. You're thirsty and you feel energized. It seems like the energy lasts for six hours.”

Milena Perkins felt the same thing when she tried a cryotherapy chamber while away on vacation.

"When I got in the chamber, I noticed that where my back was hurting, I didn't feel it at all after I got out. Immediate,” said Perkins, who owns NOLA Cryo. “My energy level was through the roof as soon as I walked out of the chamber and then I just felt great all day.”

She liked it so much, she took a risk as a single parent of identical twin, teen girls. She put aside her work as a real estate agent and opened NOLA Cryo in Metairie. There's spa and recovery treatments, like infrared sauna and NormaTec cuffs for the legs, but it's the cryo chamber attracting all ages.

"Right now we're getting a lot of athletes and then we're getting housewives. I've got real estate agents that are coming in," Perkins said.

Liquid nitrogen is used to make the chamber cold. It's anywhere from -200 to start, working up to -350 degrees. You only wear boots, gloves, and for men, underwear. Your session lasts just three minutes. You must be completely dry with no sweat. And there is a long list of reasons you can't use cryotherapy, many include lung, heart, diabetes and cardiovascular conditions.

WildKat Sports professional wrestler Luke Hawx depends on his body for a living. His daily two-hour workouts are part of the job, so is being body slammed.

"What we do is very hazardous. It's very real. It's very hard hitting. It's very strenuous on the body. When I was having bad back pains, I noticed that my recovery time was really shortened. I attribute that to cryotherapy," Hawx said.

Luke always wanted to use cryotherapy chambers because top athletes do. Online, the Saints give a public tour of their training facility, complete with a cryo room, and the Director of Sports Medicine, Beau Lowery, at the Ochsner Sports Performance Center, explaining the benefits.

"Everybody's known the benefit of cold therapy, right? The cryo chamber actually, sort of helps speed that up, especially for players who don't like spending 15 minutes in a cold tank, so that way in two or three minutes they can get the same benefit," said Beau Loweryon for the Saints.

Fitness expert Mackie Shilstone is just back from Fort Benning, Ga. He volunteered to train a team of elite Special Forces for the Annual U.S. Army Best Ranger Competition. It's a grueling fight for survival. Many teams even drop out.

"We went through 60 hours, literally no rest, in the best ranger competition. My two guys are the oldest ever to do it and we made a top five finish," Shilstone said.

His team used cryo therapy for recovery, so they could be resilient and come back and compete at peak performance day after day.

"It helped them do one thing, drive inflammation out of the body," explained Shilstone. "Because inflammation causes swelling and the swelling can stay with you for a period of time."

LSU Health Sciences Center exercise physiologist Dr. Melinda Sothern combed through the cryotherapy studies for us. The data found it reduced pain after rigorous exercise. There is emerging evidence suggesting that whole body cryotherapy may reduce pain and improve physical function for people with osteoarthritis. Two-thirds of people with knee pain said they had significant improvement, so did elderly men with back pain.

But one thing we found interesting was this claim:

"I just noticed a general a feeling of well-being and my metabolism is up. Seems like I'm losing weight and I'm not even trying to lose weight," Dr. Morvant said.

Dr. Sothern is also a weight loss expert and says currently there is no direct scientific link to weight loss, but cryotherapy is raising your metabolism. And there is an intriguing chemical change related to making fat more metabolically active brown fat. And she says when inflammation is lowered, your insulin use is improved, causing less fat storage around the belly. Or it may just be in the way you feel.

"It may be promoting physical wellbeing and then that person, because they feel better, because their pain is lower, and their recovery is quicker, they may be exercising more." Dr. Sothern said.

And feeling better is why personal trainer, corporate wellness director and former body builder, Jared Daigre has been working for two years to open "Euphoria." His complete wellness business will open in Metairie this summer and feature the cryotherapy chamber where your complete body including your head is inside.

This is why Jackie Pottinger decided to try it for the first time.

"About three years ago I was in an auto accident and a lot of my running and daily routines were taken away. This is far less painful than having an ice pack on," Pottinger said.

"The bottom line is that if you're otherwise healthy and can afford it, then it's not going to be detrimental. Make sure that you're supervised, that you're doing this with somebody who understands the system, and is there to make sure you do it right,” Dr. Stewart said.

And would Mackie Shilstone use it?

"If I was going to be doing a triathlon, let's say a full Iron Man Triathlon, you bet your sweet shoes I would!" he said.