"This is a worldwide problem. It's a huge problem. In fact, in the United States, peripheral arterial disease is more common than heart disease, which is our leading killer. It is rare for a person to have a severely diseased leg attached to a completely healthy person." 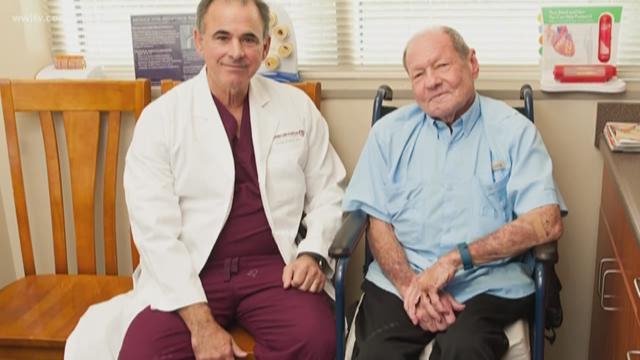 HOUMA, La. -- It's one of the greatest health problems in the U.S. that you've probably never heard of.

And it's the reason one man was told he needed both of his legs amputated.

He gave up hope, but then he heard about a doctor in South Louisiana who changed his emotional journey.

Every time you swipe a credit card, get cash from a 24-hour ATM, have a medical claim filed electronically, or even search WebMD for health answers, you can, in part, thank Fred Goad of Nashville. He has been involved as a CEO or investor or co-creator in all of those, but for all of his success, connections, and means, there was something Fred desperately wanted that he, or top doctors from around the country, couldn't provide.

"I was really trying very hard to save my legs," Goad said.

Fred did not know he had PAD, Peripheral Artery Disease.

Just like in heart disease, the arteries become clogged with plaque. In PAD, clogs can be in the leg arteries starving the muscles, skin and tissue from oxygen rich blood. Then one day, he went to a podiatrist to remove a small piece of glass from his toe that he pick up on the beach.

"And he said, 'You know what, there's no hair growing on your legs, on your lower legs.' And he said, 'That's generally a circulation problem,'" Goad remembers.

As time passed, the toe wound would not heal, going from black to Gangrene. It was dying from lack of blood flow. He began going to the best doctors, at the best institutions around the country, for tests and medical procedures to open up the clogged arteries.

"Nashville, where I'm from, we do $72 billion a year in health care. We're one of the health care capitals of the world and I couldn't get fixed in Nashville, Tennessee."

He was also prescribed 40, hour-long hyperbaric oxygen chamber treatments, and boots to wear, three hours a day, to pump the blood down his legs. He tried a vibration plate machine, and acupuncture, but it got worse. A top vascular doctor at a renown hospital gave him the bad news.

"'You should have this amputation within 60 days.' And he said, 'And your right leg, think about doing that below the knee next year, in at least the first half of the year,'" Goad recalled the disheartening conversation.

The man, who at 75, did an hour on the elliptical machine every day, now made physical therapy appointments, prosthetic appointments, and went to talk to other amputees about how to live life as a double amputee.

"They were telling me, 'You're going to fall a lot’ and things. So we got with a renovator to renovate our home to have non-skid floors put in, to change the showers where you can walk in, have bars, seats in the shower," he said.

Then Fred got a phone call from a friend, who heard from another friend about his double amputation. And that call, changed his life.

"He said, 'He's done this before and I hear he's very good at it,'" the friend told him about a doctor in Houma, Louisiana.

Fred was told to go see Dr. Craig Walker at the Cardiovascular Institute of the South in Houma. He called the clinic and left a message.

"This is a worldwide problem. It's a huge problem. In fact, in the United States, peripheral arterial disease is more common than heart disease, which is our leading killer. It is rare for a person to have a severely diseased leg attached to a completely healthy person," said Dr. Craig Walker, who is a specialist in interventional cardiology, internal medicine and cardiology.

He is the Founder and Medical Director of Cardiovascular Institute of the South and the Chairman and Founder of the New Cardiovascular Horizons Annual Conference and holds clinical professorships at LSUHSC and Tulane.

"People that treat you like you're substantial, he treats every patient the same way,” Goad said, as he choked up again with tears. “He returned the call."

Dr. Walker treats patients from around the world with PAD. The goal: amputation as a last resort, and to teach other doctors the same. Doctors from all over came in to New Orleans to hear him lecture at the New Cardiovascular Horizons Conference. Amputees are at a higher risk to go into nursing homes at a six figure cost, lose their health and even their lives.

"The science of our field has improved dramatically, but the practice of medicine has not yet caught up," Dr. Walker said.

Dr. Walker sat Fred and his wife down after the exam and said this with confidence.

"'I've looked at all these studies and I think there are four opportunities for me to get blood flow through your legs.' And he sat down and drew it out with us," Goad remembered.

Finally it was surgery day. Fred's wife got the news of what happened in the O.R. before Fred came out of anesthesia.

"When I came out of the recovery room, as I opened my eyes, my wife was beside me and she was crying, and I thought, 'Well it didn't work,” but through her tears, she gave him a thumbs up Goad said.

While Fred's PAD was from family history, Dr. Walker says Louisiana has a high rate of PAD because of the high number of smokers, diabetics, and people getting older. He has started efforts in schools to teach about heart healthful diets and not smoking. He also pushes the importance of early diagnosis of PAD.

Fred is healthy and well. On the day of our interview he was using a walker, but only because of a knee replacement infection. He believes divine intervention got him to Dr. Walker.

A third of people who get amputations, go straight to a nursing home and never leave, costing more than $100,000 a year, just for the facility.

Dr. Walker believes teaching prevention methods of a healthful diet, and not smoking as early as elementary school.