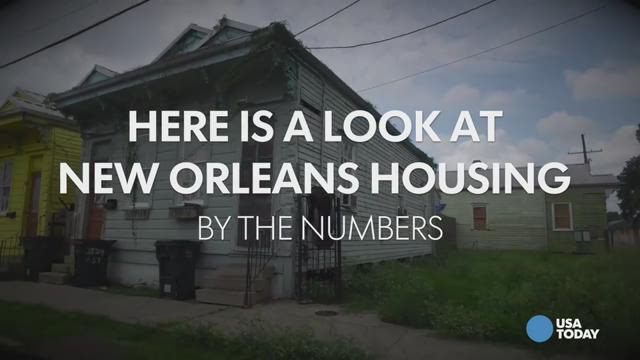 NEW ORLEANS – There’s no mystery about how the mosquitoes got into Shawanda Holmes’ former home. They flew through a gaping hole in the wall.

One of the wooden boards on the side of the house is partly missing, covered only by a loose, blue plastic tarp that flows down the outside wall and crumples in a heap on the grass. Rainwater pools in its folds, providing an ideal site for mosquitoes to breed. Trash fills the backyard.

Holmes' home had no air conditioning, and she was afraid to plug in a fan, for fear that water had leaked into the electrical outlet. Mosquitoes repeatedly bit her children, ages 4, 6 and 14.

“The mosquitoes were tearing us up, no matter what I did," said Holmes, 32, who lives in New Orleans' Center City neighborhood.

If Zika spreads in the United States, Americans who live in substandard housing and neglected neighborhoods could face the greatest danger, particularly along the Gulf Coast – where steamy summers, high poverty rates and a dizzying array of mosquitoes could allow the virus to take hold, said Peter Hotez, dean of the National School of Tropical Medicine at Houston’s Baylor College of Medicine.

About 45 million Americans live in poverty, including 8 million along the Gulf Coast.

The less money people have, the less they can afford basic protections, and the more likely they are to live in neighborhoods with inadequate trash collection or illegal dumping, Hotez said. Roadside trash can contribute to Zika outbreaks by collecting rainwater and providing a breeding ground for mosquitoes.

"Having low-quality housing means you don't have air conditioning, you don't have window screens, and the mosquitoes can easily fly into the home," Hotez said.

And while middle-class families "take insect repellent for granted," said Georges Benjamin, executive director of the American Public Health Association, "it's a luxury for some people."

People without access to health care, particularly contraception, are also at higher risk, said Corey Hebert, a New Orleans pediatrician and emergency medicine physician. Although Zika spreads mainly through the bite of infected mosquitoes, men can also spread it to their sexual partners.

Zika poses the greatest threat to pregnant women and their unborn children, who can develop catastrophic brain damage if infected in the womb.

Hebert said he worries about pregnant women living in crowded public housing projects. While anyone can be bitten by mosquitoes, “where there is more crowding and less air conditioning, there is more risk,” said Thomas Frieden, director of the Centers for Disease Control and Prevention.

Hundreds of mosquitoes in one home

Carent Davis and Nicholas Coker began complaining to their landlord about the mosquitoes in their New Orleans apartment last November. Their landlord, who charged $675 a month for the two-bedroom unit in the New Orleans East neighborhood, didn't take their concerns seriously.

By May, Davis, 30, was eight months pregnant and the apartment was infested with hundreds of mosquitoes. "It was unbearable," Davis said.

The couple was terrified the mosquitoes might infect their unborn son.

"I was worried every day about him getting the Zika virus,” Davis said. "My only thought was not even for myself, but for my son.”

Mosquitoes “attacked us every day,” said Coker, 32, who said he often woke up in the middle of the night, swatting in the dark at unseen attackers. "I can’t bring up my baby in this house.”

Yet leaving an unhealthy home isn't as easy as many imagine, said Hannah Adams, an attorney with Southeast Louisiana Legal Services, which represents tenants in substandard housing. Many of her clients, who live paycheck to paycheck, don't have the money for a new security deposit.

Davis and Coker didn't have a lot of options for housing, They each earned just above minimum wage at Taco Bell, in addition to the money that Davis brought in from a second job as a waitress.

While affordable housing is in short supply in many cities, the problem is particularly acute in New Orleans, which is still recovering from the devastation of 2005's Hurricane Katrina. Rents in New Orleans soared 20% to 25% from 2009 to 2015, according to a June report commissioned by the New Orleans Redevelopment Authority. Wages have barely changed in that time.

And many of those rental units are in poor condition. Up to 78% of the 159,100 rental units in New Orleans needed major repairs in 2011, according to the latest in-depth report from the U.S. Census, called the American Housing Survey. More than 5,300 units leaked water from the outside; 1,600 had holes in the floor; 2,350 had no working bathroom.

Adams interceded on Coker's and Davis' behalf, and the couple's landlord agreed to put them up in a motel while their apartment was fumigated. While staying at the motel, Davis went into labor. Their son, Nich’oli, was born June 4 – about two weeks early, but in perfect health. Instead of returning to the apartment, which is still filled with mosquitoes, they moved in with Coker's uncle.

The couple hope to move soon into a place that rents for $650 a month, with no security deposit. They never learned how the mosquitoes got into their old apartment. The apartment's screens appeared intact, leading them to guess that the insects were breeding in the walls.

“I feel 100% better now that we’re out of that situation,” Coker said. “It’s real comforting to be able to sleep at night.”

The link between housing and health

“Only 10% to 20% of our health is related to medical care that doctors provide in an office or a hospital,” Woolf said. “The rest is related to education, income, the places we live, our homes and neighborhoods.”

While people live an average of 55 years in the neighborhood around the old Iberville housing project in New Orleans, those in middle-class Lakeview live to be 80, Woolf said. That’s the largest disparity in life expectancy of the more than 20 metropolitan areas he’s studied.

Overall, 28% of New Orleans residents live in poverty, along with 44% of children, according to the Data Center, which analyzes population trends in Louisiana. Those rates are about double the national average, according to the U.S. Census Bureau.

Yet Berry's neighborhood could put her at risk. She lives in New Orleans’ Lower Ninth Ward, which suffered greater devastation during Hurricane Katrina than anywhere else in the city.

"People who are unlawfully dumping discarded tires and other waste are disproportionately doing it in poor neighborhoods," Hotez said.

“When we talk about housing, we’re not just talking about cosmetic issues,” said Cashauna Hill, executive director of the Greater New Orleans Fair Housing Action Center. “We’re talking about real-life issues that can have serious and negative health impacts.”

Shawanda Holmes's two youngest children have high levels of lead in their blood, a common problem in older homes with peeling lead paint. Her 4-year-old son also suffers from asthma. Her 14-year-old went to the emergency room after falling into a hole in the floor.

Holmes had hoped to move into government subsidized housing, but knew it could be a long wait. She was number 23,296 on the local housing authority’s waiting list.

More than 5,000 units of public housing have been demolished in the 11 years since Katrina. Only 13% of those units have been rebuilt, according to the Greater New Orleans Fair Housing Action Center.

With so many people searching for affordable housing, landlords have their pick of tenants; some feel no pressure to make repairs, Adams said.

When Holmes withheld her rent payment to pressure her landlord to fix the hole in her floor, she was evicted. Holmes and her children moved in with her mother, who lives a few doors down, in a shotgun home owned by the same landlord.

1 / 8
A tire filled with water sits on an empty lot in the Lower Ninth Ward. Tires and other trash scattered in the area lead to a breeding ground for mosquitoes causing the area to be at a high risk for a Zika outbreak. Kelly Jordan, USA TODAY

Before this story was published, Holmes received some good news. A nonprofit called Unity of Greater New Orleans, which helps people at risk of homelessness, has offered to pay Holmes' rent and security deposit for the next year. She's now planning to move into a house across the street.

Few people in substandard housing are that lucky.

“I worry a lot about the tenants I work with,” Adams said. “They’re really stuck. They’re stuck in unsafe and unhealthy and, very often, unsanitary living conditions.”