What are the symptoms of the Wuhan coronavirus?

After a second confirmed case in the United States, here's what to look for, according to the CDC. 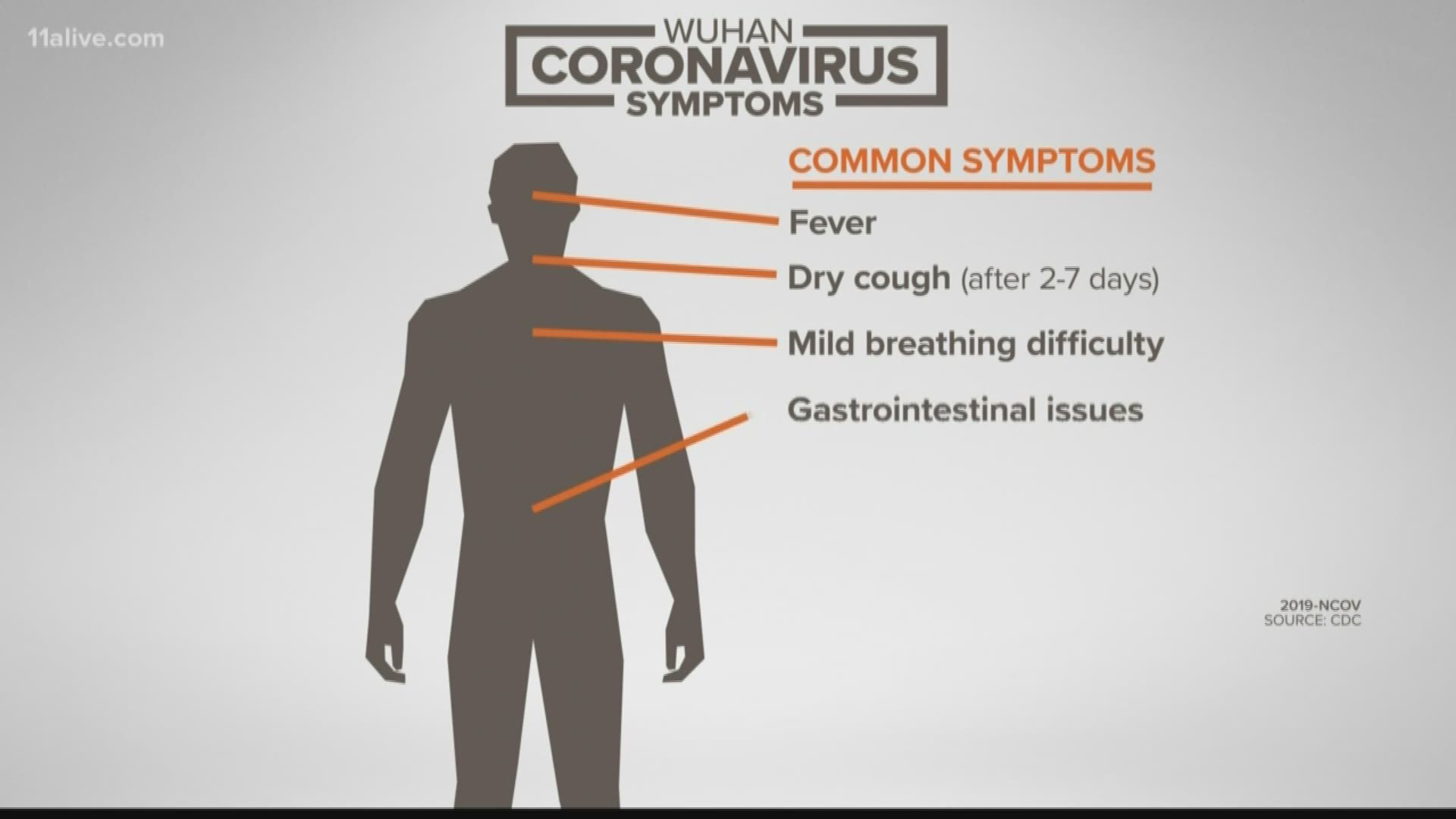 ATLANTA — The Wuhan coronavirus outbreak has been classified by the World Health Organization as 2019-nCoV or the Novel coronavirus. According to the Centers for Disease Control and Prevention, the first known cases were first identified in Wuhan City, China in early December, 2019.

The CDC says that common human coronaviruses usually cause mild to moderate respiratory infections, not unlike the common cold. They say that most people become infected with these types of viruses at some point in their lives.

Common coronaviruses usually only last for a short period of time and have symptoms that include a runny nose, headache, cough, sore throat, fever and a general feeling of being "unwell."

However, according to the CDC, patients who have had confirmed cases of the 2019 Novel coronavirus have reportedly suffered mild-to-severe respiratory illness with symptoms that include:

As of Thursday afternoon, according to the CDC, officials believe that symptoms may appear anywhere from as few as two days to as long as 14 days after exposure.

Many of the initial patients in the Wuhan Novel coronavirus outbreak have had some link to a large seafood and live animal market, according to the CDC, which suggests an initial spread of the virus from animal-to-human. However, a growing number of patients with confirmed cases have not had exposure to animal markets, which indicates that a spread of the virus from person-to-person is taking place.

CDC experts have said that it is not yet clear how easily the virus spreads from person to person, and it is important that scientists learn this in order to better understand the risk involved with the virus.

As of this point, the virus has not been found to be spreading in the United States.

The CDC has issued a Level 3 Travel Notice Warning, recommending that travelers avoid all nonessential travel to Wuhan, China as a result of the outbreak.

In response to the outbreak, Chinese officials have closed transport within and out of Wuhan, including buses, subways, trains and the city's international airport.

"In coordination with the CDC, CBP has measures already in place to identify travelers with overt signs of illness at ports of entry who may be potentially infected with a communicable disease and to minimize the risk to the traveling public. This enhanced screening will be for symptoms specifically related to the 2019-nCoV and will be conducted by CDC personnel upon arrival," a Customs and Border Patrol spokesperson said on Friday. "Based on current information, the CDC has determined that the novel coronavirus presents a low risk to the American public; however, they are taking proactive preparedness precautions."

The CDC says they will continue to closely monitor the situation in China and the other countries where confirmed cases have been reported, and is working directly with the World Health Organization.

As of Friday, Jan. 24, confirmed cases have been reported in China, Japan, South Korea, Vietnam, Thailand, Taiwan, Singapore, and the United States.

The CDC does recommend regular actions to prevent the general spread of respiratory viruses including:

According to the CDC, those suffering from MERS-CoV have had severe respiratory illness with symptoms of fever, cough, shortness of breath -- with some exhibiting diarrhea and nausea/vomiting. For many with MERS, more severe complications have followed, including pneumonia and kidney failure.

About three to four out of every 10 people reported with MERS have died.

The symptoms of MERS start to appear about five-to-six days following exposure but can range anywhere from two to 14 days.

The CDC said that those suffering from SARS-CoV suffered high fever, headache, an overall feeling of discomfort and body aches. Some people have also suffered mild respiratory symptoms at the onset. About 10-to-20 percent of patients suffer from diarrhea. After two-to-seven days, SARS patients may develop a dry cough and most develop pneumonia.

During the 2003 SARS outbreak, nearly 8,100 people became infected with the virus worldwide, and of those, 774 died. The CDC says no known cases of SARS have been reported anywhere in the world since 2004.

Screenings to be conducted at Atlanta airport for coronavirus, CDC says