“This instrument is flawed. I think it is a gimmick and it needs to be revised,” the Metropolitan Crime Commission president said. 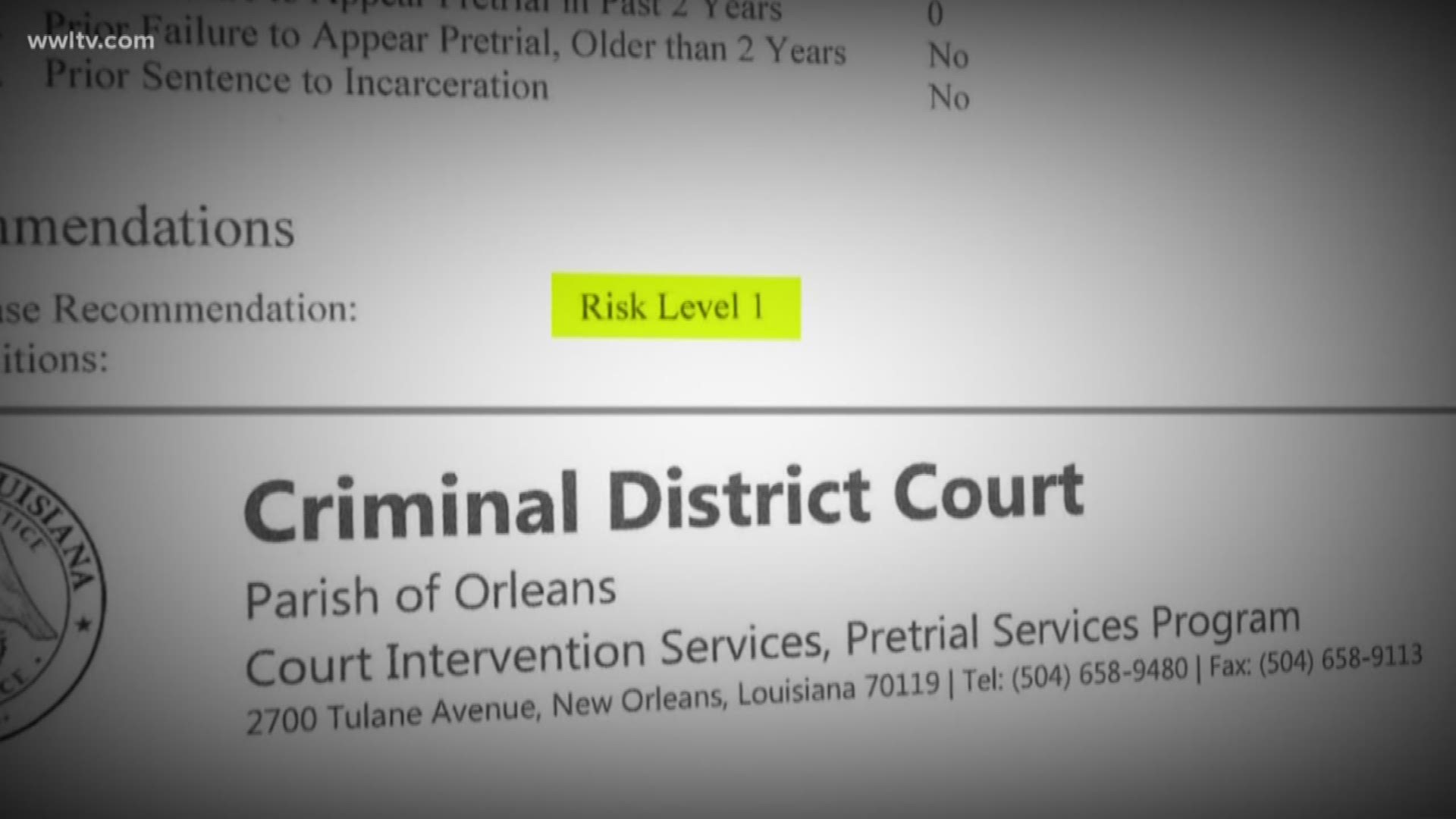 NEW ORLEANS — About one-third of suspects booked with violent felony crimes in New Orleans are deemed low-risk to re-offend or miss court in a risk assessment survey used by the court to determine bail, but those assessments are often ignored by the magistrates setting bail, according to a report issued Monday by a watchdog group.

The report by the Metropolitan Crime Commission studied nine months of bail settings and found that 38 percent of rape suspects and 29 percent of murder suspects were given risk scores of 1 on a 1-to-5 scale, recommending them for an unsupervised release while awaiting trial.

“This is called a public safety assessment tool, but it is more about trying to drive down the pre-trial jail population than it is taking into consideration the risk that the offender poses to the community,” said MCC President Rafael Goyeneche.

The report was prompted by the recent case in which two armed robbers held up the CVS Pharmacy on Prytania Street, tying up two employees, then engaging in a shootout with police in which one officer was wounded in the shoulder. The suspects also were wounded in the gun battle.

RELATED: BAIL OUT: First offenders left behind while some career criminals get out of jail free

The risk score for the suspects, Alan Parson, 18, and Richard Sansbury, 26,was calculated as a 1, although a magistrate commissioner ignored the low ratings and set bail for each defendant at more than $1 million.

“To see them rated a risk level 1 is, I think, a travesty and an insult to the officers that bravely protected and served the community, one of them almost lost their life,” Goyeneche said. “This instrument is flawed. I think it is a gimmick and it needs to be revised.”

The risk assessment tool comes amid sweeping reforms by the criminal justice system to lower the city’s pre-trial jail population.

RELATED: 5 prior felony convictions - bailed out twice by group organized by a top assistant to Cantrell

Overall, the reforms have helped push the jail population at the Orleans Justice Center to modern-day lows, but the risk assessment tool has come under fire for not adhering to bail-setting requirements established by state law.

And in many cases, such as that involving the CVS robbery suspects, the risk score determined by the court seems to be largely ignored by the magistrate judge and commissioners setting bail.

The million-plus bail set for the CVS suspects, for example, “shows you that the judges aren't paying attention to the risk assessments,” Goyeneche said.

The MCC report also questions how some suspects see their risk score get lower with subsequent arrests.

RELATED: Mayor Cantrell touted roundup of alleged drug dealers; her assistant helped bail out 7 of them

The study details the case of 18-year-old Theron Glover, now awaiting trial in dozens of car burglaries and auto thefts. After those arrests, Glover was rated by the court at a risk level 3. But while out on bail, Glover was booked with four counts of aggravated battery in a quadruple drive-by shooting. After that arrest, Glover was rated as a 1.

“After he shoots four people, he's rated a level one. So how can there be any logic to that?” Goyeneche asked. “What I am hoping is this is a wake-up call for the public where they recognize that their rights, their public safety is being jeopardized.”

RELATED: Bail out: Rape suspect among 100s of arrestees freed from jail with help from mayor’s aide

City Hall, which has advocated for the bail reforms and has received related grants aimed at lowering the jail population, pushed back against the MCC report.

“The Public Safety Assessment is about using data to inform decisions and improve outcomes,” spokeswoman LaTonya Norton wrote. “The results of the assessment are considered alongside other relevant information, including all factors required by Louisiana statute, and the judge or commissioner uses their discretion to determine if the accused can safely await their trial in the community."

Norton pointed out that the vast majority of suspects who are released before trial – whether on their own recognizance or on bail – make all of their court appearances and avoid re-arrest.

“Since the PSA (Public Safety Assessment) was launched in New Orleans, 92% of individuals recommended for release have completed their entire pretrial period without being re-arrested,” Norton wrote. “Only 5% of individuals whose charges where accepted missed a court date and did not voluntarily return to court at a later date.”

RELATED: Bail out: Is bail reform 'catch and release' or the solution to overcrowded prisons?