The LDH yanked the licenses for Dean's seven nursing homes on Sept. 7, arguing that the conditions at the warehouse merited an immediate shutdown. 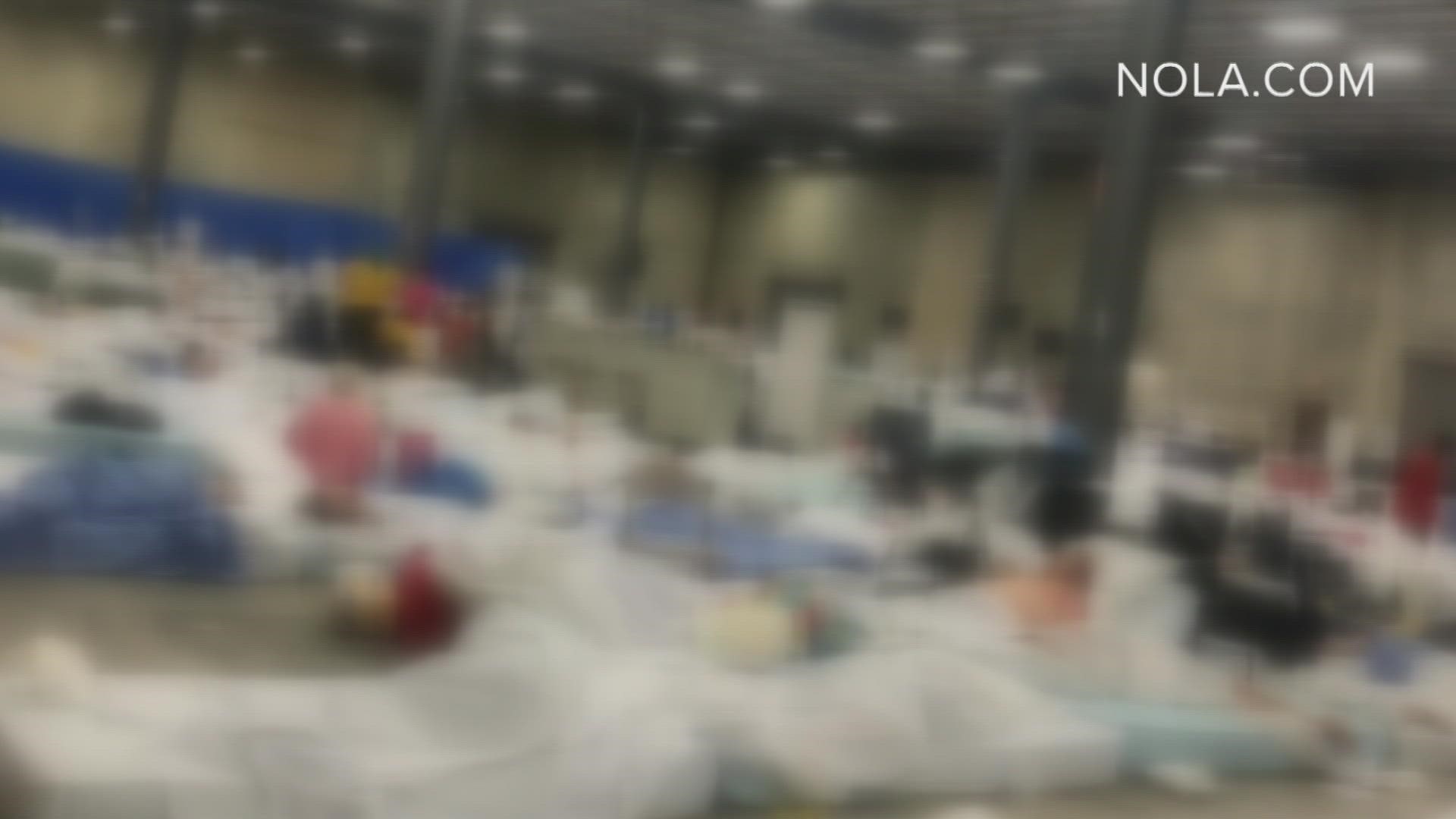 NEW ORLEANS — Embattled nursing home owner Bob Dean has formally appealed to regain licenses to operate seven nursing homes that evacuated to a Tangipahoa Parish warehouse during Hurricane Ida, after the state revoked them citing conditions at that facility.

Dean had his employees move 843 residents from those nursing homes throughout Louisiana to their designated evacuation site, a warehouse he also owned in independence, La.

In the five days that the residents spent there, conditions deteriorated, water got into parts of the building and four people died. The Louisiana Department of Health came in to remove them in what the state called a "rescue."

Since then, the number of residents who have died has risen to 26, with five considered directly "storm-related."

The LDH yanked the licenses for Dean's seven nursing homes on Sept. 7, arguing that the conditions at the warehouse merited an immediate shutdown.

Dean's formal appeal of that decision was filed on Wednesday by an attorney who is representing him in both the licensing revocation and a number of lawsuits filed by former residents and employees. In the appeal, attorney John McLindon argues that there were insufficient grounds to terminate the licenses and that the seven facilities were in "substantial compliance" with local and federal guidelines.

He specifically cited the inspections done by LDH before the storm, arguing that they gave de facto approval that the facility was in compliance with regulations.

"There was no cruelty or indifference to the welfare of any of the residents," McLindon wrote. "The nursing facilities were in substantial compliance with the nursing facility licensing laws, rules and regulations."

"There was sufficient food and supplies ...provided at the evacuation site that enabled the staff at Maison Orleans to adequately care for our residents," Torrel Bridges, the administrator of that facility, wrote in one such summary.

But conditions on the ground were far from comfortable, according to workers and residents who spoke with WWL-TV.

“They kept rolling in more residents. I'm like, 'Oh my God.' we had to keep pushing the residents tighter and tighter to fit everyone in,” said nurse Natalie Henderson, who was stationed at the warehouse for the evacuation.

Residents moved to a single building

Residents at the warehouse have described sweltering heat without A/C, the smell of feces and urine in the air from residents not able to make it to the bathroom, and crowded conditions after they were moved into a single area filled with hundreds of mattresses and other equipment.

In the administrative summaries, staff members say Dean was also responsible for the decision to pack many of the residents into one building.

In multiple accounts, the owner was reportedly concerned about the sturdiness of one of the three buildings where residents were being housed ahead of Ida, which had strengthened in the Gulf to a Category 4 hurricane.

Ida had at that point tracked east, and some paths had it maintaining strength as a Category 3 hurricane over Independence. Administrators said Dean worried that "the metal building" where residents from two of the nursing homes were housed would not hold up to the storm's intensity.

On Aug. 29, hours before the storm struck Louisiana's coast, those residents were removed from the metal building and placed in the main "concrete building" with most of the other residents.

That night, when the storm passed overhead, the other building where residents were being kept — dubbed the "cinder block building" in the administrator accounts — began taking on water. Residents from that building were then moved into the concrete building as well, putting all 843 residents under one roof.

Later evaluations by health and fire safety officials noted that in the concrete building, residents were placed on mattresses on the floor with inches between them, leaving them with no privacy or protection from COVID-19.

“We didn't have privacy to take care of them,” an aide who asked not to be identified told WWL-TV’s Erika Ferrando, “Too many people, no privacy. You changing everybody right by everybody. And with the COVID, it just wasn't enough space. It was just awful. Awful.”

According to McLindon, all seven facilities carried out their evacuation plans as directed, and that each resident was sent with clothing, medication and medical charts.

Attorney says families were given options

He also said the family members of each resident were alerted about the evacuation and "given the option to pick up their loved ones."

But according to both families who have spoken with WWL-TV and supporting material McLindon enclosed with the appeal, not all families were notified ahead of time or given that choice.

Patricia Taylor, the administrator for Park Place, one of Dean's nursing homes in Orleans Parish, said in her summary of the evacuation that some families weren't notified because of a staffing issue.

"The emergency preparedness plan was followed except that staff members were unable to call all family members of residents," Taylor wrote. "The social worker started to call families on Friday, August 27, 2021, but she failed to come to work on Saturday, August 28, 2021."

Another summary from staff members at Maison De'Ville of Harvey also indicates families were not given any option to pick up their loved ones. According to the timeline they provided, the nursing home's social worker began calling families on Aug. 28, after they had already evacuated, to let them know where their loved ones were.

In the meantime, Dean's appeal and the documentation used to support it raise even more questions about the rigor of the evacuation plans themselves.

It's unclear why some facilities told residents to pack three or four days' worth of clothes when their evacuation plans indicated they would ask for a week's worth of laundry. Dean's appeal indicated that residents were told to pack clothes for several days, but did not specify how long they intended to be at the warehouse.

McLindon, in an interview with WWL-TV, called the warehouse a stopgap measure, never meant to house the residents for long.

"They're intended to be temporary facilities until you can get people back to where they belong," he said.

Other evacuation sites away from Southeast Louisiana wouldn't have worked, he said, because of the frail condition many of the residents were in.

"That's a long drive to transport elderly people," McLindon said. "You want to get them out of harm's way, but you don't want them in an ambulance or a van for five hours, six hours."

The new details about Dean's decision to move residents from one building to another over integrity concerns even before the storm hit do not explain why an unused warehouse with buildings constructed from metal sheets and cinderblocks was considered an appropriate evacuation facility.

But Dean's attorney defended his client's decision to evacuate to the warehouse and put hundreds of residents into the single building.

"They made the very wise decision and said 'look, lets put everyone in the strongest building. Did that lead to a little crowding? Yes, but I think most people can agree it's a little bit better to be crowded than in an unsafe building," McLindon said. "I think that what the walls look like is not that important. What's more important is the staff and all those things being there."

Although the documents make clear that Dean was responsible for the decision to evacuate in the first place, they do little to shed light on why he made that decision. His were the only nursing homes in Orleans Parish that did not shelter in place, and many others in the storm's path chose to stay and hunker down instead of moving their residents.

A possible explanation comes from the account, included in the appeal, from one unnamed administrator who said Dean fired them for questioning his decision to evacuate.

He recounted a text conversation shortly before midnight on Aug. 26 with Dean:

"Bob Dean texted me while I was asleep urging me that we need to get ready to move because there is a 30-40 foot tidal wave coming."

No such tidal wave was ever reported or predicted in connection with Ida.

The next morning, he texted again around 6 a.m. saying they needed to evacuate. When the administrator urged caution, and to wait for the parish's emergency operations center to give advice, he was fired via text message.

"A few minutes later, he then called me, still angry and unequivocally fired me and told me to get all of my things out of his building," the administrator wrote.

That administrator still went to the warehouse with the patients, citing an "obligation to these patients."

McLindon disputed the administrator's account, saying Dean instead told him to evacuate the residents or be fired.

"He was adamant that we get these people out of harm's way. I'm not even sure why that decision is being second-guessed," McLindon said. "I think it was a more prudent decision, I think Mr. Dean erred on the side of caution."