The engineer said it was surprising that other contractors working on the project didn’t raise alarms about the design. 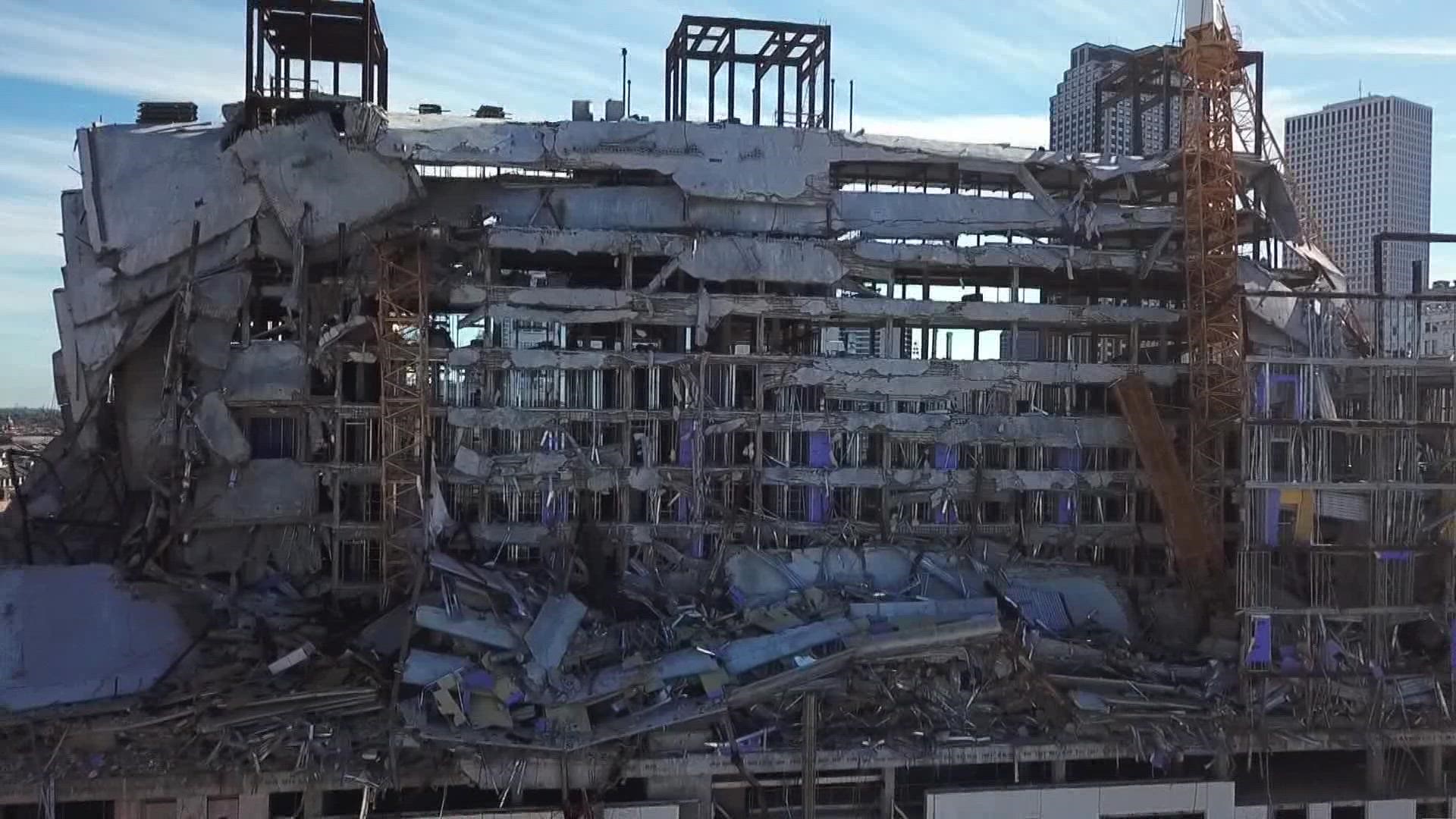 NEW ORLEANS — A structural engineer who helped demolish the partially collapsed Hard Rock Hotel last year says video of the deadly disaster shows the building’s steel failed at the 16th floor of the 18-story structure, something he believes will be crucial evidence for holding someone accountable for the collapse.

“You can see where the two upper floors are moving kind of together rather than individually,” Walter Zehner said. “And that indicates that the 16th floor failed and the other floors just came down with it.”

Zehner was hired last week by the owner of the ill-fated Hard Rock project, 1031 Canal Development, to serve as a technical spokesman.

His analysis of the way the building collapsed supports what WWL-TV reported last week from an unreleased report by an engineer with the federal Occupational Safety and Health Administration. Sources with knowledge of that investigation told WWL-TV that the engineer found 81 beams supporting the 16th floor were not up to code and dozens of them were “grossly undersized.”

The engineer reported connections of beams to columns were also “grossly undersized,” and that’s what Zehner said he found when he reviewed the structural plans and calculated what loads the beams listed in the blueprints could handle.

Before being hired by the owner, Zehner advised St. Louis-based SID Engineering on how to safely bring down the pancaked steel and concrete high-rise.

He echoed the findings of the OSHA engineer, who, according to sources, said the collapse was “waiting to happen” because of the structural steel designed by the project’s lead engineer, Heaslip Engineering.

“I saw it right away when I looked at the plans, and I know other engineers I've talked to said the same thing, so I don't know how that got missed. I really don't,” Zehner said.

James Heaslip, the engineer of record who stamped the Hard Rock structural plans, said his company is not to blame.

“We have denied and are contesting all allegations of fault and negligence asserted in the legal proceedings related to the Hard Rock Hotel collapse, and we stand behind our company’s track record of designing projects that meet applicable engineering standards,” Heaslip said in a statement.

WWL-TV asked Zehner about aesthetic changes sought by lead developer Mohan Kailas -- his client. Kailas wanted to raise the ceilings of penthouse apartments on the top two floors, which led to the use of thinner beams under the 17th and 18th floors.

Zehner said the video proves the smaller beams and columns under the 17th and 18th floors didn’t cause the collapse, because the beams under the 16th floor were always too small to support all three top floors. He said Heaslip Engineering is ultimately responsible for that.

Zehner said it was surprising that other contractors working on the project didn’t raise alarms about the design. But Brad Morrow, a supervisor who worked on the project for Hub Steel, the steel fabricator and installer, said he did voice concerns.

Morrow left the project after the 10th floor was built, so he wasn’t there when the 16th floor beams were installed. But he took hundreds of photos of things that didn’t look right to him, including connections between beams and columns where metal clips and bolts appeared missing. Now those photos are potential evidence in a criminal investigation and in civil lawsuits.

“None of us had seen a lot of the things done before, but we put our trust in the engineers, thinking, ‘OK, well, it's got to be structurally sound,’ even though we didn't think it was correct,” Morrow said.

Morrow said he saw many beams and columns connected by one L-shaped metal clip on one side of the column but not on the other.

“Normally, you would have two clips on each end,” he said. “So, you're losing basically half the bolts and half the structural integrity of the beam and the connection.”

He said he questioned other construction supervisors, but always got the same answer: “That's what the print said. That's what the spec said. So, that's what we had to go with.”

Terry Knister, an attorney for Hub Steel, said the company couldn’t comment on Morrow’s photographs and statements without reviewing them.

But he noted Morrow left the job site “well below where the collapse originated.”

“Any concerns voiced by any Hub Steel employee were addressed by Hub Steel through the appropriate job site chain of command, which included other companies either working at the site and/or on the overall project,” Knister said. “Hub Steel has denied all allegations of fault made against it in the pending legal proceedings.”

Zehner and others said the best way to protect against a recurrence is to require a peer review of the structural drawings by an independent engineer.

“Because there's nobody at the city to review the structural aspects of a drawing. If it's got an engineer’s stamp on it, they accept it,” Zehner said. “But I think that if any engineer would have done a peer review of this building, this would have never happened.”

It took two years, but the City Council finally voted this month to require engineering peer reviews on all high-rise building projects.