A refinery in Krotz Springs, near Opelousas, was at the top of the national list of benzene emissions. 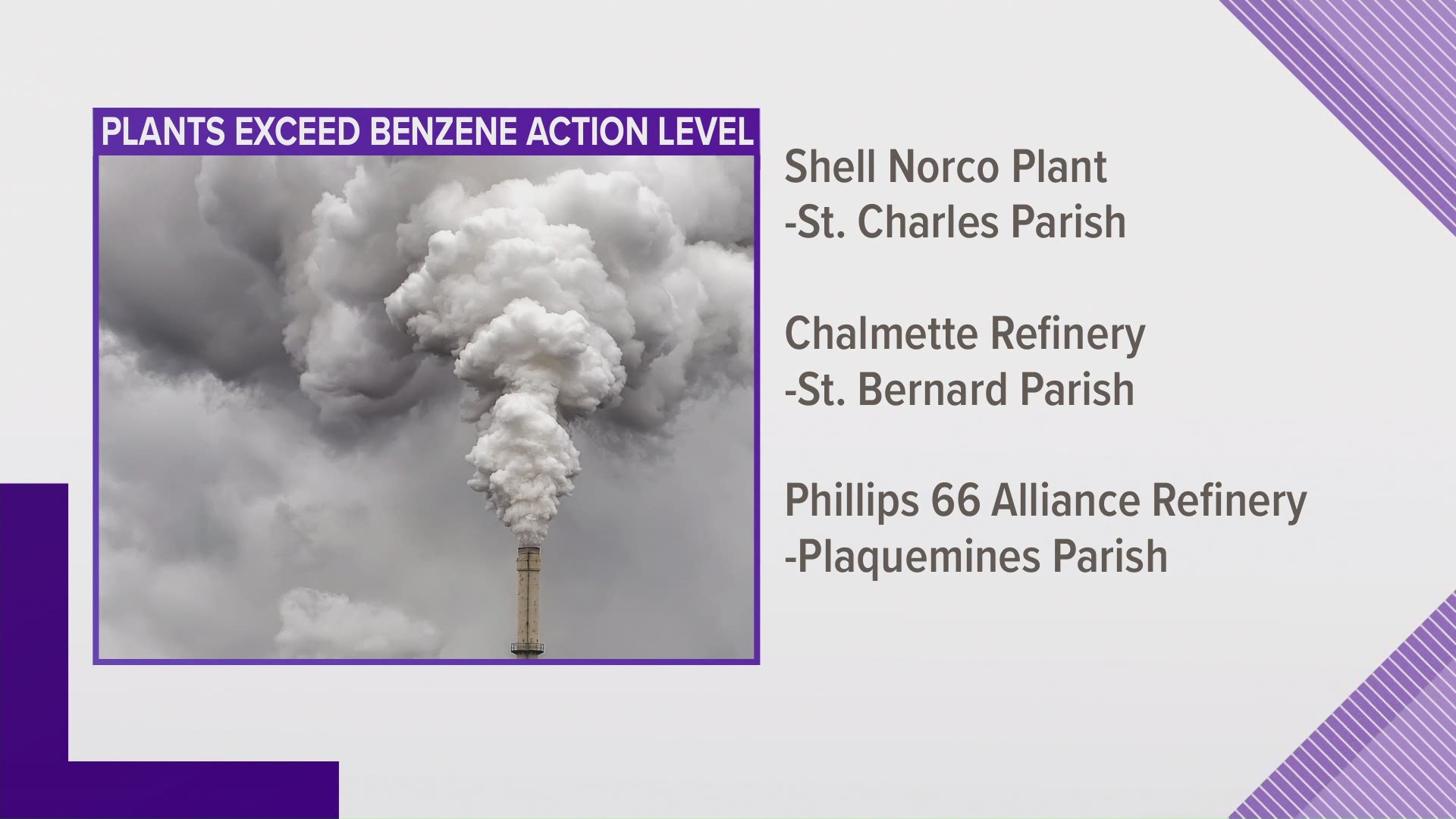 NEW ORLEANS — Five of the 13 U.S. refineries emitting too much of a cancer-causing chemical into the air are located in south Louisiana and three of them are in the New Orleans area, according to the latest federal air monitoring data reported by a national environmental watchdog group this week.

A refinery in Krotz Springs, near Opelousas, was at the top of the national list of benzene emissions, which was compiled by the Environmental Integrity Project using data gathered by the U.S. Environmental Protection Agency.

The Krotz Springs refinery, which was purchased by Delek US in 2017 from Alon Refining, reported an average concentration of 31 micrograms of benzene per cubic meter of air over the course of 2020. That’s more than 3 times higher than the EPA’s so-called “action level” of 9 micrograms per cubic meter, at which point a refinery must take action to limit its benzene emissions.

A Delek spokesperson said the company made several upgrades and inspections of its storage tanks in September 2020 that have vastly reduced benzene levels measured at the fence line so they are consistently below the 9 micrograms per cubic meter threshold.

"We anticipate the refinery's rolling 12-month average will fall below 9 micrograms per cubic meter by this summer," Delek's statement said.

This is the third year of a U.S. Environmental Protection Agency program to monitor benzene emissions at the fence line of 142 American refineries, to make sure the concentration of the toxic chemical in the air do not exceed 9 micrograms per cubic meter in places where people live near the plants.

That concentration is about equivalent of 3 gallons worth of benzene in the 1 billion gallons of air that would fill the Superdome. It’s not considered a dangerous level for human health, but it is the “action level” the EPA set to require refineries to reduce their emissions.

WWL-TV reached out to all four companies with Louisiana refineries on the list – Delek US, Shell, Chalmette Refining and Phillips 66.  Chalmette and Phillips 66 responded Friday and Delek US provided a comment Saturday.

“As part of our overall effort to protect the environment, we are dedicated to controlling emissions from our operations, and we take prompt action to investigate and implement corrective actions when and where needed,” Phillips 66 spokesperson Melissa Ory said.

Chalmette Refining openly touts its dedication to the EPA monitoring program on its website. But its fact sheet about benzene emissions makes it sound as if it didn’t exceed the 9 micrograms per cubic meter threshold, when it in fact exceeded it each of the last two reporting years.

“Chalmette Refining’s ‘Action Level’ is below the 9 μg/m3 (micrograms per cubic meter annual average) set by EPA,” the fact sheet says, referring to the point at which the company starts taking action to reduce emissions, not the plant’s actual emissions average, which was 11.2 in 2020 and 12.1 in 2019.

Chalmette spokeswoman Elizabeth Ellison-Frost said the refinery has made several investments in equipment to bring the average emissions below the 9-microgram threshold.

She also wanted to emphasize that “Chalmette is in compliance with the benzene standards” and “exceeding the benzene ‘Action Level’ is not a violation of the national emission standards for hazardous air pollutants (NESHAP) from petroleum refineries or a violation of any other standard.”

Delek detailed some of the steps it took to reduce its benzene emissions last September: third-party inspections of its storage tank roof seals, removal of some tanks from service, moving high-benzene product from an outdoor tank to an indoor tank and the use of monitors that tell when a spike in benzene levels is occurring, helping to pinpoint sources of high emissions.