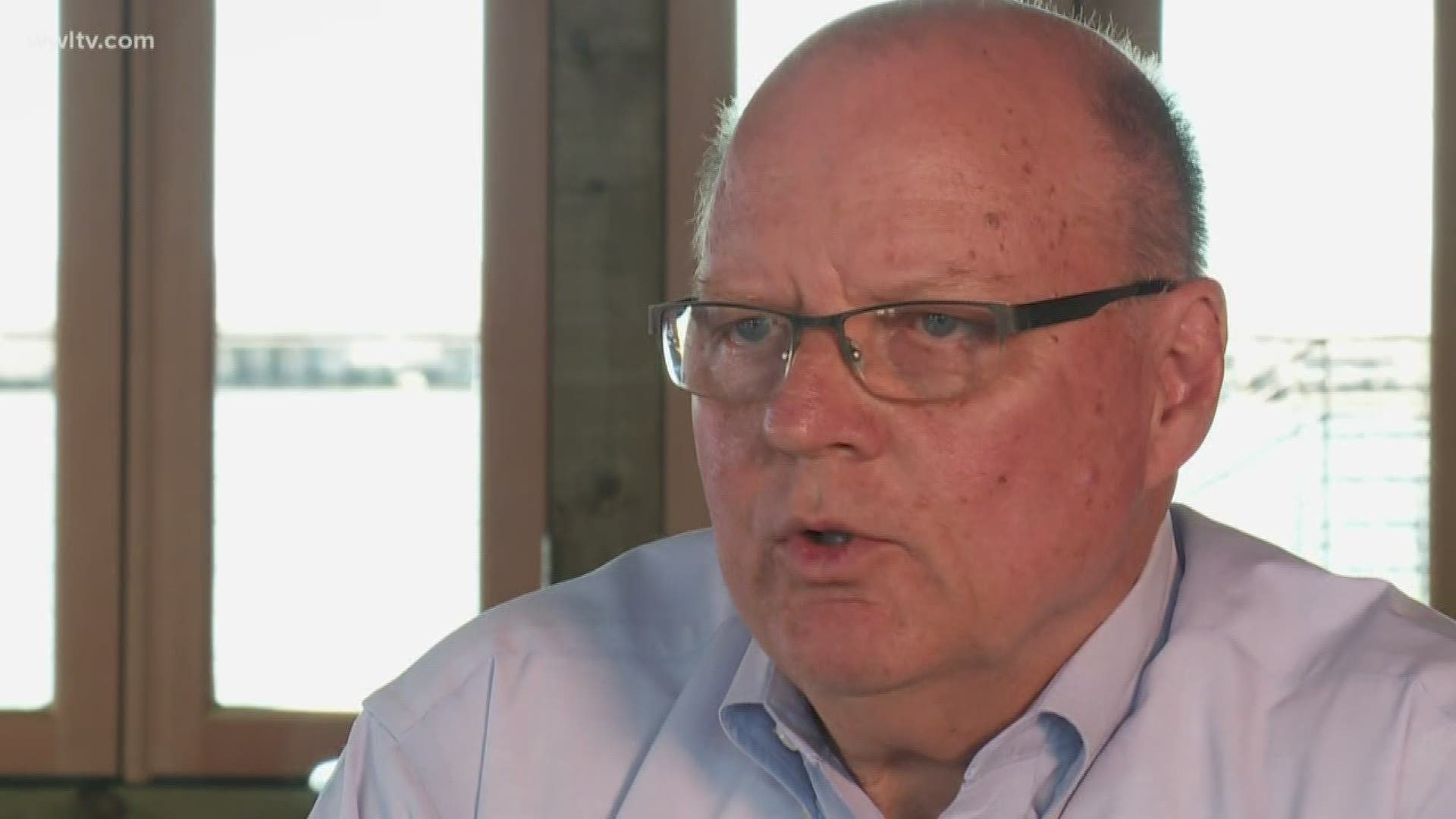 As federal agents launch a criminal investigation into an alleged investment scam, the man in charge of the investments, Roland Von Kurnatowski, blamed a former business partner as well as negative media coverage for his current struggle to pay investors, lenders and a government agency.

In a series of interviews, Von Kurnatowski said that a falling-out with surgeon and businessman Eric George has been part of the reason for his issues paying back investors. George said that their relationship, which involved millions of dollars in property investments, including the Orpheum Theater and several other buildings throughout Louisiana, soured due to some of Von Kurnatowski’s business decisions, a claim Von Kurnatowski disputes.

The new comments from George come amid darkening clouds for Von Kurnatowski. Some investors say they have been interviewed by FBI and Postal Service agents about their investments with the New Orleans businessman, who until recently owned the famed music club Tipitina’s. The U.S. Department of Justice told WWL-TV that it would be issuing a subpoena for a May news report on the fund.

But Von Kurnatowski maintains that investors in his fund, which originally traded U.S. Treasury bonds and treasury-linked derivatives, enjoyed large returns on their investments for years. Investors’ share of the fund, known as Bond Fund One, or BFI, is still about $9.5 million, with him controlling another $4 million, he claims.

Years ago, he said that he notified investors that the fund, which was never registered with any financial regulator, would invest in real estate instead of treasuries. Because of cash-flow issues, he says he has not been able to liquidate anyone’s shares since 2017. Investors stopped receiving monthly statements in January 2018, and Von Kurnatowski did not explain why the fund suddenly stopped generating returns in October 2017, according to his own paperwork.

But investors, several of them elderly, allege in a series of lawsuits that Von Kurnatowski bilked them out of millions of dollars by convincing them they were investing in safe, easily cashed Treasuries, and never telling them he had used their money to finance his numerous real estate ventures.

Von Kurnatowski said he’s sympathetic to the plight of his investors. He said he has tried to work out ways to pay them in installments.

“The question is, can I do it? And why can't I? And it doesn’t get back to doing bad projects and doing too much at once,” he said. “It gets back to being left in the lurch.”

Von Kurnatowski contends he was “left in the lurch” by George, and that’s why he can’t pay his investors. But George says it's Von Kurnatowski's financial problems that caused their split, not the other way around.

The relationship of the two businessmen dates to 2012, according to both men, who say they met when George operated on Von Kurnatowski’s hand.

Von Kurnatowski’s sterling reputation was what attracted many of his investors, including George. Many said they were impressed with Von Kurnatowski’s work owning Tipitina’s and the affiliated Tipitina’s Foundation, a nonprofit charity that has provided more than 5,000 instruments to schools and bands and developed Tipitina’s Music Co-ops, a network of music rehearsal spaces and recording studios across Louisiana and in Commerce, Texas.

Last year, The Advocate reported that Von Kurnatowski named several businessmen to the Tipitina’s Foundation board without informing them of any decisions or board meetings. Von Kurnatowski said he, his wife and the foundation’s lobbyist, Dean Dupuy, who died in 2018, made all the decisions. George said he was named to the board without being notified of any board meetings.

George said he liked the private development concept Von Kurnatowski was pursuing and formed a 50-50 partnership with him called Studio Networks. George said he provided capital while Von Kurnatowski used his own construction crews to renovate abandoned downtown buildings in New Orleans, Shreveport, Alexandria and elsewhere.

Then they teamed up on a $14 million restoration of the Orpheum Theater that was widely praised.

“I think it was done state-of-the-art, and it was a real highlight, not only for the city but for the people here, and I was proud to say I'd given something back,” George said.

But then came some questionable moves, George said. While building apartments in Shreveport and renovating the Orpheum, Von Kurnatowski formed an aviation company with restaurant owner Bill Hammock and mortgaged a private jet in 2014, using it to fly to the various co-ops and real estate projects.

In 2016, Von Kurnatowski leased public land next to South Shore Harbor in New Orleans East for $12,000 a month and began building a $15 million event venue called Lakeshore Landing at the old casino pavilion there. Initially, George said that he was interested in partnering with Von Kurnatowski on the Lakeshore Landing project, which also includes a store, a fuel dock and a special boat house for a historic PT boat used for tours by the National World War II Museum.

“Within a week of his proposal I was like, 'That's not something I want to do,' and I think he had some trouble moving forward with the banks,” George said.

Von Kurnatowski confirmed that he’s had trouble getting bank financing for the Lakeshore Landing project, but blames negative press coverage for that.

“The financing that I've been counting on... I mean, I can't do a project this size and have finished the work in Shreveport all out of cash,” he said.

According to lawsuits by investors, Von Kurnatowski started bouncing checks and missing payments in 2017. News reports in The Advocate related to Von Kurnatowski’s business and financial dealings first appeared in 2018.

Records from the state Non-Flood Asset Management Authority, also known as the Lakefront Authority, show Von Kurnatowski bounced two checks for rent of the Lakeshore Landing development last year totaling $74,000. The authority, an offshoot of the old Orleans Levee Board that runs New Orleans Lakefront Airport and other areas outside flood protection, sent Von Kurnatowski default letters, both for the Lakeshore Landing lease and for the offices of his aviation company, F&M Aviation.

Von Kurnatowski blamed both the Lakefront Authority and his investors for cashing checks when he wasn't ready. For example, when checks to investor Ray Main bounced, Von Kurnatowski said in court documents that the Main family had failed to wait for proper approval to cash the checks.

He also said that the former executive director of the Lakefront Authority was supposed to wait to cash his rent checks while he was asking the government body to dredge in the lake to keep the entrance to Southshore Harbor from silting in.

When WWL-TV sought Von Kurnatowski’s public lease file and related financial records from the Lakefront Authority, the government agency said it provided the entire lease file. But the default letters and financial statements showing bounced checks were not included. When WWL-TV questioned Lakefront Authority Executive Director Louis Capo about the missing documents, he said he did not have any letters sent by his predecessor, Jesse Noel.

WWL-TV was able to obtain copies of the default letters and statements from sources. The station then reached out to Noel, who confirmed those letters and financial statements were public records that had been in Von Kurnatowski's lease file when he was the Lakefront Authority’s executive director.

WWL-TV asked Capo and Lakefront Authority board chairwoman Wilma Heaton for interviews about the discrepancies, and they declined. By law, public agencies must provide all public records when they are requested.

George said he had trouble getting critical financial information about his own partnerships with Von Kurnatowski.

“We couldn't get a copy of the financial records, the profit-and-loss statements and those things,” he said.

As the partnership between Von Kurnatowski and George soured, George sold his share of Studio Networks to Von Kurnatowski’s sister, Joan Hooper, and her two sons for $2 million. The Hoopers are now suing Von Kurnatowksi, alleging he misrepresented rental income and ongoing construction costs to get them to buy into the projects. Von Kurnatowski has denied those claims.

To complete their split, Von Kurnatowski also tried to purchase George’s half of the Orpheum, and said he raised $4 million to do so. But he said George kept raising his asking price.

Eventually, George moved to purchase Von Kurnatowski's half of the Orpheum instead. George said he was surprised to find out Von Kurnatowski had already sold $450,000 in Orpheum ownership shares to WWL Political Analyst Clancy DuBos and his wife, Margot, the former publisher of Gambit magazine.

A copy of the Orpheum operating agreement, provided by both George and Von Kurnatowski, states that neither owner could sell his shares without written consent from the other.

“And when he gave it to me, I believed that that was in fact the real operating agreement,” DuBos said. “And it's just very disappointing to find out that it's not.”

Asked why DuBos received a different version of the operating agreement, Von Kurnatowski said it could have been a mistake. “I think this must have been a version we had contemplated. I really don't know what the timing was,” he said.

At about the same time, some of the bond fund investors said they discovered their money was backing Von Kurnatowski's real estate projects, even though they had signed documents saying it was only for trading Treasury bonds.

When asked to explain that, Von Kurnatowski again blamed a clerical error.

In the last six months, Von Kurnatowski has also sold Tipitina's for $5 million, the Tipitina’s Music Co-ops and his half of the jet, he said. But he said he still can’t pay the investors their bond fund balances.