A spokesperson for Rep. Carter said significant progress has been made despite numerous delays that were out of the construction team’s control. 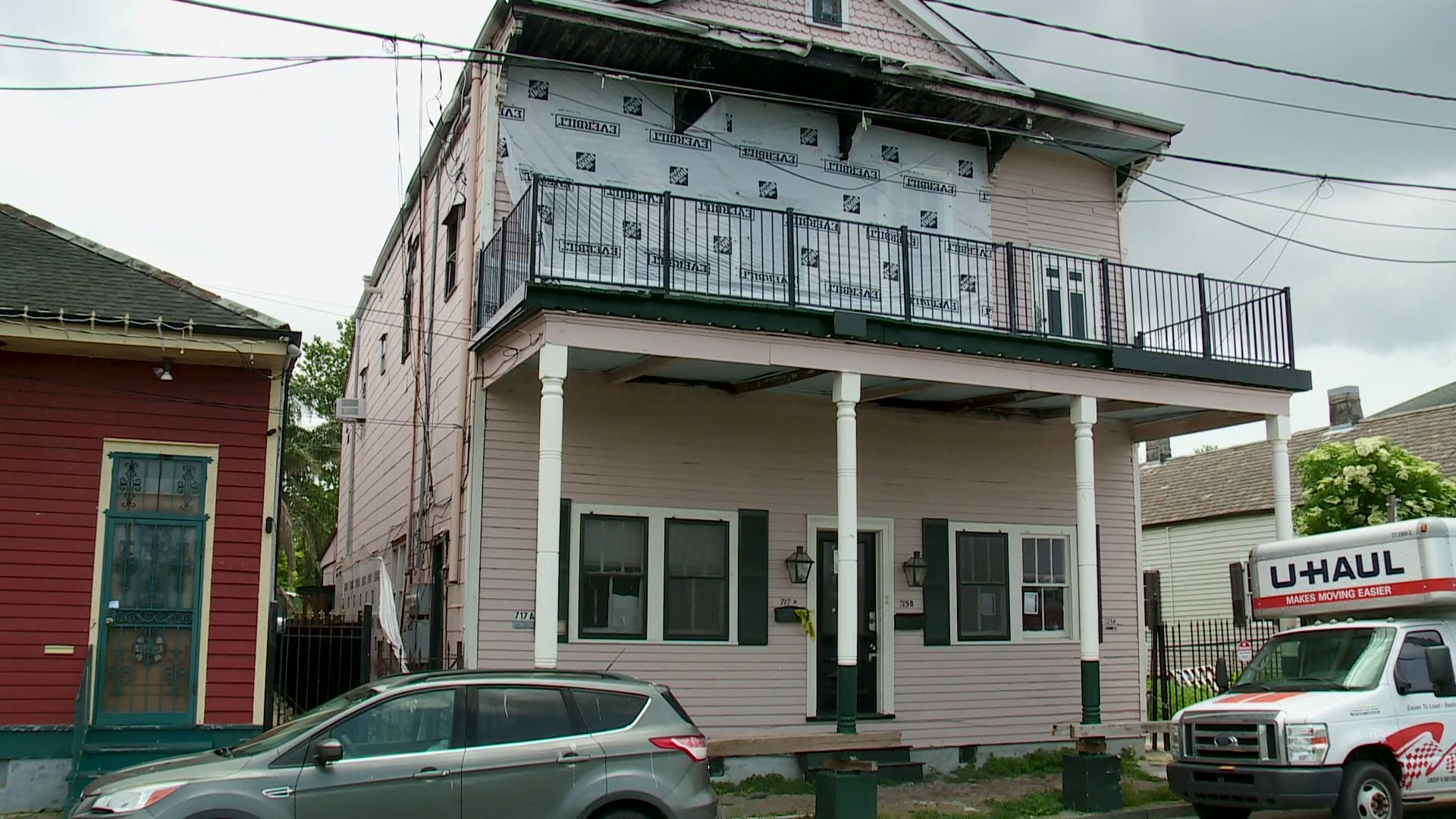 NEW ORLEANS — When he was running for his current seat in Congress, former New Orleans City Councilman Troy Carter promised to move at “warp speed” to renovate a blighted, burned-out rental property he owns in Algiers Point.

But more than six months after the city granted him a renovation permit, and four months after a joint investigation by WWL-TV and The Times-Picayune | New Orleans Advocate questioned Carter about years of code violations and delayed repairs, doors on the property were again wide open this week, with the side yard overgrown again and neighbors reporting no apparent progress with construction in at least six weeks.

“It's like Lucy with the football and he's coming up to kick it and she pulls it away,” said Ryan Hughes, who owns the house on the other side of the overgrown lot.

Hughes’ tenants, Carli and William McBride, are moving to North Carolina after two years living next to Carter’s derelict fourplex. They said the blight is not the main reason they’re leaving, but it didn’t help keep them in New Orleans either.

“It’s just really disgusting, like trying to hang out in the backyard, and you look over and there's just all kinds of critters that shouldn't be there because of the neglect of the yard,” Carli McBride said.

As William McBride prepared to drive their moving truck away Thursday, he said Carter’s promises during his congressional campaign had gotten their hopes up, if only briefly.

“When you did the first story (Jan. 27), they came over and tried to clean it up as quick as they could,” he said. “Tried to make it look decent, I guess. But yeah, once the election started, they haven't done anything.”

The neighbors said the initial flurry of activity after the WWL-TV story aired quickly petered out. Hughes said the crews didn’t initially have an electrical permit, so he let them connect to his electricity and provided them with water so they could use the toilets in Carter’s house.

The city granted Carter’s property an electrical construction loop permit for a temporary power pole on March 19, but Hughes said the work actually slowed after that. He said the crews put construction wrap on much of the house on April 10, the day before early voting started in the congressional runoff election between Carter and fellow state Sen. Karen Carter Peterson.

Hughes said he hadn’t seen any construction activity at the property since.

WWL-TV asked Carter’s congressional spokesman about that Thursday, and within hours a man appeared at the property to cut the grass and pick up debris.

Another spokesman for Carter’s renovation project said the neighbors’ characterization of what’s been happening at the property is incorrect. He said significant progress has been made despite numerous delays that were out of the construction team’s control.

“It is unfortunate that numerous factors including staffing shortages in the construction trades, COVID-related delays in city permitting, and unprecedented rapid and on-going increases in the costs of lumber and other building materials have combined to slow this process down,” Greg Beuerman said on behalf of the project.

Beuerman said it took about two months after the electrical construction loop permit was granted to get Entergy to start service to the temporary power pole.

He also said that just because crews weren’t there hammering and sawing doesn’t mean work hasn’t continued after April 10. He provided emails between construction managers and subcontractors setting up meetings at the property in mid-April.

“Insinuations that no progress is being made and that no work is being done are unfortunate, without appropriate context and have no real basis in fact,” Beuerman said.

Carter won the runoff election on April 24 handily, beating Peterson 55 percent to 45 percent. But in the precinct where his dilapidated house sits, he lost by 40 points, 70 percent to 30 percent.

Neighbors have been criticizing Carter about the appearance of the property for years. Carter received a federal forgivable loan under the Louisiana Road Home Program to fix the property after Hurricane Katrina and rent the four apartments to low-income residents. He rented the apartments, but neighborhood groups questioned if Carter had actually made the proper repairs required to convert the loan into a grant.

The city issued more than a dozen code violations against the property in 2018. Carter challenged those citations but lost the case before an administrative judge. Then, in November 2019, a fire broke out on the second floor, charring the façade, leaving two dogs dead and displacing all four tenant families.

In January, Carter hadn’t paid any of his code enforcement fines, which at the time totaled more than $23,000. This week, the city said Carter has paid some of those fines, which public records show now tally more than $13,000.

The city said Carter has all the active permits he needs to complete repairs and will be given the opportunity to seek a reduction in fines after renovating.

After the fire in 2019, Carter told The Lens website that he would move quickly to renovate the property. But it took a full year to get the renovation permit from the city. Carter blamed the city’s permitting office for unfairly delaying an expensive renovation project that he said was thoughtfully and clearly laid out in architectural plans and other documents submitted to the city for review in March 2020.

The city said there was no undue delay and blamed Carter for repeatedly failing to submit plans that adhered to municipal and historic district codes before finally granting the renovation permit in November 2020.

In January 2021, Carter provided WWL-TV with a detailed timeline for construction that called for mechanical, electrical and plumbing work, as well as significant interior repairs and the hanging of drywall, to be well underway by April and May.

“Man, we are at warp speed,” he said Jan. 26. “We have a timeline that you have there that we shared with you.”

Questioned about the property on WWL-TV during the last live debate before the election, Carter again told neighbors he was doing everything he could to overcome roadblocks from the city permitting office.

“The neighbors are right to be concerned that it took longer than it should have,” he said. “And we certainly tried, and we’ve been working on the property and it’s being done now.”

Hughes said he understands delays can happen in construction. But he points to homes a few blocks down the street that have been completed since the fire and wonders why Carter can’t at least communicate with the neighbors about what’s holding up his work.

“You had enough time to post up ‘Elect Troy Carter’ signs all over the neighborhood,” Hughes said. “Why can't you just put something next door going, ‘Hey, I apologize, we've got a delay’? None of this has to happen.”