Contained but not capped: Some of America's longest oil spill still escaping into Gulf

Even on the worst days, 96 percent of the leaking oil is still being captured, according to the Coast Guard's contractor. 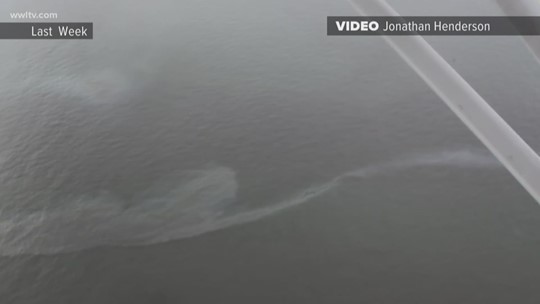 NEW ORLEANS — Sporadic leaks continue at the site of the nation’s longest oil spill, about 12 miles off the tip of Louisiana, more than two months after the head of the U.S. Coast Guard’s spill-response team declared “containment operations complete.”

But even as Capt. Kristi Luttrell celebrated the accomplishment, she warned that some leaking would continue.

“Some days we’re going to have some sheening on the surface, due to some bottom currents and environmental conditions,” she said in an interview with WWL-TV on May 17. “However, we feel we can continue to make adjustments to the system to dial that in and hopefully, really close to 100 percent.”

Sure enough, environmental watchdogs like Jonathan Henderson and the group SkyTruth have been collecting aerial video and satellite images of sheens since the containment device was installed. A satellite image from SkyTruth showed a 17-mile slick on July 5. Henderson flew over the site and tracked a slick over several miles July 19.

Taylor Energy, the company responsible for the spill, used its own overflights to estimate 37.5 gallons and 6.5 gallons spilled on those two dates, respectively. The contractor hired by the Coast Guard to deploy a patented containment device to capture the leak just above the sea floor largely agreed with those estimates, saying the July 5 spill was the worst single-day discharge since containment began, totaling 42 gallons.

Timmy Couvillion, owner of the Coast Guard’s Belle Chasse-based contractor Couvillion Group, said the shallow metal capture device had to be placed above the sea floor to avoid disturbing the loose mud-pit that covers the source of the leak.

Shaped like a 40-by-40-foot box lid and hooked onto the jacket of the toppled oil platform lying 450 feet below the Gulf’s surface, the containment device is perched 7 feet above the sea floor on one side, but more than 20 feet above the oatmeal-like mud pit on the other side.

That means some oil is bound to escape when the ocean currents push towards the side with the larger gap, Couvillion said.

“We had to make it so sediment doesn’t clog the system, so we lifted it above the sea floor,” he said. “The sacrifice is a tricky current that blows in a certain direction may blow some of the plume out of the capture device.”

The environmental group Healthy Gulf analyzed satellite data from the National Oceanic and Atmospheric Administration (NOAA) and found only seven days in May and June when a sheen was detected at the site. That’s a quarter of the days detected over the same months in 2018, before containment operations began.

Luttrell said the federal government owns the recovered oil and sells it at a recycled rate to reimburse Couvillion for its costs, which have topped $30 million.

Couvillion says the device has collected and pumped off more than 100,000 gallons in three months, but the sheen won’t stop completely until the leaking well or wells are plugged.

“We can’t reiterate enough times that this is a temporary solution to a long-term problem,” he said.

Just getting the temporary solution was a major accomplishment. Luttrell suddenly decided to federalize the spill response last fall after the Coast Guard had spent the previous decade agreeing that trying to collect the oil at the leak’s source would do more environmental harm than good.

Environmental groups and scientists spent about seven years disputing Taylor’s measurement of the spill and pushing for a more aggressive government response, something that came a day after a front-page story in The Washington Post showed how the Taylor spill could hurt President Donald Trump’s efforts to expand offshore oil drilling to new federal waters, off Florida and up the East Coast.

But now that containment operations are largely working, Healthy Gulf has launched a campaign calling on Congress to open an investigation into why it took so long to respond, to fine Taylor for the oil that leaked unchecked for more than 14 years and to come up with a permanent plugging solution.

But that’s where it gets even more complicated. Taylor Energy has claimed an “act of God” defense to argue it is not liable for federal pollution fines.

The company still relies on a 2013 assessment from government scientists that the oil isn’t leaking from a well, but from deposits of old oil that leaked a decade ago and have been trapped under the mudslide. Luttrell now says the oil is actively leaking from Taylor’s wells. But the company argues any new drilling operation to try to plug the buried wells could cause an environmental catastrophe.

The New Orleans-based company was founded by the late Patrick F. Taylor, who created Louisiana’s school tuition assistance program in the 1980s and the popular TOPS college scholarship program in the 1990s. He died in November 2004, just two months after the oil spill began.

His widow, Phyllis Taylor, is the CEO of Taylor Energy Co., which sold its assets and stopped drilling in 2008 to focus on stopping the spill from under its collapsed Mississippi Canyon 20A platform.

Taylor put $666 Million Dollars in a trust fund under an agreement with the U.S. Interior Department to plug the leak, remove the downed platform and clean up the site. But the company only spent about a third of the money before suing to get back the remaining $432 million, claiming it had done all that it could safely do to stop the leak.

Under the agreement, Taylor draws quarterly interest payments from the trust, but argued in the Federal Claims Court that it could have made $40 million more between 2015 and 2018 if it had gotten back the trust principal.

A federal judge in Washington ruled against Taylor earlier this year, and Taylor is appealing that decision.

The company also continues to sue the Coast Guard and Couvillion in New Orleans federal court, fighting against the containment operations. The government argues those claims should be moot now that Couvillion’s device is working.

That lawsuit was assigned to new U.S. District Judge Wendy Vitter, but she had to remove herself from hearing the case with a conflict.