Customer stunned to find scammer knew how much she owed Entergy

The scammers are using real numbers from Entergy customers' bills to gain their trust. 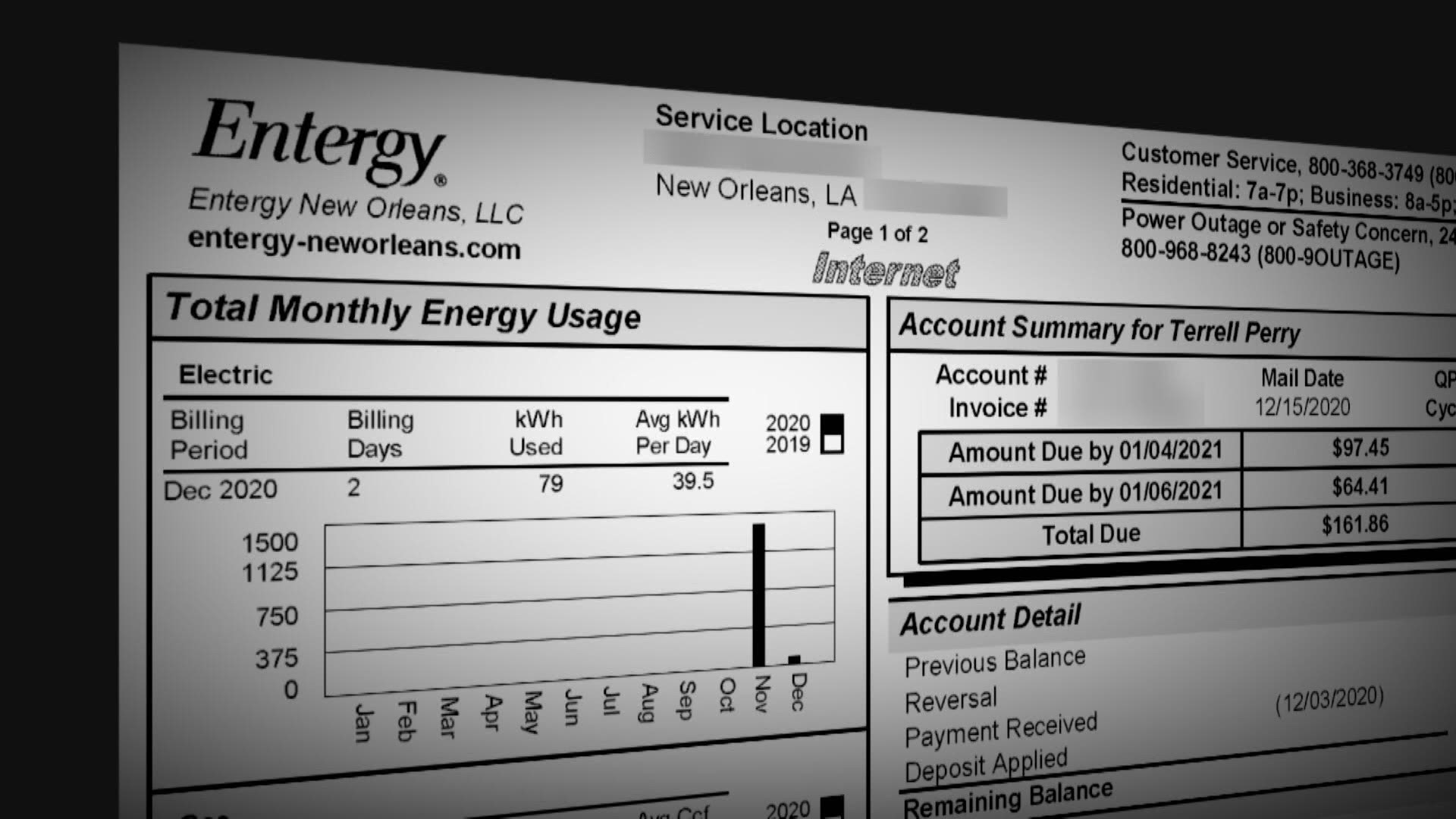 NEW ORLEANS — Terrell Perry was skeptical when she received an automated phone message in September claiming to be from Entergy New Orleans, threatening to shut off power to her Gentilly property in 45 minutes if she didn’t call and pay an outstanding balance.

Perry worked in marketing in New Orleans before moving to Atlanta, and as a property owner in New Orleans, she knows telephone scams involving Entergy billing have been on the rise.

But she almost fell prey to one of those scams because it was far more sophisticated than she expected.

“I get a call from these guys who are demanding payment and they're saying, you know, they knew exactly how much I owed. They knew that it was a deposit that I owed,” Perry said. “It's really disconcerting, given that they had the real numbers for me.”

Perry is far from alone in receiving repeated calls from people threatening to turn off her power if she doesn’t pay a purported outstanding balance over the telephone. WWL-TV also heard from Entergy customers who fell for the scam and declined to be interviewed because of the embarrassment.

One man told WWL-TV about an incident in July, when he was urged by a caller purporting to be from Entergy to send money using a pre-paid cash card called a MoneyPak. The customer didn’t realize MoneyPaks are commonly used by scammers because they are hard to trace and payment can’t be stopped once they are redeemed.

He said he paid $197.50 to keep his lights on, even though he believed he was current on all his Entergy bills. Then he received yet another demand for a $300 MoneyPak the next day. When he questioned it, he was told nobody could research his account on a Saturday. He went to Entergy’s office when it opened on Monday to learn it was all fake.

This type of scam has become so popular that Entergy put out reminders to customers last year saying the utility will never require them to pay bills over the phone or email and will give them time to review delinquencies before cutting off service.

An Entergy spokesperson said the utility has collected a list of customers who have filed complaints about scams, reviewed their online accounts and determined nobody had unauthorized access to their data. But Perry’s experience suggests otherwise, and experts say scammers are finding new ways to access customers’ account information without being detected.

“They can either hack directly into the entity's website and/or get malware installed on your computer,” said Niko Imbraguglio, a consumer protection attorney in New Orleans. “And then they can see whatever you see.”

Perry said the scammers first called her in September, just days after a tenant moved out of her rental property in Gentilly and Perry transferred the electric meter back into her name.

The threat to shut off service came as she was trying to show the unit to prospective tenants. The callers referred to a balance of $85, the exact amount owed by the tenant when she moved out. The callers also referenced a $200 deposit Perry indeed owed for creating a new account under her name.

That was frightening to Perry because she had already called Entergy to complain about the $85 charge, which should have been the responsibility of her tenant. When Perry called the real Entergy phone number, 1-800-ENTERGY, a representative told her to wait for a new bill, which arrived in December with the $85 charge removed and the $200 deposit credited.

But she never figured out how the scammers, who used a different callback number, knew those values too.

“I called 1-800-ENTERGY and they said, ‘Oh, no, ma'am, you can pay once you receive the bill.’ And it was resolved at that moment and that moment I knew it was a scam,” she said.

Perry managed to record multiple conversations with the scammers, providing a rare and detailed look at how they seized on small pieces of information to make Perry think they really could be from Entergy. Somehow armed with the initial amounts of $85 and $200, they badgered her about previous payments she really made by claiming they weren’t “showing up in the system.”

Perry believes they recorded those amounts and based their subsequent requests for payment on that information.

Whenever she called the number left by the scammers, the line picked up with an official-sounding automated message saying, “This is Entergy.” When she asked for a supervisor, she was connected to someone identifying himself as “Sean Murphy” who told her he had spoken with her before and knew her case.

But when Perry challenged them – by pointing out that they had already threatened to shut off her power but didn’t, or by quoting payments she had already made that appeared in her online Entergy account information – they repeatedly hung up on her or yelled at her.

“What are you talking about? I already paid,” Perry retorted.

“Ma’am, goodbye. Goodbye!” the man yelled. “Mrs. Perry, the payments for December and January is not reflecting on your account, ma'am."

“Guess what? I have a 9-cent credit in my account, sir,” Perry said calmly but defiantly.

“All right, goodbye, Mrs. Perry,” the man said before hanging up.

Perry said she would have probably acquiesced and paid if the representatives hadn’t lost their cool. She said she couldn’t help thinking of her 83-year-old mother and all the scam calls she must navigate.

“Someone who has a home dialysis machine or an oxygen machine or, you know, needs some kind of health care subsistence that works via electricity, can really fall victim to this,” Perry said. “And, you know, it's just really, really unfair. These people need to be caught. They need to be prosecuted.”

But that has been easier said than done. Imbraguglio, the consumer protection lawyer, said federal regulators have done little to prevent scammers from registering bogus telephone numbers like the ones given to Perry and the other Entergy customers.

Ultimately, the responsibility falls back on consumers to protect themselves, Imbraguglio said. Entergy has focused on customers’ vigilance, as well, even as the FTC warns of another increase in utility scams in the wake of major winter power outages across the country.

But Sabatini did say Entergy is taking proactive steps to protect customer data and tries to work with victims of scams.

“When a scam is reported to us, our internal Corporate Security department will typically work with scam victims to try and contact the scammer, and with local law enforcement if the customer suffers a monetary loss,” she said. “We encourage customers who are victims of a scam to also contact the Attorney General’s office in their jurisdiction.”

Perry said Entergy, as a monopoly utility, should do more to go after scammers on their customers’ behalf.

“They have the public trust at hand,” she said. “And I believe that Entergy should take it upon itself to really root out and find out who these guys are, where they're getting their information from.”