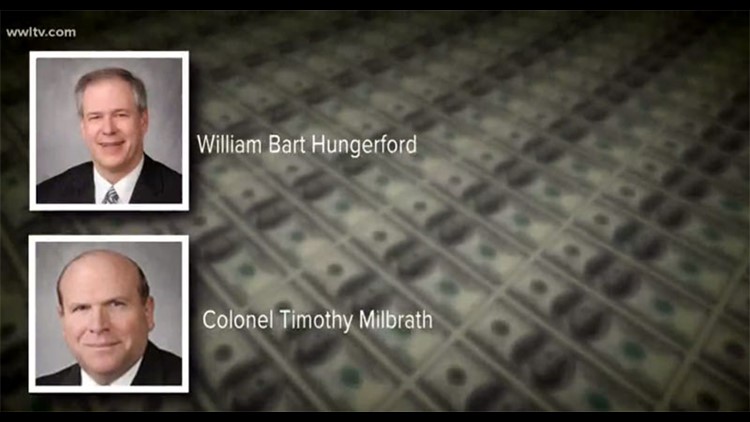 NEW ORLEANS — A dry, document-heavy federal fraud trial took a dramatic turn Tuesday as a former White House aide and his partner testified in their own defense.

True to his reputation as a former military aide to three presidents, Retired Air Force Col. Timothy Milbrath combatively sparred with Assistant U.S. Attorney Andre Legard and emphatically stated that he and his partner William “Bart” Hungerford did not rip off foreign investors to the tune of $15 million.

“I lived by the creed I’ve always lived by, and that the military teaches you, that you do not lie, cheat or steal,” Milbrath said defiantly on the witness stand.

After Hurricane Katrina, the Maryland-based duo got an exclusive deal from former New Orleans Mayor Ray Nagin – who was later convicted of separate corruption and is serving a 10-year stint in federal prison – to run a New Orleans regional center for the U.S. government’s EB-5 visa program.

That program offers full-resident green cards to immigrants who invest at least $500,000 in a certified EB-5 economic development program and can show their money went directly into creating at least 10 new jobs.

Milbrath and Hungerford’s company, NobleOutReach, did raise seed money to help restaurants, such as PJ’s Coffeehouses and Maurepas Foods, hire dozens of employees. But none of them were approved by the U.S. Citizenship and Immigration Services and didn’t count toward any investor’s 10-job goal.

The only federally approved project -- a ValuePlace extended-stay hotel, Algiers Conference Center and Wow! Café and Wingery on Gen. de Gaulle Drive – never got off the ground.

Federal prosecutors allege Milbrath and Hungerford pocketed $9.5 million in salaries for themselves and their wives, created a network of shell companies to hide the investors’ money and failed to deliver a single green card to any of the 31 foreign investors they wooed.

But lead defense attorney Eddie Castaing decided to counter by putting his clients on the stand as the trial entered a third week Tuesday. And Milbrath came out swinging during cross-examination by Legarde.

“I appreciate that my liberty is at stake here, and you’re going to try to trick me,” Milbrath said.

Defense attorney Jacob Weixler argued that Milbrath and Hungerford and their wives were justified in taking $9.455 million from the investment program because they had a right to keep up to $9.575 million. Weixler said management fees paid by the investors, tax distributions and cash loans added by Milbrath and Hungerford, their deferred salary payments and money from three outside capital investors added up to that much.

But prosecutors argued Milbrath and Hungerford charged investors exorbitant fees that were not allowed under the rules of the program and misled investors into thinking that money would all go to the job-creation projects.

Milbrath blamed President Barack Obama’s director of USCIS, Alejandro Mayorkas, for undermining the entire EB-5 visa program and targeting NobleOutReach in particular. Milbrath said he and Hungerford criticized the new management and paid the price for it.

“We’re the only client that tried to get into USCIS to change things and we were retaliated against,” Milbrath said. “They were upset that we had Senator (Mary) Landrieu call Mr. Mayorkas on our behalf. I heard he said, ‘I’ll fix them.’ And he fixed us.”

NobleOutReach had hired the USCIS’ EB-5 program manager, Morrie Berez, as a consultant and depended on him to smooth things over with the USCIS at times. But Milbrath, who bragged that he enjoyed top-secret clearance under three U.S. presidents, said that all changed after Mayorkas took over.

“We wanted to talk to the government to make sure what we supplied to them was what they wanted, but they wouldn’t talk to us,” he said.

Milbrath also relied on his Washington insider reputation to explain why his and Hungerford’s wives were paid a salary by the New Orleans regional center.

On cross-examination, Legarde showed Milbrath invoices that other witnesses had testified were doctored. Milbrath said he had nothing to do with it.

Legarde asked about an email where Hungerford solicited investors by claiming, “We have a fund project portfolio of 31 companies, $37,000,000 of investment dollars and over 6,000 jobs in the works.” Milbrath claimed it was “forward-looking” and not a misrepresentation of the $15.5 million they actually raised from 31 investors.

Legarde also cited testimony last week by immigration lawyer Vaughan de Kirby, who said Milbrath and Hungerford’s regional center was the only one in the country that didn’t produce a single green card. Milbrath cut off the prosecutor and said de Kirby lied about meeting with him in San Francisco.

“I have never been to San Francisco, at least since I was there in the ‘90s with the president (Bill Clinton),” Milbrath said.

But when Legarde asked if he was calling de Kirby a liar, Milbrath shot back, “I didn’t call him a liar. When you tell the truth, it’s your truth. I’m telling my truth right now. But I never met him in San Francisco, and that’s the truth.”

The trial is scheduled to end this week.