The change to thinner beams and columns could be a “smoking gun” in pending criminal investigations into the cause of the collapse. 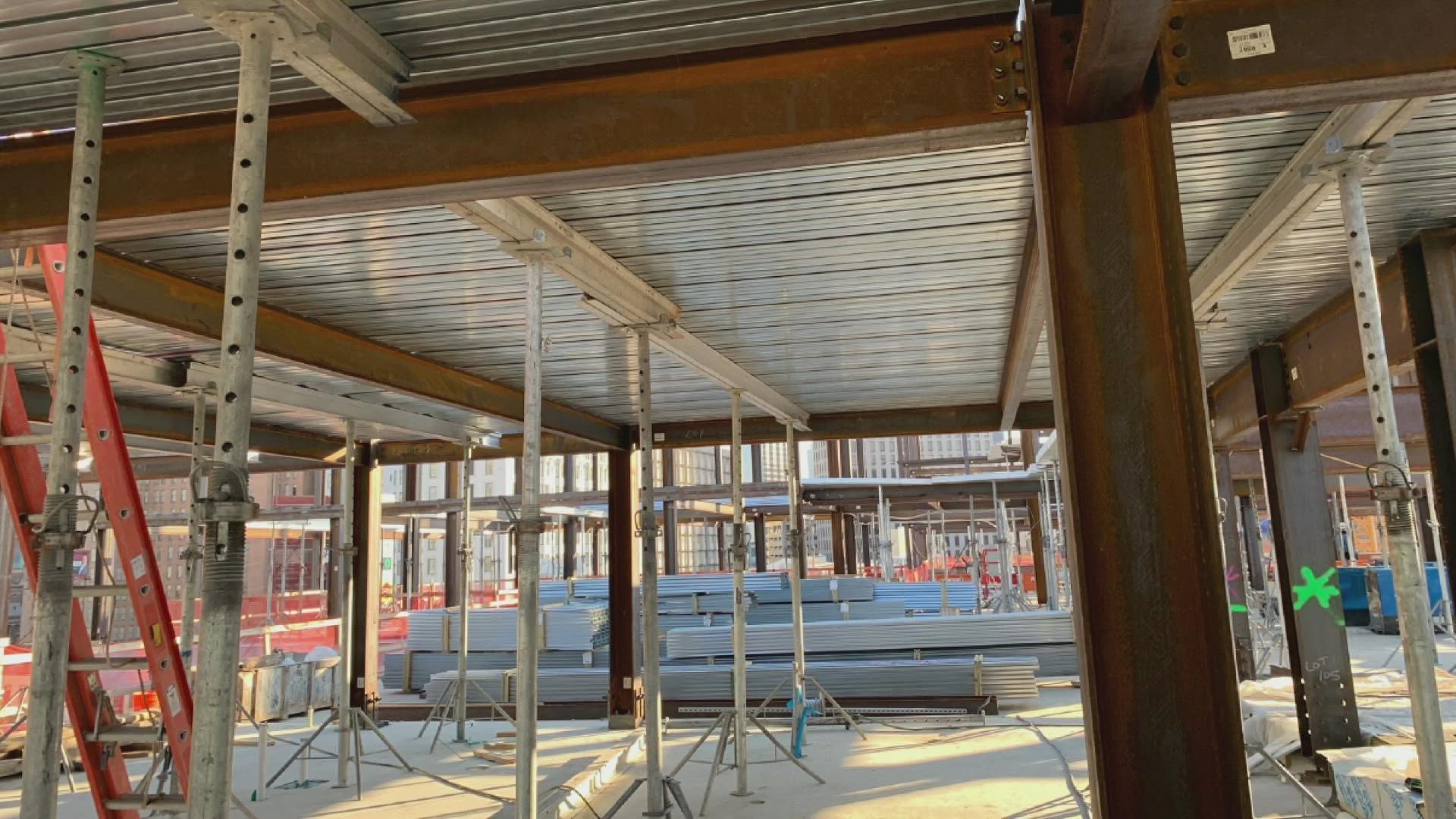 NEW ORLEANS — Steel beams supporting the 16th floor of the ill-fated Hard Rock Hotel project in downtown New Orleans were so “grossly underdesigned” that the deadly collapse of the unfinished building “was waiting to happen,” according to an unreleased OSHA engineering report.

Sources with knowledge of the federal investigation provided WWL-TV with details from an engineering review by the U.S. Occupational Safety and Health Administration that was produced last year but never disclosed, not even to Orleans Parish prosecutors considering possible criminal negligence charges.

Those sources say OSHA’s engineer found that 81 beams on the 16th floor did not meet the basic design code to properly support the upper three floors of the structure, the sources said, raising questions about how the design was approved.

Allegations that undersized steel beams contributed to the building’s failure on Oct. 12, 2019, are not new. But WWL-TV has discovered new details about why some beam and column sizes were reduced, and to what extent, by sifting through thousands of construction documents collected in civil lawsuits stemming from the collapse.

The documents show the owner of the project wanted a 205-foot building with lofty penthouse ceilings, a pool deck and a rooftop bar, but the changes he ordered in March 2018 would have exceeded the city’s 190-foot height restriction.

So, the design team got creative. Rather than seek another variance to raise the roof by 15 feet, internal project documents show the designers kept a 190-foot building and made room for higher ceilings by reducing the size of steel beams supporting the 17th and 18th floors.

Independent engineers who reviewed blueprints and other construction documents for WWL-TV said the 2018 changes to the structural steel of the building could have contributed to its collapse, which crushed three workers to death and injured several others.

Michael Bradbury, a structural engineer who has designed steel buildings and reviewed high-rise projects for the cities of Denver and Austin, called the change to thinner beams and columns a “very significant discovery” that could be a “smoking gun” in pending criminal investigations.

“It tells me that they were trying to keep within the basic structure and trying to use much shallower beams and much smaller columns to keep within that height,” Bradbury said. “Nobody checked to see whether or not the beams they put in took the (bending force) from the deck on those upper floors, which I believe would have … been one of the causes of the collapse because they overloaded the structure.”

By using thinner steel beams buttressing the floor above, the ceilings could be raised, allowing for more headroom below.

Blueprints from early 2018 called for 21-inch-thick beams. But after the owner directed modifications to the ceiling heights, the floor plans on the 16th and 17th floors changed to show 10-inch-thick beams, allowing an extra 11 inches of ceiling clearance.

Walter Zehner, a local structural engineer hired by the owner, 1031 Canal Development, said the changes to the size of beams under the 17th and 18th floors did not cause the collapse. He said the beams under the 16th floor did, and they were three times too small all along.

“The beams on the 16th floor were the same size as the ones on all the floors below,” he said. “It was carrying its own floor, plus the two additional floors above and the roof. So, they were like 300% overstressed, based on my calculations.”

The design team planned to offset the impact of thinner beams by adding more steel columns, according to notes on construction documents from the spring of 2018. But plans dated Oct. 11, 2019 -- the last blueprints the construction team had distributed before the building collapsed the next day -- only called for one additional column along the Rampart Street edge on the top floors.

That gave them 12 columns there, instead of 11. Bradbury said he was “shocked to see how few columns they added,” given that his load calculations showed they would have needed at least 24 columns of that size to properly support the floors above.

And like the beams running horizontally under the floors, the columns also ended up significantly smaller than what was in the original plans. All 12 of the columns installed along the Rampart Street edge that collapsed were W6x20s – meaning they were 6 inches wide with a weight of 20 pounds per foot. By contrast, the 11 columns shown in the original plans were all W10x49s -- 10 inches wide and 49 pounds per foot.

Bradbury calculated the W6X20 columns installed at the Hard Rock site had one-eighth the stiffness of the columns originally proposed.

Construction crews poured the last heavy concrete floor on top of those columns on Oct. 5, 2019. A worker took video of temporary shoring poles buckling under those floors on Oct. 10. And two days after that, those floors pancaked.

The collapse began at the end of a curved balcony along Rampart Street, just in front of a tower crane some 75 feet from the corner of Rampart and Iberville streets. That northwest corner of the building caved in first, before the concrete and steel cascaded back to the southwest corner at Rampart and Canal.

Bradbury said the owner requested certain changes and may have applied pressure to get the project done without further delays. But he said the responsibility for doing so safely ultimately lies with the engineer of record who approved the changes.

“The engineer has to be held accountable in this case because the contractor builds what's on the approved plans or on the RFI (a document where contractors can request and receive information). They're not engineers,” he said. “That's what he's responsible for, the engineer, is to make sure it doesn't fall down.”

OSHA has already issued violations against the engineer of record, Heaslip Engineering, and the steel contractor, Hub Steel.

The citations OSHA issued against Heaslip include a “serious violation” that alleges "floor beams on the 16th floor were under-designed" for the loads they would need to support. They also include a “willful violation” alleging “structural steel connections were inadequately designed, reviewed or approved, affecting the structural integrity of the connections.”

The latter violation stated the engineer should “ensure the number and size of bolts for the connection is designed to meet or exceed the anticipated loads.”

Sources with knowledge of the OSHA investigation said the agency’s engineer found some holes for heavy bolts to connect beams and columns didn’t match up, so crews welded them instead.

Some of the photos obtained by WWL-TV also show handwritten notes on the plans at the construction site that indicate some of the prefabricated steel beams were shorter than what the plans called for.

OSHA issued a separate violation against Hub Steel alleging "steel beams on the 16th floor were not connected to columns on the 15th floor" in accordance with the code and "did not meet the specified load requirements."

Heaslip and Hub Steel are both contesting the violations.

Orleans Parish District Attorney Jason Williams says he wants OSHA's full report, so he can file possible criminal charges against those who caused the collapse. But OSHA has declined to release that report, even to Williams’ prosecutors, until all appeals in the case have been heard.

An attorney for the developer, 1031 Canal Development, defended the aesthetic changes lead partner Mohan Kailas directed in 2018 and placed the blame for the structural failure squarely on Heaslip and Hub Steel.

“Like any developer on a project, the owner requested that certain aesthetic changes be made,” attorney Paul Thibodeaux said in a statement to WWL-TV. “Those aesthetic changes did not cause the building to collapse. At all times, ownership relied on experienced professionals, including Heaslip Engineering and Hub Steel, to determine the means and methods to safely construct the building, including specifying the size and type of all beams, columns and connections.”

Thibodeaux said OSHA has never implicated the owner in any of the structural failures, and sources with knowledge of the investigation confirmed to WWL-TV that OSHA has not found Kailas was responsible.

“At no point did Heaslip, Hub Steel or anyone else raise to ownership any concerns regarding the building’s structural integrity,” Thibodeaux added.

In response to specific questions about the structural steel changes his firm approved, James Heaslip sent WWL-TV the same statement he has previously sent.

"We have denied and are contesting all allegations of fault and negligence asserted in the legal proceedings related to the Hard Rock Hotel collapse, and we stand behind our company's track record of designing projects that meet applicable engineering standards,” Heaslip said.

Hub Steel officials and the company’s attorney did not respond to requests for comment.