Is S&WB ready for Nicholas? Neighbors that flooded during Ida brace for more

“I do think the Sewerage and Water Board is taking a victory lap. Not everybody experienced victory." 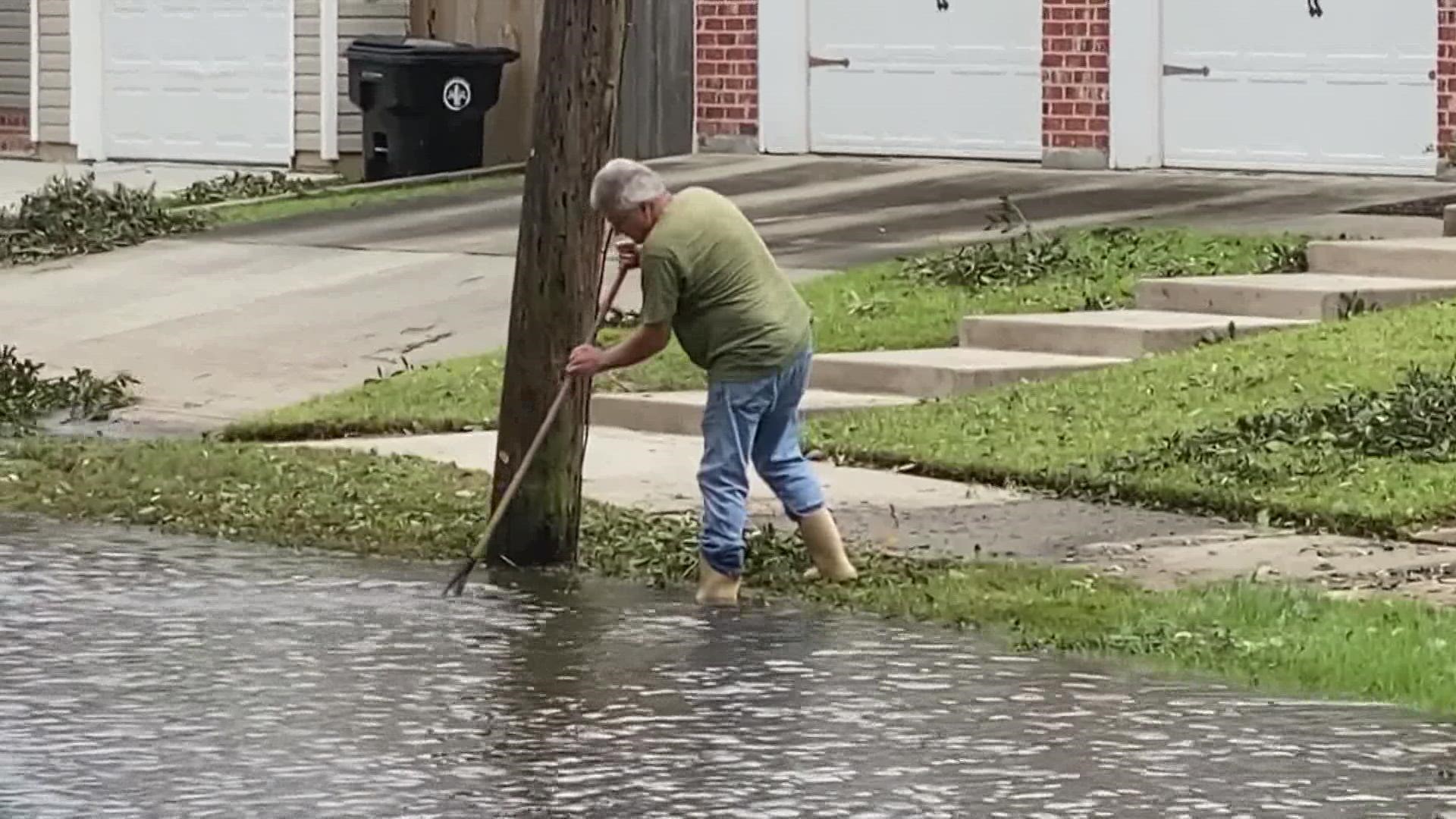 NEW ORLEANS — Tully Casbon doesn’t mind giving the Sewerage and Water Board credit for keeping most of the city of New Orleans dry during Hurricane Ida.

But after two weeks of back-breaking work tearing out wet drywall and throwing out furniture from his Lakeview home, Casbon wants the powers-that-be to know that not all is well with the drainage system – especially as the outer bands of Tropical Storm Nicholas threaten to dump excessive rain on the city.

“I do think the Sewerage and Water Board is taking a victory lap. Not everybody experienced victory,” Casbon said. “We have some folks -- and it's not just my situation -- there are other folks in this area that took on water and it needs to be addressed.”

The water got so high in Casbon’s neighborhood near Mount Carmel Academy that it flowed into his car, which was parked high on the neutral ground.

Drainage Pump Station 12 in West End is supposed to pump the water out of that area, but its single pump was not working during Hurricane Ida. Now, the question is, would it have helped if it had been working?

City Councilman Joe Giarrusso lives nearby and says he’s not so sure. That’s because he saw the same area flood in May 2019 when the pump at Pump Station 12 was working properly.

“Other parts of Lakeview were high and dry (in Ida, which) suggests that there's something at the front end of the system that is causing the problem as opposed to the back end,” Giarrusso said. “But we want to make sure that's right and we're investigating everything possible to determine the cause.”

Get the latest forecast for Tropical Storm Nicholas here.

Sewerage & Water Board Executive Director Ghassan Korban said the pumps at Pump Stations 6 and 7, which sit on either end of Lakeview along the 17th Street Canal and the Orleans Avenue Canal, should have been able to drain the area even without Pump Station 12 operating.

Sewerage & Water Board staff is analyzing the drainage lines in the area and using computer models to try to determine if there are blockages, Korban said.

Even with sufficient power to run 95 of 99 working drainage pumps, a big rainmaker could lead to more flooding in Lakeview or in Hollygrove, where slab-on-grade homes also suffered from flood damage during Hurricane Ida.

Another area of concern is New Orleans East. Many of the drainage canals there are overgrown with vegetation, and Korban said there is not time to clear them ahead of the rain expected from Nicholas.

One of four drainage pumps at Pump Station 14, near Bullard Avenue at Lake Pontchartrain, was out before Ida and still isn’t working. Pump Stations 15 and 18, which drain the neighborhoods off Michoud Boulevard and Chef Menteur Highway, had some equipment failures during Ida, but those have been fixed, Korban said.

“We certainly have more equipment on hand, such as backup power generators or bypass pumps that we did not have as many before Ida,” Korban said.

That includes 20 backup generators in position to help at some of the 84 sewer lift stations, all of which lost Entergy power during Ida. With only five generators available for the sewer pumps during Ida, vacuum trucks had to suck raw sewage out of clogged lines.

Korban had to make the difficult decision to divert sewage into the Mississippi River and Bayou Bienvenue to prevent backups in homes and businesses in the days after Ida.

Entergy provided additional generators for the sewer stations after Ida, at the Sewerage & Water Board’s expense.

Korban said backup generators have also been restored at the sewage treatment plant in the Lower 9th Ward, which flooded during Ida.

“Between bypass pumps, between generators and vac trucks that we can bring back, hopefully we will be able to keep up with the flow,” Korban said.

The Sewerage and Water Board, Entergy and the city’s Department of Public Works each have a role to play in the system. For Casbon, it’s not about assigning blame but about fixing the problems as soon as possible.

“We’re trying to just move forward and get answers from our leaders to assure us that as best as they can control that this won't happen again,” he said.