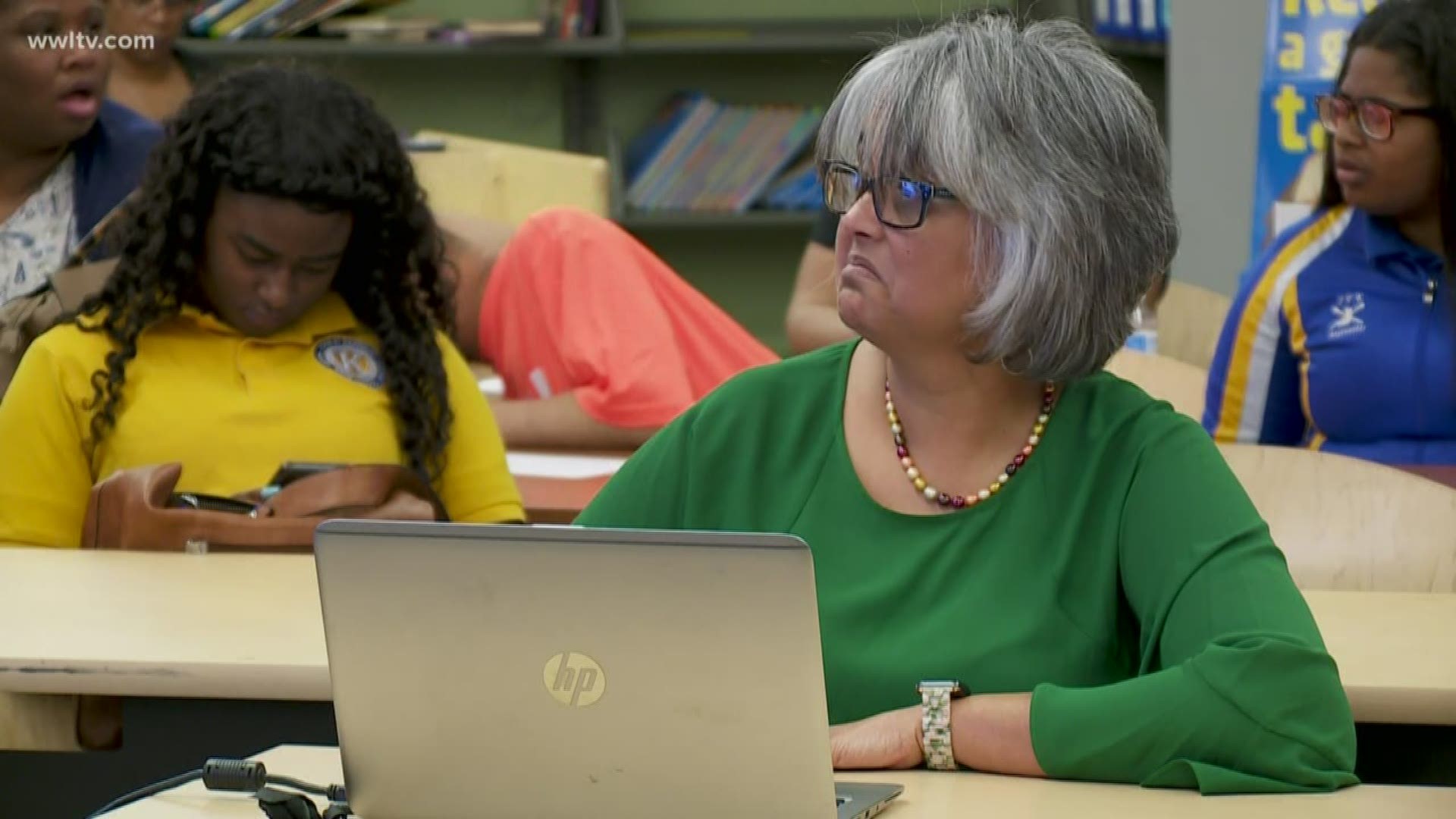 The public board of directors that oversees New Beginnings’ three charter schools engaged attorneys from Adams & Reese to investigate allegations, first uncovered by WWL-TV last week, that Blouin-Williams may have created fake board minutes to make it look like a major school bus contract had received board approval.

Attorneys Jaimme Collins and Lee Reid will also be looking into allegations, first reported by The Lens two weeks ago, that New Beginnings officials used an expired computer login to manually raise the grades of Kennedy High School students from F’s to D’s and D’s to C’s, altering what they had received from a teacher who no longer worked at the school.

Blouin-Williams was suspended Monday, with pay, until the investigation is complete.

But sources who used to work at New Beginnings and had direct knowledge of Blouin-Williams work say that’s not all.

WWL-TV already questioned Blouin-Williams about the Scholars First school bus contract she signed Aug. 1, 2017. Public records posted on the New Beginnings website and provided to WWL-TV in response to an official request purport that “proposed” contract was brought to the board on Sept. 21, 2017, almost two months after Blouin-Williams and Scholars First owner Jeramy Jackson signed it.

Metadata in the records posted online and provided by Blouin-Williams show they were created in August 2018, a year afterwards. They also purport the board approved that contract at its Sept. 21, 2017 meeting, even though records dated in 2017, including the original audio recording of the meeting, show no such vote took place.

A source said Blouin-Williams created the fake board minutes in August 2018 because a required annual audit for the Louisiana Legislative Auditor was beginning, and the organization needed to show major contracts were approved by the board.

And while that was happening, Blouin-Williams’ contracting practices were questioned. Three local bus vendors bid for the contract that went to Scholars First, a company now under investigation for fraud after WWL-TV discovered it was allegedly falsifying its insurance coverage.

Scholars First bid to charge New Beginnings $275 per bus per day, and $80 more for each bus monitor – a person who watches the students while the driver is driving. A competing bid from Wells Transportation would have charged $25 more per bus per day for the base rate, but offered to charge nothing extra for bus monitors – essentially a $55 savings per day on buses with monitors.

But when Blouin-Williams signed the contract with Scholars First, it ended up charging $105 per bus monitor per day, not $80, essentially negating the $25 savings on the standard bus rate.

Sources who used to work for Blouin-Williams spoke to WWL-TV on condition of anonymity and said New Beginnings did receive background checks “for every Scholars First bus driver.”

“I can’t attest to what might have happened to the documents, but they did receive them,” one employee said. “They were required.”

That ex-employee also alleges that while the charter organization was blowing through its cash, Blouin-Williams hired a consultant, Tinashe Blanchet, and agreed to pay her almost $100,000 for part-time technology training focusing on Google Classroom and other online teaching tools.

“Because there were issues about certain contracts being presented to the board, I believe that it was broken up intentionally, to defeat the threshold,” the ex-employee said.

Asked if she split the contracts to avoid board review, Blouin-Williams declined comment. Blanchet did not respond to phone and email messages Thursday or Friday.

On Friday, New Beginnings attorney Michelle Craig turned over some of the Blanchet contracts, invoices and payments WWL-TV had requested March 26. The records Craig turned over only included one contract with Blanchet from January 2018 to pay her $62,500 over five months for about 25 hours per week of technology training. But Blanchet’s invoices from 2017 also refer to another contract she had with New Beginnings dated Aug. 25, 2017.

The invoice says that 2017 contract was for $25,000, also for Google Classroom support and training.

Records show New Beginnings ended up paying Blanchet only $55,000 of the $62,500 contract. Sources say the final payment was prorated and Blanchet’s services stopped early in May 2018 because of cash-flow problems.