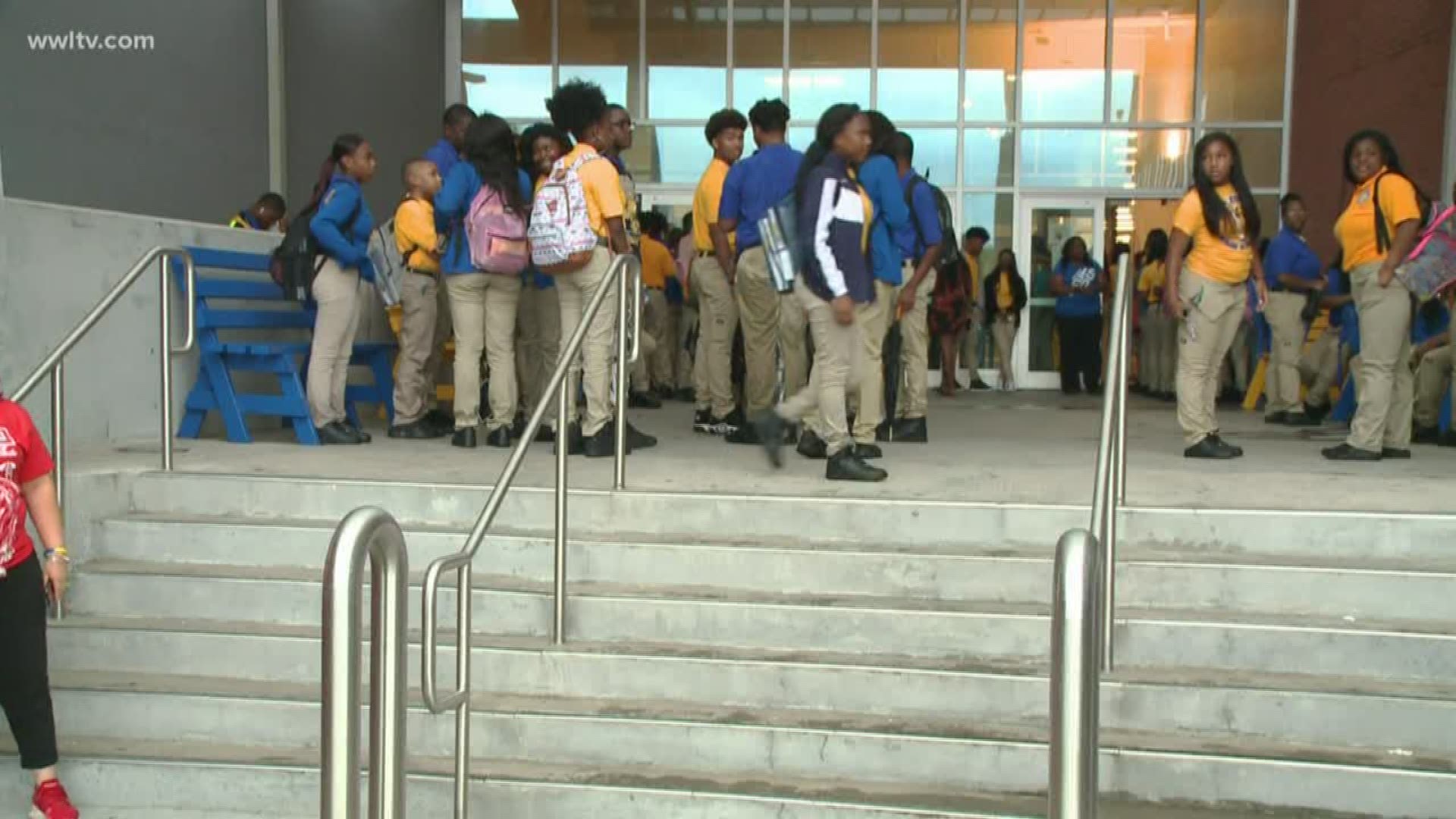 NEW ORLEANS — The new leadership at Kennedy High School wanted the first day of the 2019-2020 school year to be a celebration.

But there was no sugar-coating what happened at Kennedy and its parent charter school network, New Beginnings Schools Foundation, during the 2018-19 year.

“There's been a dark cloud hanging over Kennedy High School and New Beginnings for quite some time and we wanted to lift that cloud,” new New Beginnings Schools CEO Kevin George said as he waited for the school buses to arrive Monday morning.

In March, WWL-TV's investigation and a report by the website The Lens exposed grade-fixing. More WWL-TV reports exposed possible criminal changes to public records and other misconduct at New Beginnings.

George was brought in from St. John Parish to replace Blouin-Williams, who immediately landed a new job as a math teacher at East Jefferson High School.

The New Beginnings charter board voted to forfeit the charters at both Kennedy and Pierre A. Capdau after this school year, meaning the new leadership at New Beginnings only have jobs through next summer. But George said he relished the challenge.

He turned to people he trusts to right the ship, he said. He hired his fraternity brother, Harold Clay, to be Kennedy's new principal. Clay is a former homicide investigator for district attorneys in New Orleans and Atlanta and has run programs for at-risk kids in several charter schools.

“We recognize that a grave injustice has happened, but we're here about fixing, the business of fixing so they can be successful in life,” Clay said. “I can tell you what's different this year is that we're student-focused, we're student-centered and, for me, the expectation is we arrive every day ready to work for students. That's the bottom line.”

And then there are the Kennedy alumni, who came in Monday morning to support a new crop of students.

They waited 13 years after Hurricane Katrina destroyed their school on the edge of City Park to get the JFK name used again. New Beginnings agreed to use the Kennedy name at Lake Area New Tech Early College High School, and within a year, it became synonymous with scandal.

“They need to start all over and figure out whose hands have been in the cookie jar,” said Faye Thomas-Bertrand, who graduated from the original Kennedy High in 1984.

The lawsuit claims damages for about half of Kennedy's Class of 2019, nearly half of whom walked in graduation ceremonies in May and then found out they didn't qualify for diplomas, mostly due to negligence or misconduct by school officials.

Eighty-seven of the 177 seniors were not able to graduate. Fifty-three of them were able to re-take and complete their classes in summer school, but are still waiting on diplomas and transcripts. About 20 must re-take their entire senior year.

New Beginnings and the state Department of Education say they are working as fast as they can to certify diplomas and transcripts for those who have completed their coursework. An emergency hearing is scheduled for Tuesday as the plaintiffs seek a court order forcing the school and state to turn over those records immediately.

New Beginnings board chairman Raphael Gang had promised to release the results of the Adams & Reese investigation, but last month responded to a WWL-TV public records request by stating that law enforcement agencies asked that the report not be released. WWL-TV is challenging that as an invalid reason to withhold public records under state law.