Millions spent on sickening smell in Jefferson Parish, but little has changed

With more than $6 million spent and charges for "unforeseen work," critics are calling for an audit of repairs and upgrades to the parish landfill. 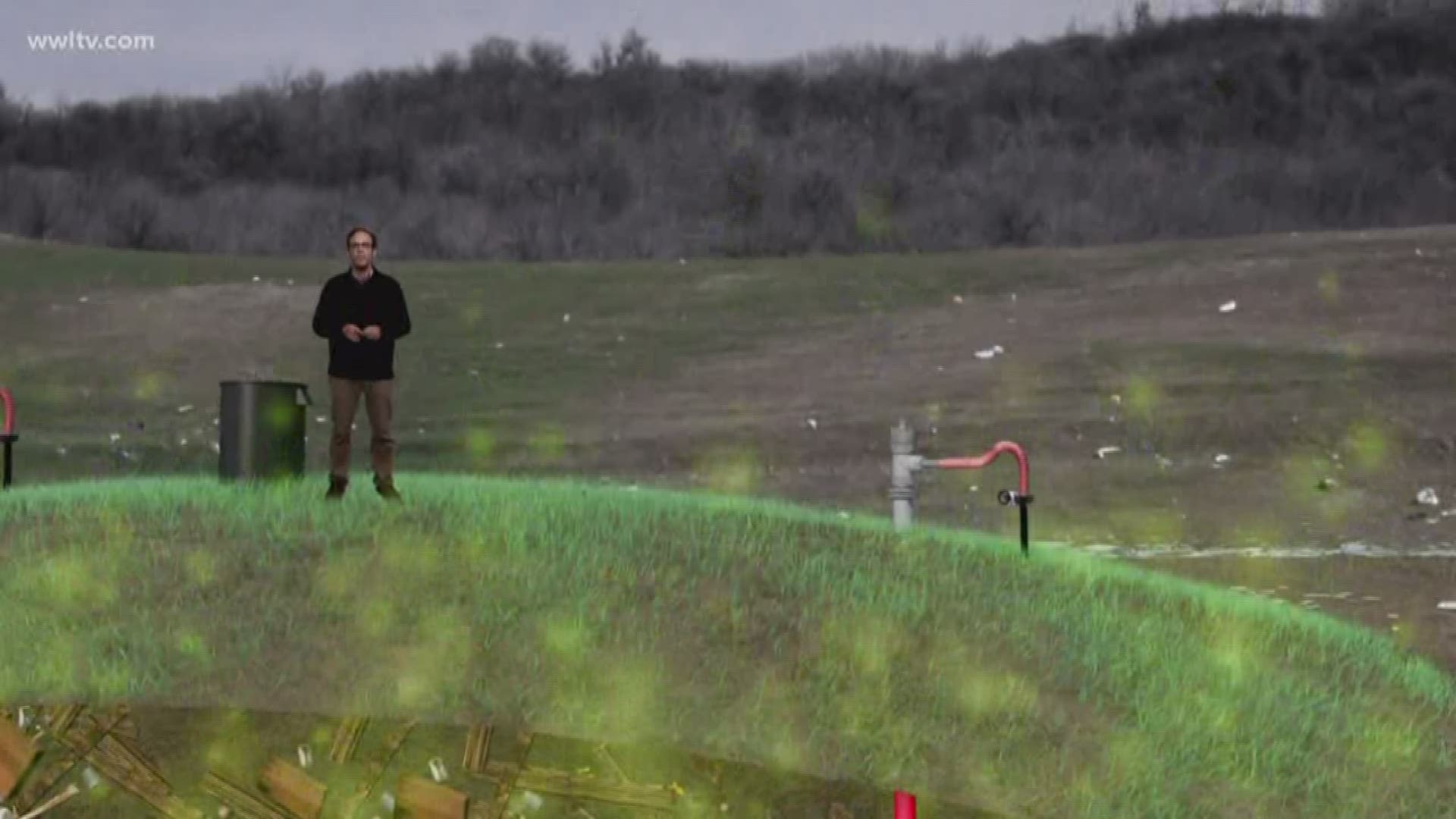 This is part two of David Hammer's two-part "Stench of Failure" investigation into the sickening smell invading Jefferson Parish homes. Click here to read part one.

Jefferson Parish has spent at least $6 million in 15 months trying to fix the malfunctioning gas collection system at the parish-owned landfill in Waggaman, but reports by consultants and a review of contractors’ invoices raise serious questions about whether that work has paid off.

Last week, work began on another $5 million contract, won by a competing, private landfill owner, to redo some of the repairs and to construct a new gas collection system in the parish landfill’s newest sections.

That work is expected to take at least another year. In the meantime, parish consultants warned the odors from hydrogen sulfide emissions are likely to get worse before they get better – toxic releases that many believe have contributed to headaches, nosebleeds and eye and skin reactions in neighborhoods as far away as Harahan.

Hundreds of invoices obtained through public-records requests and reviewed by WWL-TV show charges from more than a dozen contractors and subcontractors starting in July 2018 as the parish sought to fix the failed landfill gas and leachate collection systems. The charges total more than $7.7 million, but it’s unclear on some of the invoices when the work is for existing maintenance and operations and when it’s for repairs and upgrades.

Former Parish President John Young, who recently came up short in a bid to reclaim his old office, is calling for a state audit of the whole effort.

“A legislative audit needs to be done to see what money was spent and why it hasn't resolved the issue, because that's a lot of money, taxpayer money,” Young said.

Parish Environmental Affairs Director Mike Lockwood said in an email that $6 million of the total had been spent on repairs and upgrades, as of Oct. 31.

But the quality of repairs has been questionable – for instance, when trying to fix the landfill’s leachate collection system.

Leachate is the water and other liquids that seep to the bottom of a landfill. If it reaches levels of 5 feet or more, it can block proper collection of landfill gases. Pumps and pipes are supposed to remove the leachate and keep it to about 1 foot at the bottom of the landfill.

The following video demonstrates how leachate and gases are removed from a landfill:

In November 2018, an inspector from the state Department of Environmental Quality found a leaking leachate pipe. When he came back less than two weeks later, it had been patched with duct tape and was still leaking, according to DEQ records.

Carlson identified an important, newly installed 10-inch pipe that couldn’t function because it was never connected. His report said the configuration of leachate collection pipes “creates a risk of fire or explosion.” And he found high levels of methane and hydrogen sulfide gas still leaking from cracks in the ground, nine months after recommending that heavy clay be used to patch those leaks.

PART 1: A sickening smell is invading Jefferson Parish. But what is to blame?

This month, Carlson reported that gas flow inside the collection pipes has increased by 45 percent since May, showing some important strides have been made. But leachate flooding continues to be a problem, with a state DEQ inspection in October finding nearly as many wells flooded with more than 5 feet of leachate as Carlson found in May.

“De-watering gas wells is a continual process and a time-consuming process,” DeCastro wrote. “It took more than a decade for clogged wells to become this extreme, and it will take time to rectify the situation.”

Adding to concerns about repair costs, some contractors were not very clear about the basis for some significant charges to Jefferson Parish taxpayers. Invoices from Kenner-based BLD Services for pipe repair work and from Baton Rouge-based PPM Consulting for “oversight and technical assistance” list hundreds of thousands of dollars for "unforeseen work" or "unexpected tasks.”

DeCastro noted that PPM did itemize its “unexpected” work and said the “vast majority … (was) mandated by LDEQ.”

PPM charged the parish nearly $78,000 over six months, at $113 an hour, for the services of former Tangipahoa Landfill manager Terrance Stewart. Much of the time marked on Stewart’s timesheets was for meetings and reviewing odor complaints. Taxpayers were charged thousands of dollars for Stewart’s travel time and mileage, including for travel to and from his home in Amite, which is about 75 miles from Waggaman.

That whole time, Stewart was serving three years’ probation for felony theft and malfeasance, after pleading guilty to pocketing about $70,000 in dumping and scrap metal fees that should have gone to the Tangipahoa Parish landfill.

That angered Harahan resident Gerald Herbert, who has been gathering thousands of complaints about odors and health problems from his neighbors and pushing the parish to fix the problems.

“Anyone who's taking cash under the table for ... dumping at a landfill should never be working at a landfill again,” Herbert said. “And secondly (he) should not be thrown into this job, (with) the state this community's in, and the disaster that's going on over there.”

Asked about Stewart’s work on the project, the Yenni administration said simply: “We have learned that Stewart is an employee of PPM who performed support services but is not part of PPM’s leadership team.”

Reached by phone, Stewart said he’s still working for PPM on other projects and trying to pay his debt to society.

“I just go and do what they ask me to do and turn in my expenses,” Stewart said. “I’ve been in the solid waste business for over 23 years. Whatever happened (in Tangipahoa) happened, but I have a family and need to make a living.”

WWL-TV requested an interview with the Yenni administration, but it only responded by email.

“The Yenni administration has invested upwards of $7 million to bring the landfill into top working condition so that the (Cynthia) Lee Sheng administration will inherit a landfill that is fully operational,” DeCastro wrote.

Parish President-Elect Cynthia Lee Sheng, who takes office in January, did speak with WWL-TV about her expectations. She said she wasn’t aware of the concerns about some of the charges or if repairs were made incorrectly.

“I would need an engineer sitting next to me saying, ‘This should have been done with this size pipe and not this size pipe.’ If you’re not in the landfill business, it’s hard to say what an accurate cost should be,” she said. “You feel helpless as an elected official, because you have constituents coming to you saying, ‘I’m not able to enjoy my own quality of life in my own home.’”

But she praised Yenni for owning up to the problems and trying to fix them.

“We know in our own house that we have issues, that we need to get better and to solve and remediate,” Lee Sheng said. “And (the Yenni administration) focused on that and I can appreciate that and support that effort, and when I get to be parish president in January, I also believe the same thing.”

To that end, River Birch, the private company running two landfills next door, has started on a $5 million construction project drilling 64 gas wells and installing 10 miles of new piping at the parish landfill.

“The goal is to maximize the collection, which in turn minimizes the emissions,” River Birch’s Brian DeJean said.

River Birch runs a state-of-the-art gas plant. It's considered a high-BTU plant because it produces almost pure methane. That's sold to the nearby Atmos Energy pipeline as renewable natural gas, for delivery to homes across the country.

By contrast, Jefferson Parish landfill had been operating a medium-BTU plant that could only produce 50 percent methane. DeJean said the gas was so impure that a local chemical plant stopped buying it altogether.

In the past, River Birch's owners were investigated for allegedly pressuring public officials to close public landfills so they could corner the market.

“It's clear that they run a better site than we do, so they certainly have the expertise in this, and they were the top-ranked firm on that,” she said.

Residents say they don't care about River Birch benefiting, as long as it fixes the problem.

WWL-TV investigator David Hammer can be reached at dhammer@wwltv.com;