“Go into your gradebook and find any assignments where more than 33% of students got a D/F. Give those assignments a weight of zero." 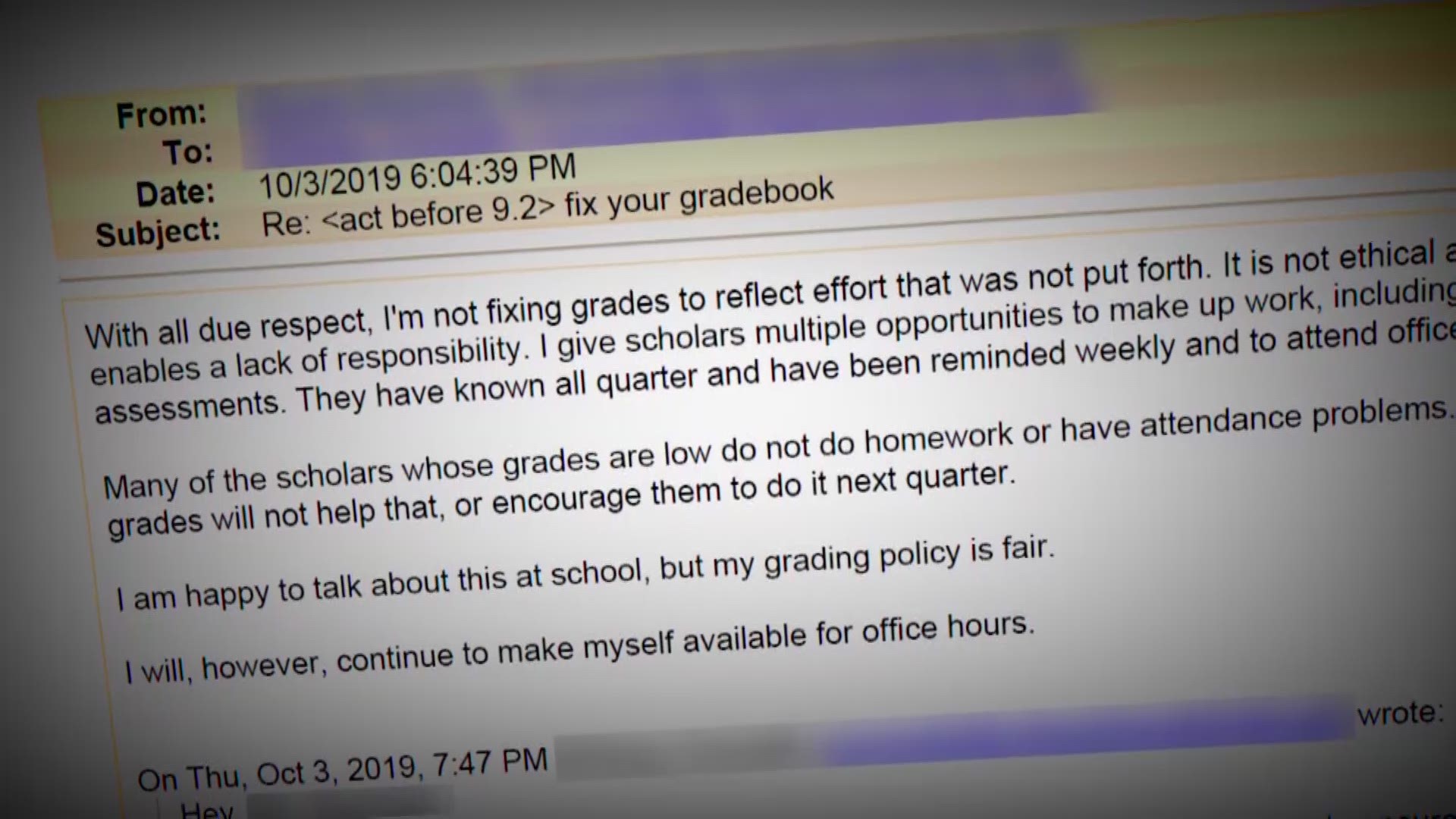 NEW ORLEANS — In the wake of grade-fixing scandals at other New Orleans charter schools, the subject line on a batch of emails sent this month to Abramson Sci Academy teachers is shocking:

“Fix Your Gradebook,” it says.

Whitney Omosefe, an assistant principal at the Collegiate Academies-run charter school, sent almost identical emails to 27 teachers Oct. 3, warning them that the first quarter of the school year was about to end and they needed to act quickly to raise their students’ grade averages.

“There’s not much time left to improve our course averages and while we don’t want to ‘cook the books,’ we do want to ensure that students don’t have limited college access as a result of our ongoing learning around grading best practices," the email reads.

WWL-TV showed the emails to Ashonta Wyatt, who was fired as principal at Edgar P. Harney Charter School after reporting financial improprieties there and ran unsuccessfully for the state Board of Elementary and Secondary Education on an anti-charter school platform.

“This is a roadmap to grade-fixing, so I’m not certain why she would preface it with ‘I don’t want you to cook the books’ because that’s exactly what’s happening,” Wyatt said. “Grades are being manufactured, i.e., ‘cooking the books.’”

Her concern is reminiscent of a complaint filed by Runell King, the former data director for New Beginnings charter schools, when he said he saw officials going into gradebooks at Kennedy High School and manually raising low grades without the teacher’s knowledge.

King was fired for making a claim that he couldn’t support, but WWL-TV received documents that appeared to back up King’s allegations. After they were reported by The Lens and WWL-TV, New Beginnings and New Orleans Public Schools launched new investigations and found grade-fixing and other grading issues that invalidated transcripts for half the graduating class.

The Kennedy grade-changes were initially chalked up as a problem with “weighting” – assigning values to certain grades over others. That was also part of Omosefe’s directive to teachers at Sci Academy.

After writing that they “don’t want to ‘cook the books,’” Omosefe went on to write, “Here’s what you need to do for those sections with low averages…” and lays out ways teachers can apply weights – values of 0 to 4 -- to different assignments to emphasize the ones where kids did better and negate the impact of ones where a lot of students failed.

“Go into your gradebook and find any assignments where more than 33% of students got a D/F. Give those assignments a weight of zero. They will still appear in the gradebook but they will not hurt students’ grades,” the email says.

Then Omosefe goes on to say it’s the teacher’s fault if a large number of students failed on an assignment.

“The rationale for this move is that if a third of your students were unsuccessful on an assignment, then you did not teach them the content, study skills, or mindsets they needed for success on that assignment,” the email says. “It’s too late to fix that teaching error now, so we can make up for it by giving those assignments a weight of zero.”

Asked if it is appropriate to change the weight of an assignment at the end of the quarter based on how well or poorly the students did, New Orleans Public Schools Superintendent Henderson Lewis said that’s not the way it’s supposed to work.

“Our expectations are very, very clear: That we give expectations to our students and our families on the front end,” he said.

Some Sci Academy teachers took exception to Omosefe’s email. One History teacher replied less than 20 minutes after the original email with this:

“With all due respect, I’m not fixing grades to reflect effort that was not put forth. It is not ethical and it enables a lack of responsibility.”

She added: “Many of the scholars whose grades are low do not do homework or have attendance problems. Fixing grades will not help that or encourage them to do it next quarter. I am happy to talk about this at school, but my grading policy is fair.”

After receiving that teacher’s email along with a dozen other teacher replies, WWL-TV called the teacher who protested. She declined to comment.

Other teachers also expressed concern, but didn’t challenge the directive as definitively as the History teacher.

Wyatt said more teachers need to stand up against such directives, but given her experience at Harney, she understands why charter school teachers, who are at-will employees and don’t have any union or civil service protections, are afraid to speak out.

“She said, ‘I’m happy to talk about this at school but my grading policy is fair.’ I agree. I agree with her. And I commend her because not many teachers will take a stand in an at-will environment. Because directly after this email she could have been unemployed,” Wyatt said.

Sci Academy’s principal, Rhonda Dale, responded to WWL-TV’s request for the emails by sending an email to all teachers clarifying the school’s grading policies. It walked back a lot of what Omosefe said, emphasizing that the “gradebook goal” of specific percentages for each letter grade was “an exemplar” and “should not be interpreted as a mandate….”

It also said, “You have every right and obligation as a teacher to assign the grades that students are earning.” Dale concluded by saying, “We do not win on our mission by ‘giving’ students grades that they have not earned, and no one on this team wants that to happen.”

“What I saw in the email was unacceptable,” Lewis said. “Our schools, as you look at Abramson Sci Academy, they have a grading policy. It’s very simple to refer the teachers to the grading policy that’s in writing for them to make sure that’s actually how they’re giving grades to their students. And what I mean by ‘giving grades’ is the grades our students earn.”

But he said he doesn’t believe this is a widespread problem at Sci Academy or elsewhere. He said he was informed by the school that Dale did not know about Omosefe’s emails until WWL-TV asked for them.

“It’s my understanding that those emails didn’t go to the principal until after the fact, so as a principal she did the right thing to communicate directly with her staff and remind them of the expectation.”

After WWL-TV requested the emails from Sci Academy, Principal Rhonda Dale said the school “does not give grades that students have not earned.”

She said Omosefe’s email “did not use the best choice of words” but was intended to “ensure grades for all students are fair.”

Dale also sent a new email to all teachers, saying the gradebook goal of 25 percent A’s, 40 percent B’s, 25 percent C’s and less than 10 percent D’s or F’s “is an exemplar” and “should not be interpreted as a mandate.”

“You have every right and obligation as a teacher to assign the grades that the students are earning,” Dale wrote.

Lewis said teachers should not be afraid to report issues like this through an anonymous tip line the school district offers.