The Gulfport police investigated but no charges were filed. No civil case was ever filed either. Sanders professed his innocence to reporter Bruce Nolan in a Times-Picayune article in 2005, and questioned the church's disciplinary process. 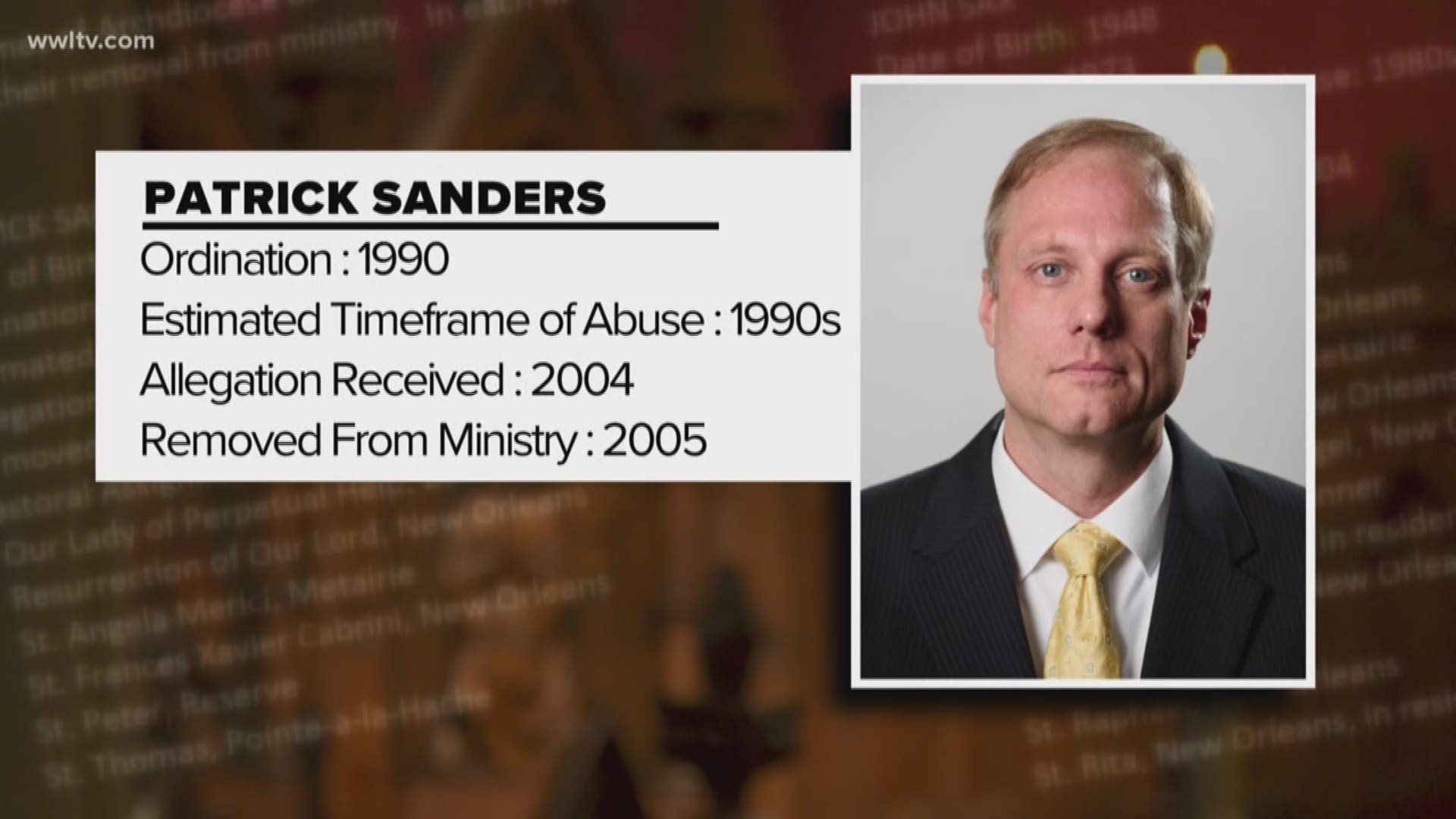 The Archdiocese’s new list of priests removed from ministry as a result of sex abuse against a minor includes a man whose defrocking 13 years ago was hotly contested.

The Rev. Patrick Sanders has since become a successful personal injury lawyer in Algiers. He’s managing partner of the law firm Sanders & Ford. When WWL-TV went to his house to ask him for comment about his appearance on the official list Friday, he slammed the door before the reporter could finish identifying himself.

He did not respond to multiple phone messages.

Sanders became a priest in 1990 and was accused of sexually abusing two 16-year-olds on a church trip to Gulfport, Miss., in 1993. The Archdiocese received the allegation in 2004, and used a three-person church panel to investigate under a purely administrative process.

When Archbishop Alfred Hughes removed Sanders from the priesthood in 2005, Sanders’ former parishioners at Our Lady of Perpetual Help in Belle Chasse rallied around him. They blamed Archbishop Hughes for railroading him, accusing Hughes of trying to deflect attention from his own role in the Boston Archdiocese when it was accused of covering up sex abuse by priests.

The Gulfport police investigated but no charges were filed. No civil case was ever filed either. Sanders professed his innocence to reporter Bruce Nolan in a Times-Picayune article in 2005, and questioned the church's disciplinary process.

"I am devastated and heartbroken," Sanders said in an e-mail to the newspaper. "I feel an injustice has been done to me and my life's vocation has been taken away. I steadfastly maintain my innocence and will appeal this decision to the Vatican."

The church used an administrative review instead of a church tribunal for Sanders because, in 1993, 16-year-olds were still considered adults under church law. That had changed by the time the allegations were made, but the church used the rules in place at the time of the alleged offense.

Victims advocates thought that was wrong and sent Hughes a letter, urging him to stop the Belle Chasse community from backing Sanders publicly.

“In that parish, others were or are being sexually assaulted. When Catholics visibly and vigorously profess Fr. Sanders' innocence, they are unintentionally making it harder for current and past victims to come forward, report the crimes, protect others, and get the help they so desperately need and deserve,” Survivors Network of those Abused by Priests, or SNAP, wrote to Hughes in 2004.

Asked about the Sanders case, Tim Lennon, president of SNAP and a survivor of rape by a priest, said:

“Whether a child is 16 or 15 or 17 is immaterial to the possibly criminal and, if not, inappropriate behavior of an adult man. Of course, they should have been aggressive about that.”

But any effort to tamp down support for Sanders didn't work, and many in Belle Chasse thought Sanders had been cleared of the charges.