Just before nightfall, Entergy New Orleans had not restored power to several neighborhoods the company promised would be back online by the end of the day. 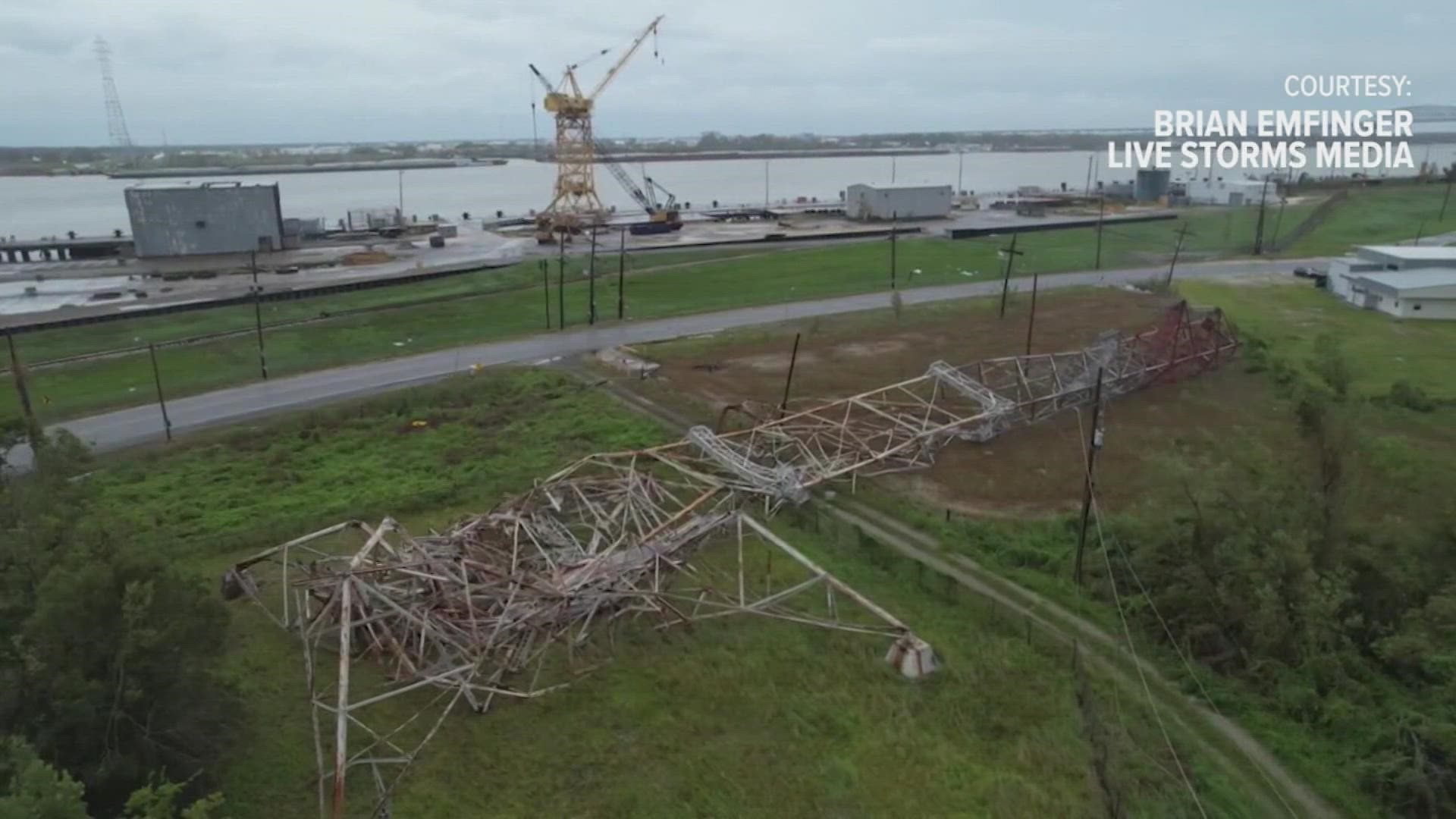 NEW ORLEANS — Finally able to take full stock of the damage caused by Hurricane Ida, Entergy Louisiana’s CEO called it one of the most devastating storms ever for the utility’s ravaged infrastructure.

“Incredibly, the number of poles damaged or destroyed is already more than we saw in Louisiana from Katrina, Zeta and Delta combined by a large margin,” May said Saturday.

The damage totals are staggering: more than 22,000 power poles, nearly 26,000 spans of wire and more than 5,000 transformers knocked over, broken or destroyed.

Places that took a direct hit from Hurricane Ida saw the biggest power system damage, and Entergy’s restoration estimates for those areas called for weeks more without power. In St. John the Baptist, St. James and Tangipahoa parishes, residents won’t have power fully restored until Sept. 17, Entergy said. And in coastal Jefferson, lower Plaquemines and throughout Terrebonne, Lafourche and St. Charles parishes, customers are likely must wait over three weeks, until Sept. 29.

Some get power sooner than promised, some later

Just before nightfall Saturday, Entergy New Orleans had not been able to restore power to several neighborhoods the company promised would be back online by the end of the day.

RELATED: HURRICANE IDA | When will my power be back on?

And although several New Orleans neighborhoods were restored earlier than expected on Wednesday, Thursday and Friday, frustration in the city was high after Entergy provided shifting explanations for why it did not use a new gas-fired power plant in New Orleans East to generate electricity without waiting for power from the regional grid. NOPS can generate 128 megawatts, about 10 percent of the total needed to power the whole city.

City Councilwoman Helena Moreno sent a letter to Entergy New Orleans CEO Deanna Rodriguez on Saturday afternoon, asking for reports on how the city can help the utility get federal and state aid to help cover its restoration costs, but making it clear that the City Council, which regulates the monopoly power company, would not support passing on those costs to customers.

Moreno said a storm reserve fund set up after Hurricane Katrina has a balance of $39 million and is intended to help defray costs from a disaster.

On Saturday afternoon, Entergy Louisiana also released estimated restoration times for specific areas of Jefferson Parish. The maps indicated crews would likely restore power on Sunday to areas expanding out from hospitals and other critical infrastructure that were already restored by Saturday morning.

But Entergy’s outage map was a source of more frustration. It showed some areas getting power back, even though residents there reported they still had no electricity. May and Rodriguez both acknowledged the map was not reliable and directed customers to a separate web page to track estimated restoration times or to text STAT to 36778 for a status update for their specific address.

Some customers also came home to find power back on their street, but not in their house. Hawkins said customers will have to hire an electrician if the equipment on their house, including the electric meter and weatherhead, the metal tube that carries electric conduit up to the roof, are damaged.

If Entergy’s service line from the pole to the house is broken, that’s Entergy’s responsibility, but those kinds of single-point repairs could take a while, Hawkins said.

About 300,000 of more than 900,000 Entergy customers who lost power at the height of the storm did have their power back on Saturday, Entergy said. Most of those with their lights back were in the heavily populated areas of Baton Rouge, New Orleans, Jefferson Parish and St. Bernard Parish.

The key to that was repairing and restoring six of the eight high-voltage transmission lines that feed outside grid power to southeast Louisiana, all of which failed during the storm.

One of those pathways included a 400-foot-tall, rusty tower in Avondale that collapsed into a gnarled heap and caused a 3,800-foot high-voltage line to drape into the Mississippi River. Entergy had to hire a contractor to detonate charges to bring down those lines from the tower on the other side of the river, in Harahan, to clear the wires and allow river traffic to pass safely again.

That allowed Entergy to safely turn control over the grid supply back to MISO, the regional power grid, and to create a loop so the metro area could once again handle peak load power.

In New Orleans, all 27 substations that receive that high-voltage electricity and switch it for distribution to homes and businesses were back online by Saturday morning.

That meant Entergy’s 21,000 line workers and engineers could turn their full attention in the city to the distribution system of poles, wires and transformers to feed electricity to homes and businesses.

“We’re feeling really good about our progress and understanding that we will continue to make more progress and look forward to getting every last customer restored,” said John Hawkins, Entergy’s vice president for distribution.

Entergy spokeswoman Lee Sabatini told WWL-TV the Waterford 3 nuclear power plant in St. Charles Parish safely shut down prior to the storm, which is a federal requirement. There was some damage to support buildings there, but no damage to the nuclear facilities, she said.

She said Entergy was able to keep all critical systems running at Waterford using diesel generators, but the company has not established a time for restarting the nuclear plant there.