The investigation could still be finished and turned over soon to the DA for possible criminal charges, the sources say. 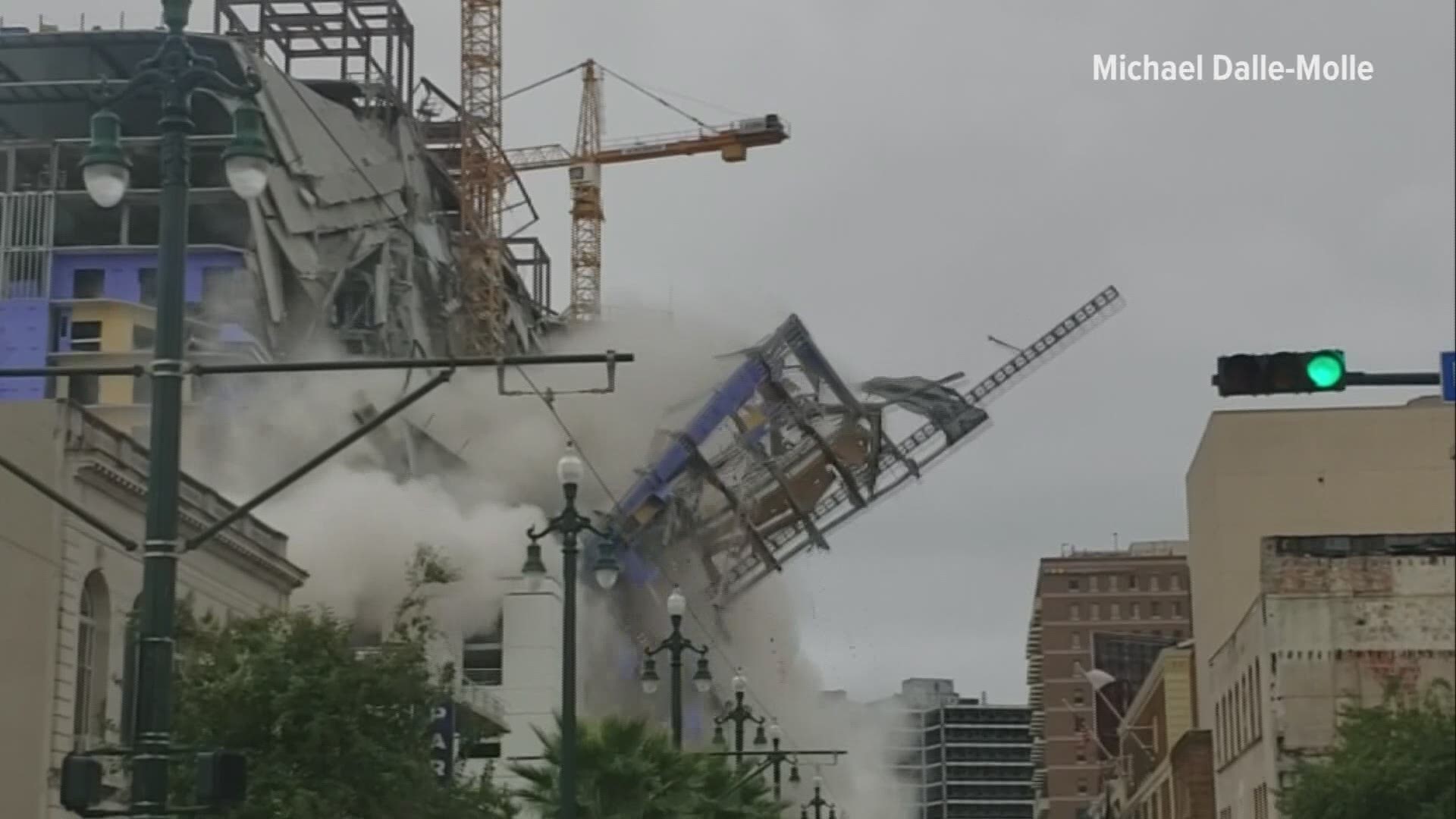 NEW ORLEANS — As the last rubble is cleared and the streets finally reopen where the partially built Hard Rock Hotel collapsed in October 2019, local officials and families of the three workers killed in the tragedy are calling for criminal charges before the case starts to fade from the city’s collective consciousness.

Palmer is right that an investigative report was written last year recommending criminal charges and still hasn’t been turned over to District Attorney Jason Williams.

But what she didn’t know until just last week is the inspector general’s lead investigator on the case, Kristen Morales, was suddenly suspended in December and fired in January.

Multiple sources with knowledge of the investigation tell WWL-TV that Morales’ firing has forced a significant delay in what could be the most important, most public investigation ever conducted by the New Orleans Inspector General’s Office.

Here's the explanatory text to go with the video of us getting kicked out of the Civil Service hearing: 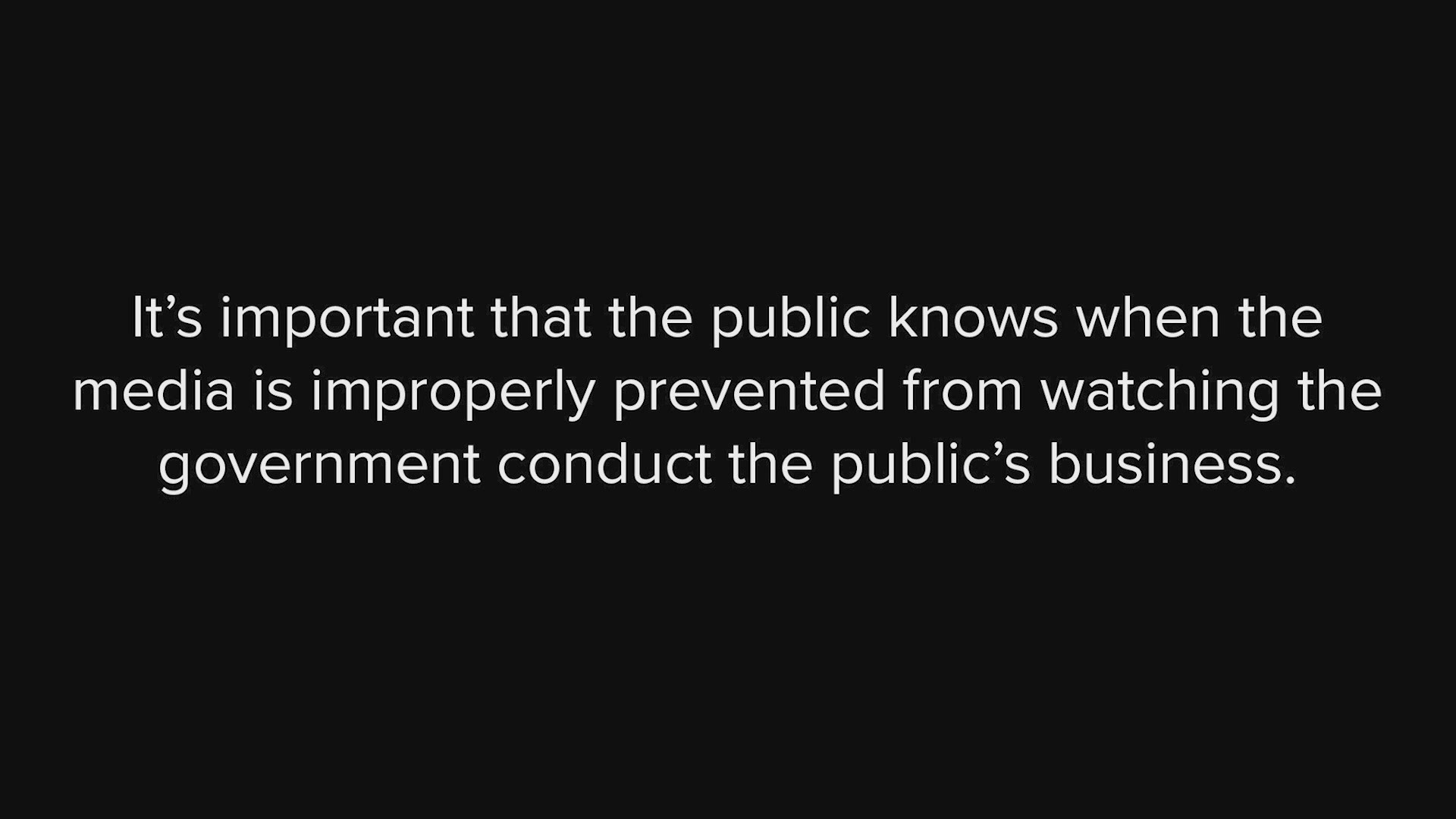 It’s important that the public knows when the media is improperly prevented from watching the government conduct the public’s business.
Kristen Morales, the inspector general’s lead investigator on the Hard Rock Hotel collapse and city permitting corruption cases, appealed her termination and had an adjudication hearing on April 9 in the city’s Civil Service Commission office. The Office of Inspector General is independent of City Hall, but IG employees are covered by the city’s civil service rules.
WWL-TV was there to cover the public hearing April 9. As the video shows, when photographer Derek Waldrip tried to enter, the hearing officer, Jay Ginsburg, incorrectly claimed the hearing was closed and cursed at him. When reporter David Hammer tried to gain entry, Ginsburg cited Covid restrictions and again slammed the door when he saw the video camera.
The station’s lawyers had to intervene. It took more than an hour before Hammer was granted access to cover the public hearing, as long as no video or audio recording of the proceedings was made.

There are two parallel tracks for the criminal investigation, according to these sources. One track is being led by agents from the federal Occupational Health and Safety Administration, investigating allegations that negligence or corner-cutting may have caused the building to collapse.

OSHA issued safety violations and fines against several contractors working on the Hard Rock project but has declined to release a final investigative report to law enforcement while some of the citations are being challenged.

The sources who spoke to WWL-TV on condition of anonymity say Morales was assisting OSHA in its investigation while leading the other investigative track in the Hard Rock case, looking at the role of city building inspectors who allowed allegedly improper work to move forward.

Those sources say Morales finished her work investigating the Hard Rock inspectors last year, but the Inspector General’s Office has had to go back and replicate some of her investigative work in the months since Morales was fired.

Asked how Morales’ firing has affected the Hard Rock investigation, Walter Becker, general counsel for the Inspector General’s Office, said: "The OIG investigation is not shut down. It is ongoing. The OIG has very experienced and very competent investigators working on this matter."

The investigation could still be finished and turned over soon to the DA for possible criminal charges, the sources say.

A joint investigation by WWL-TV and The Times-Picayune | New Orleans Advocate in February 2020 found at least three city inspectors filed false inspection reports for the Hard Rock in the weeks and months before the collapse, claiming they had gone to the construction site and taken photographs of the work even though GPS in their city vehicles indicated they didn’t stop at the Hard Rock on those days.

The photographs were allegedly taken by the Hard Rock construction team and three inspectors passed them off as their own. The city suspended and moved to fire all three of those inspectors after the news stories.

Morales is appealing her firing through the Civil Service Commission. The Inspector General is independent of City Hall but its employees are governed by civil service rules. WWL-TV attended Morales’ civil service hearing in April, which was stopped after a few hours because the stenographer became ill. William Bonney, deputy inspector general for investigations, testified that Morales violated several city policies:
- She gave away an old office cell phone in 2015, which she says she got approval to do because it was surplus.
- She accepted a trip to the Heisman Trophy ceremony in New York on a private jet, which she says belonged to a family friend who had no business in the city of New Orleans.
- She allegedly stood too close to Bonney in the copy room last year, in violation of Covid social distancing rules. She disputes Bonney’s description of what happened.
- She worked from her boyfriend's apartment in Kenner last year, allegedly violating city residency requirements. But she says that's just where they quarantined when they both had Covid. She offered utility bills, photos and a statement from her landlady to prove she still resided in New Orleans.
- She allegedly retaliated against fellow IG employees and was insubordinate, including by filing a discrimination complaint with the Equal Employment Opportunity Commission. Morales says the law protects her right to seek relief through the EEOC.

Palmer questioned why the inspector general would dismiss Morales for administrative reasons, especially as she was on the verge of wrapping up the Hard Rock investigation.

“If she was dismissed because of investigatory issues, then I could understand having to go back and investigate the work, the body of work,” Palmer said. (But) if (the reason she was fired) has nothing to do with her body work, then can't some of this information be released?”

Asked if she rubs her colleagues the wrong way because she is “aggressive,” she offered a different description: “assertive.” What isn’t in dispute is that she’s been productive for an IG’s office that’s faced criticism for its lack of action in recent years.

The agency’s 2019 annual report praised Morales for obtaining high-level certifications as a fraud examiner. The report listed 14 city employees suspended as a result of investigations. Eleven of them were suspended based on Morales’ investigation of the Safety and Permits Department.

The same report listed six criminal cases handled by its Investigations Division in 2019, with Morales working on four of them and three leading to criminal charges that year.

Most significantly, her years-long investigation of corruption inside the city’s Department of Safety and Permits netted a federal bribery conviction in 2019 and another federal indictment against two inspectors this year.

Former Safety and Permits Director Jared Munster said Morales was the driving force rooting out a web of corruption by inspectors and building contractors over the last decade.

“Our relationship over the years with Kristen Morales was truly an integral part of finding the problems in the Department and working to clean them up,” said Munster, who left City Hall in 2018 and now lives in Florida. “I don't know what the new inspector general's intention was in getting rid of Ms. Morales, but certainly the effect is absolutely chilling on any sort of accountability in government.”