Qualified immunity: Police off the hook for no-knock raid on wrong house

A federal judge says the officers who raided the wrong house and arrested an innocent elderly man have immunity. Now, it's up to the court of appeals to decide. 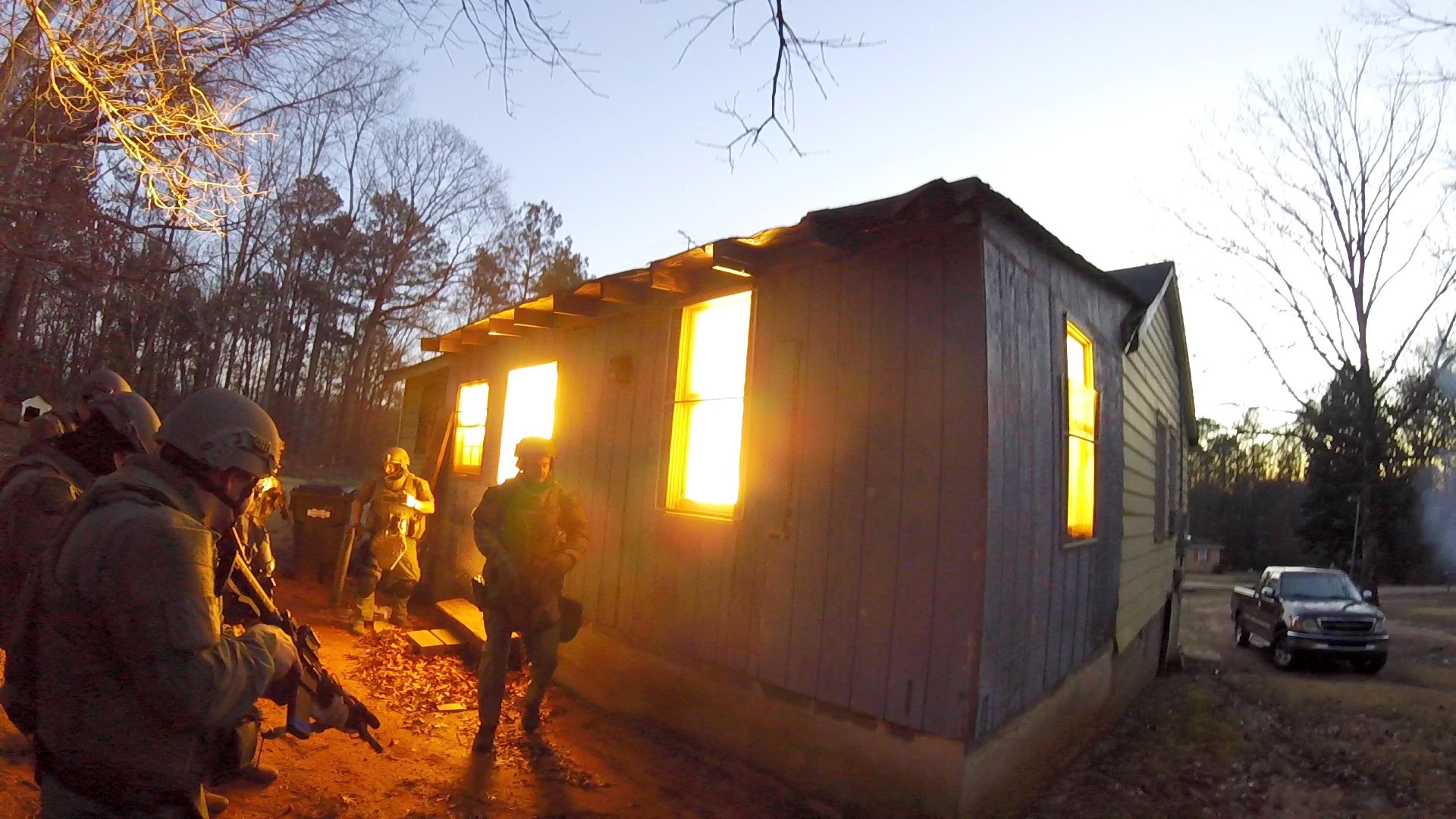 HENRY COUNTY, Ga. — Onree Norris was watching the news when the explosion went off inside his home.

“Something went off like a bomb in my house,” the now-81-year-old remembered from the February 8, 2018 raid on the home he has owned for half a century.

It was the Henry County Sheriff’s Office Special Response Team smashing down his door with a battering ram. The explosion Norris heard was a flash-bang grenade that dynamic-entry teams use to disorient their targets.

But Norris wasn’t the target of the raid. Deputies had the wrong man, and the wrong house.

The no-knock search warrant signed by a Henry County magistrate was for the house next door. The warrant obtained by The Reveal investigative team shows a detailed description of the target address, including information about the suspected drug dealer living next to Norris’s house.

RELATED: Atlanta City Council pushing for ban on use of no-knock warrants

The warrant described an off-white house with a black roof. Norris’ house is yellow with a gray roof. The houses even had separate driveways, addresses, and mailboxes.

Yet the heavily-armed, camouflage-clad Henry County SRT deputies walked right past the target house without clearing it, and charged through a tree line straight to Norris’ back door.

Three strikes with the battering ram, and the door gave way.

"Sheriff’s office, search warrant!,” a deputy yelled before tossing in a flash-bang grenade.

Norris said the deputies kicked down four doors before they found him standing in his hallway, illuminated by the tactical flashlights attached the SWAT team’s M4 rifles.

“Got to the hallway, they was all over me,” Norris said. “Grabbed my arm, twisted behind my back, and handcuffed me.”

The Reveal obtained eight complete helmet-camera videos that were provided to Norris as part of his lawsuit against the deputies. Once they realized they had the wrong man, the deputies turned off their cameras, one by one, but some remained in Norris’ house after the mistake was discovered.

Norris said the deputies told him they would leave and he would be released only if he agreed to sign a piece of paper they put in front of the handcuffed 79-year-old.

“So I signed my name on there,” Norris said. “I didn’t get a chance to read it.”

Attorney Darryl Scott filed a lawsuit on behalf of Norris against the deputies who had laid siege to his home without a warrant.

“A pizza delivery man could have delivered a pizza to the correct address,” Scott said describing the lack of due diligence the deputies showed.

The primary defendant named in the lawsuit was the tactical commander, but a federal judge dismissed the case against him and the other deputies, ruling all law enforcement officers are protected by Qualified Immunity.

“Qualified Immunity is a court-invented doctrine that allows law enforcement officers and other government actors to avoid liability when they violate citizen’s constitutional rights,” Scott explained.

The doctrine was carved out to protect officers from individual liability when they make mistakes attempting to enforce the law.

“As a screening mechanism for frivolous lawsuits, and what it’s morphed into is almost absolute immunity for law enforcement officers,” Scott said.

The U.S. Supreme Court has determined that officers can be held liable only when they violate rights that are “clearly established.” Scott said, “in practice what that means is a civil rights plaintiff has to find a case with functionally-equivalent set of facts that’s already been decided.”

Norris and Scott have filed an appeal with the 11th Circuit U.S. Court of Appeals.

Attorney Darryl Scott has a good track record fighting Qualified Immunity dismissals. After 11Alive exposed the wrongful arrest of a Griffin couple by Clayton County Police, and a federal judge tossed their lawsuit against the detective who arrested them on Qualified Immunity, the 11th Circuit reversed that decision.

The appeals court ruled the police could not hide behind Qualified Immunity in the Clayton County case, which led to a settlement brokered by Scott.

In Georgia, cities and counties enjoy Sovereign Immunity that creates an even higher hurdle for plaintiffs than Qualified Immunity. That’s why citizens seeking compensation for damages from the actions of government often sue individual officers, though in the vast majority of cases, cities and counties indemnify their employees for official acts.

In other words, any payments would come from the government agency or its insurance company, not the officers’ own money.

The SWAT Team Got Lost

“Missed it,” the deputy in the lead car exclaimed less than a block from the target house.

The SRT deputies in the trailing vans could be heard on camera straining to hold themselves up as the convoy came to a screeching halt. Different tactical officers asked why they couldn’t just go around the stopped vehicles.

They waited for the lead car to make a U-turn, then followed it to the address on the warrant.

The tactical officer behind the wheel of the lead vehicle was following verbal directions from the automated voice on a phone’s GPS app, according to the video.

The deputies jumped out just short of the target house, waiting momentarily for the first two flash-bang grenades to begin their assault.

The confusion was evident from the first few seconds, as tactical officers openly questioned which house they should be raiding.

“Where’s the house?,” a deputy is heard on camera asking, with no response. “Where we at? Where we at?,” he asks again, without any answer.

Another deputy asks, “where’s the f***ing house?,” as the unit continues past the actual target on their way to Onree Norris’ house through the tree line next door.

One deputy on the scene, watching the column of SRT officers move quickly toward the Norris house, asked his buddy, “this house?,” referring to the actual target. The second deputy is seen swinging his head and back and forth between the two houses several times.

It was already too late.

When the deputy swings his head back toward the Norris house for the last time, his helmet-mounted camera captured the flash and the bang from the grenade the entry team had tossed inside.

“That just like scared me to death. I’d already had heart trouble, I had heart surgery,” Norris said.

Norris can be heard on the SRT deputies’ cameras telling them of his heart issues, but the entry team seemed unconcerned as they handcuffed the 79-year-old man.

“Alright, you having heart problems right now?,” a deputy is heard asking.

Deputies did not call for an ambulance.

The entry team released Norris and returned to the target house where they ultimately confiscated a handful of illegal drugs. The target suspect was not there. A man pulling parts from the abandoned cars on the lot was briefly detained when the SRT team arrived, but he was released without charges.

Norris’ grandson, Wantez Robinson, called 911 and requested an ambulance to check out his grandfather.

Deputies with the sheriff’s office came back and repaired the back door of the home a few days later, but lawyers for the tactical commander continue to fight any other compensation for Norris more than two years later.

We reached out to those attorneys in the pending appeal, and they declined comment. The Henry County Sheriff also did not offer a response.

Norris’ granddaughter, LaCristy Johnson, summed it up this way: “the government has given officers a blank check to go out in the community and break the law. They feel like they have the right to do that with no consequence,” she said.

Norris fears he won’t be the last victim of a a no-knock warrant served on the wrong house, because of Qualified Immunity.

“They’re just gonna keep on doing it,” he said. “They probably go into somebody’s wrong house, somebody’s gonna get hurt.”

The Reveal is an investigative show exposing inequality, injustice, and ineptitude created by people in power throughout Georgia and across the country.

MORE FROM THE REVEAL:

'I can't breathe': Man dies in custody after hours of begging for help