Here's how online predators can contact your child through popular apps 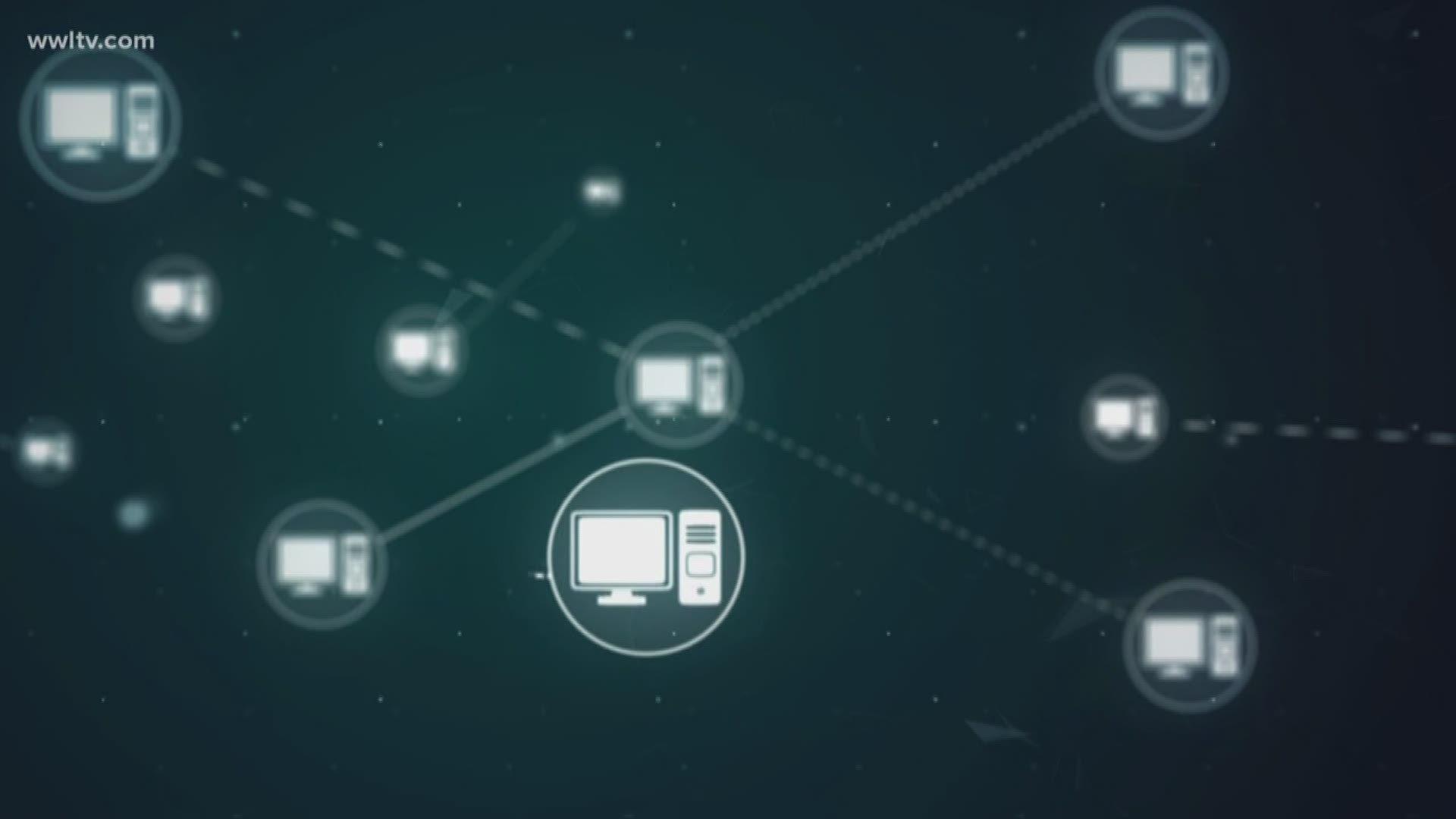 NEW ORLEANS — Law enforcers say many apps that appeal to children can have a dangerous side, allowing would-be predators access to them.

The apps that online predators use to reach underage children have a few things in common, according to investigators:

- The ability to track location

- The ability to exchange photos and video

- The ability to stream live video

- Ability to send and receive messages

It’s a lesson youth group leader Janine Pierce said she learned the hard way, when a member of her group ended up in the hands of alleged human traffickers last May.

“I had no idea until recently the perils behind the controller. They're holding the whole world in their hands pretty much, access to them, easy access,” Pierce said.

The boy in this case regularly played video games online, but he first started chatting online with the alleged predators through a messaging app that gamers use to talk called Discord.

“These predators know exactly what they're doing,” Pierce said. “They're grooming these kids.”

The boy was convinced he would have a better, more fulfilling life with the suspects in St. Petersburg, Florida. And in the early morning hours one day last May, he got into a red, Toyota Prius with them and traveled to Florida.

He thought he was headed for a better life, but in reality, ended up in a squalid trailer.

“The victim was living on a small mattress with no bedding surrounded by animals, animal cages and animal feces,” said St Petersburg Police Sgt. Mark Hensley. 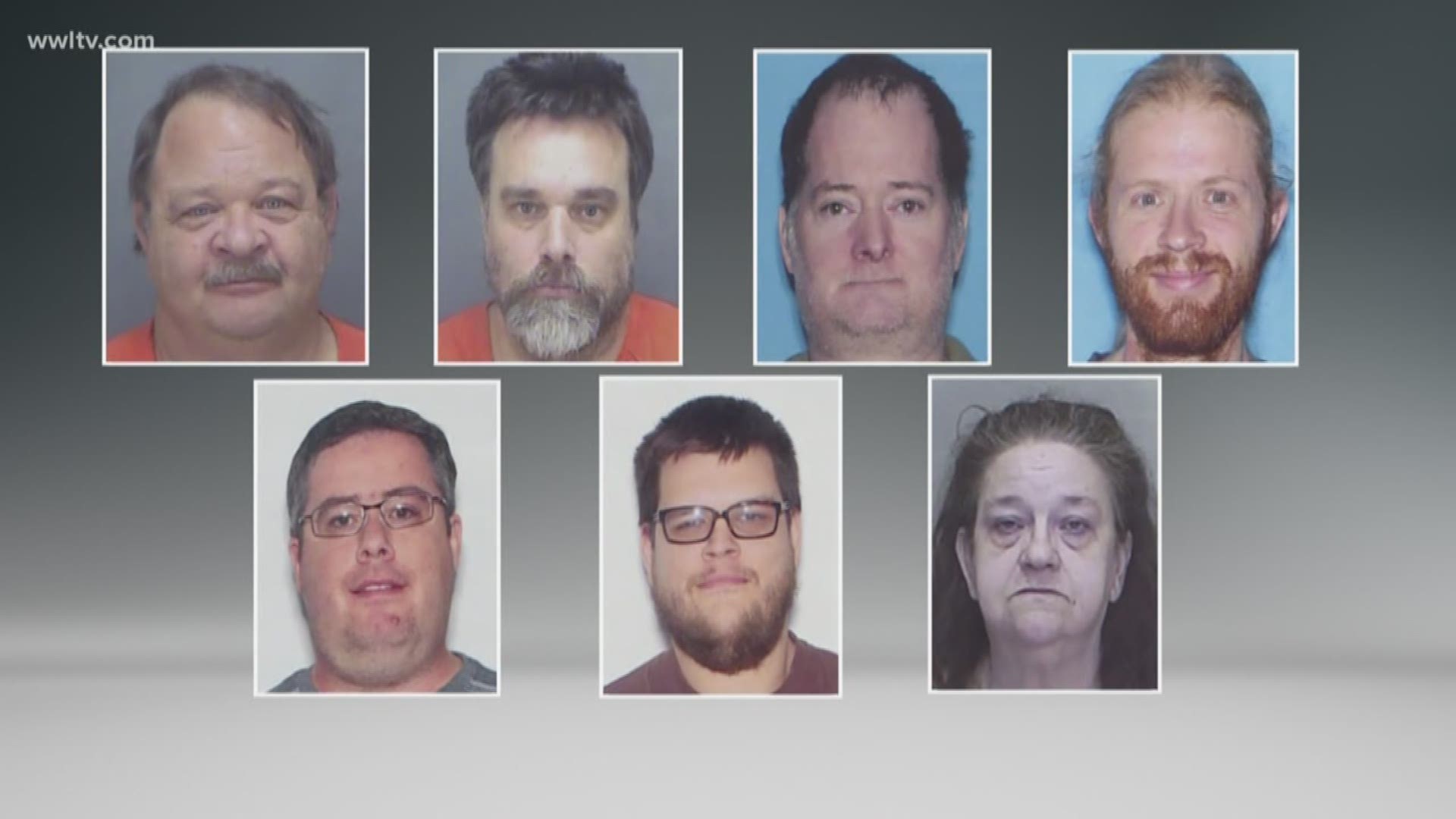 Pierce helped police find the 17-year-old using the messages he had exchanged with the alleged traffickers on Discord, and when police found him, they rescued another 15-year-old boy who investigators said had been held as a sex slave for over a year.

“We had no note. We had nothing. We had a happy kid the day before at youth group. And the day after he's just vanished,” Pierce said.

The way the boy’s terrifying story nearly turned tragic should serve as a wake-up call for parents everywhere.

“It could be anybody. You could be from a great family, a loving family,” said Corey Bourgeois, manger of the Forensic Computer Lab for the Louisiana Bureau of Investigation, a division of the La. Attorney General’s Office.

That’s something online predator hunter “Holly,” who asked us not to use her last name, said she knows too well.

“It's emotional. It's very emotional. Making me cry. I can't imagine my children or anyone else's children reading some of the things that we've read,” Holly said.

She created the Facebook group and page Southern Mothers Against Predators. A group of volunteers, many of them mothers, who pose as young teenage girls online in a variety of apps.

Once conversations with over-age men turn sexual and the potential predators ask to meet for sex, Holly confronts them on Facebook live. 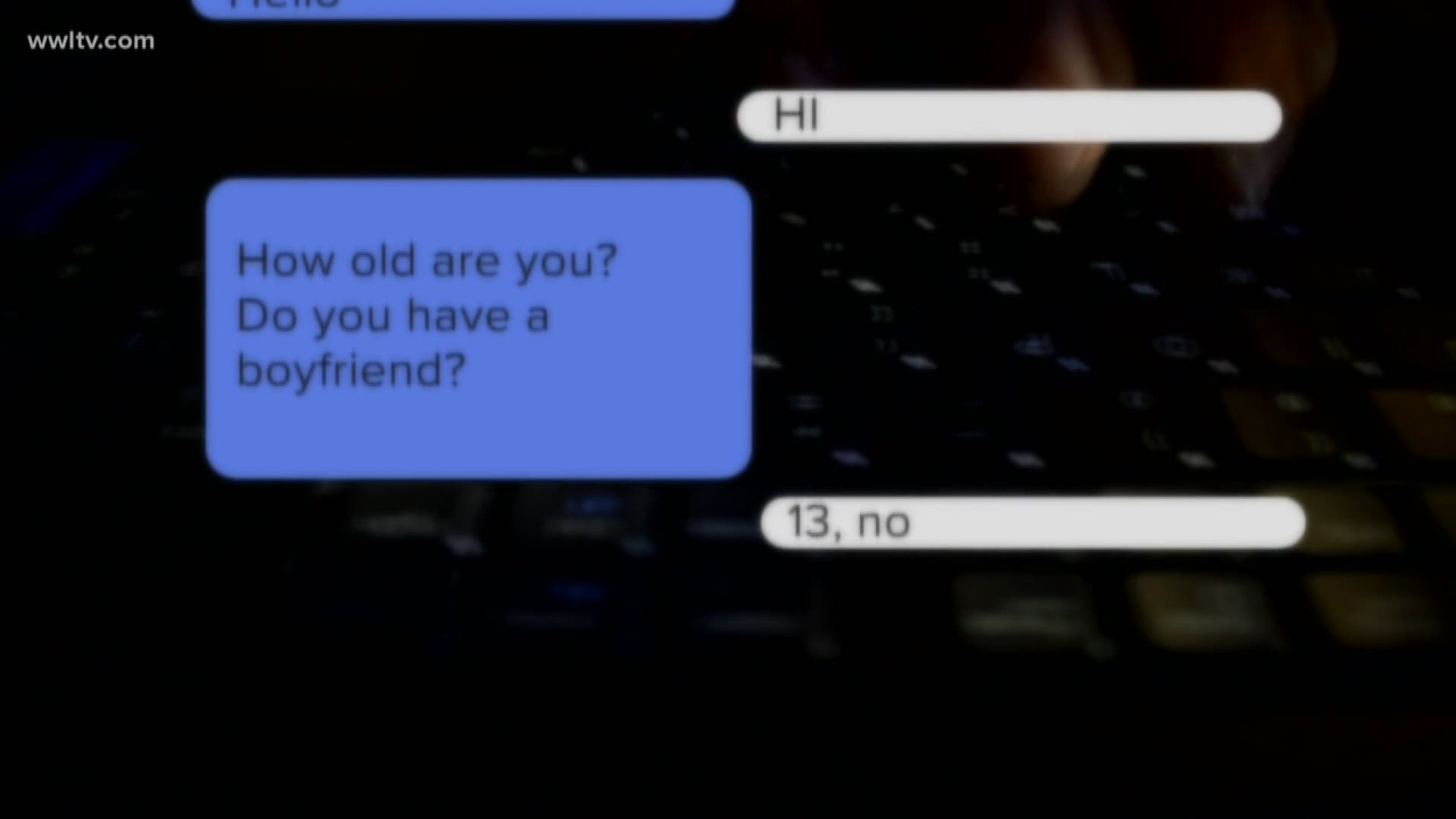 While Holly is not a trained law enforcement professional, she said she knows how easy it is to find would-be predators online.

But there are many apps commonly used by children on their devices that, if mismanaged, could prove problematic, according to law enforcement.

Kathleen Fronczak is a detective for the Kenner Police Department who specializes in child exploitation cases. She warns against any apps that allow children to share photos and videos with strangers.

Access to the apps and the proliferation of electronic devices is leading to an explosion in child exploitation cases. Fronczak could not provide hard numbers, but estimated Kenner Police have seen a 65 percent increase in cases over the past two years.

“Any application, whether it's a game, whether it's on social media where there's a direct messaging ability, we need to be really careful of those,” she said.

That warning includes mainstream social media that many people use, including Facebook, Instagram and Snapchat, which allows messages to disappear after 24 hours.

Popular apps that could allow predators access to children

Facebook and Instagram say they work regularly with law enforcement to try and root out dangerous and illegal behavior on their platforms, with strict policies spelled out online.

Law enforcement experts say those apps can be where conversations with predators begin with the predators sometimes encouraging children to change over to encrypted messaging apps to "groom" them.

“They don't talk by cell. Cells can be traced, I guess. They talk by these encrypted apps,” Pierce said.

“Grooming” is the process predators use to convince children to trust them, and to encourage children to willingly come with them.

“They're gonna groom them until they say, yea, that's what I want. I want all of these things and the next thing you know, they're in some backwoods trailer saying I didn't sign up for these things,” Bourgeois said.

It happens on apps that are mainstream and those that are less well-known.

Kik is a group messaging app that law enforcement agencies all over the world have warned parents about.

The app’s terms of use say people must be over age 13 to use it, but once you join, some of the public conversations, even in their titles, appear to be sexual in nature. 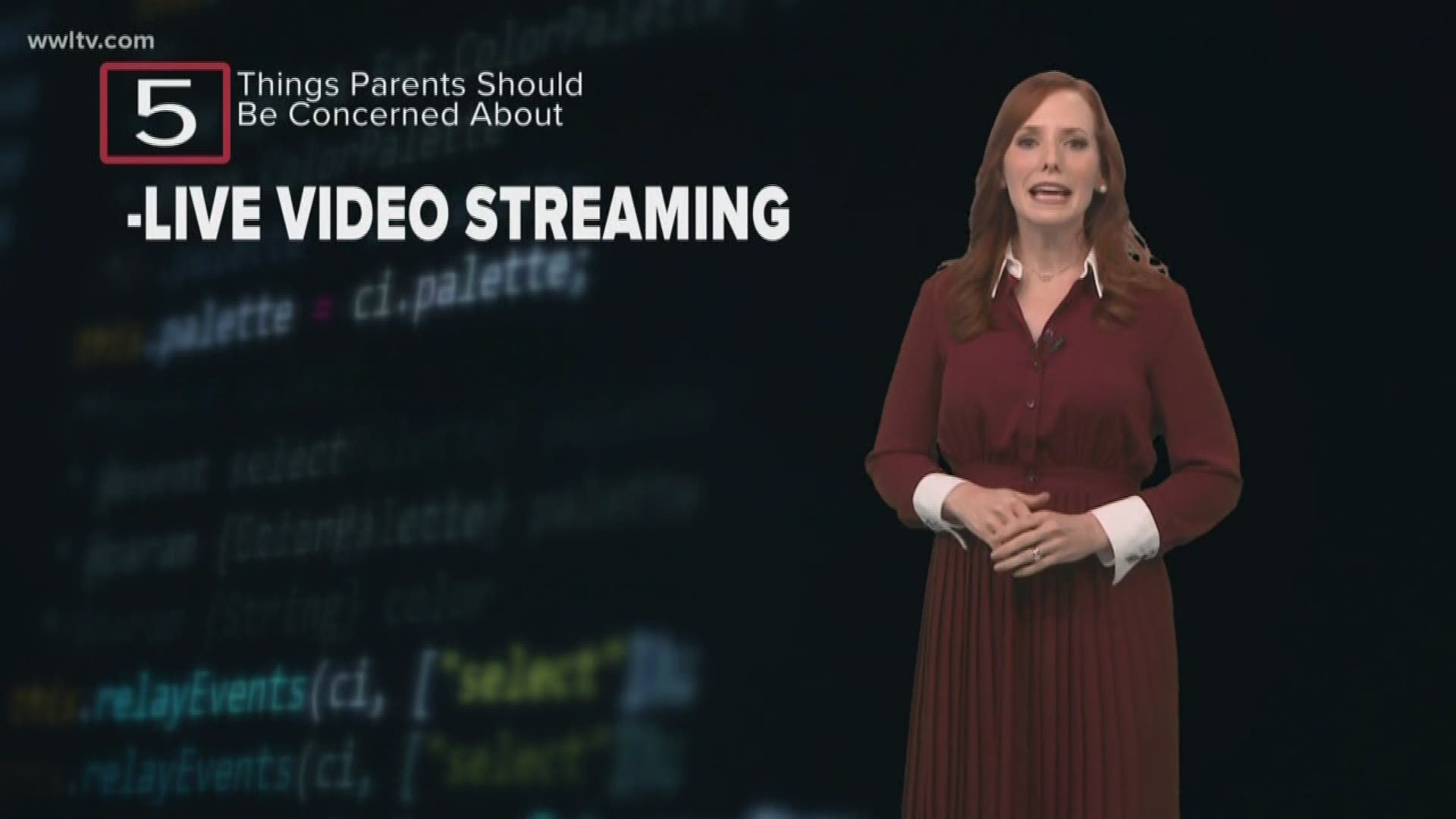 “We would never be comfortable with a stranger that we didn't know taking a child into a room that we couldn't see in. We would never be ok with that and that's sort of the same thing online,” Fronczak said.

The app store also contains a number of apps that allow you to hide content on a device. For example, Secret Calculator Photo Album looks like a calculator on a phone’s home screen and it is a functioning calculator until the person enters a secret pass code.

Once that code is punched in, hidden photo albums are revealed, and it also provides a way to secretly browse hidden apps within it.

While those apps don't provide access to predators, they allow children to hide things from their parents.

Police said some other apps can be dangerous because they tell the world where your children are.

The law enforcement experts we spoke with cited apps such as Mappen and GroupMe as potential problems, because they use the phone or device to geolocate, or show the user's location.

Mappen's CEO, Jared Allgood said he thinks law enforcement concerns about the app are exaggerated, because locations are only visible within a user's network. He went on to say Mappen takes added steps to confirm users' real identities and the network of mapped friends can only be one-person-removed from the account holder.

"On sign up you must verify your phone number and we algorithmically verify your name and show it to people you request. Users can remove “friends” and go “offline” with a single tap. Mappen encourages users to only add people they know and trust in real life. Like all social media, parents should be involved in how their teens use Mappen," Allgood said.

Whisper is another app that reveals a poster’s location. It is an anonymous messaging app that allows the user to “tell secrets” to the online world.

When working with Holly and SMAP, a decoy posted a young-looking picture on Whisper one evening last month. Dozens of strangers reached out to the decoy within minutes.

Law enforcement said the apps that allow the exchange of photos and live videos in particular can be some of the most dangerous for children when mis-used.

For example, the app House Party allows video chats with up to 8 people who the user invites in for a conversation. But if the privacy settings aren’t properly set, strangers could join in the conversation as well.

A spokesman for the app said the company takes safety very seriously.

"HouseParty is designed to be used among people who know one another in real life, and there are multiple safeguards in place to ensure that video chats can only be initiated by users who have mutually accepted one another's friendship. We're committed to creating a respectful community and we always encourage users to share their feedback and report any concerns. The measures we take to ensure the trust and safety of our users are outlined in our guidelines," House Party said in an emailed statement.

There are no age limits on who can use the app, however.

“We want to be very careful about applications that allow live streaming or video phone calls, things like that. Because children take their devices with them everywhere they go, there's no limit or boundaries where they will take their phone or their tablet out and start live streaming or taking photos,” Fronczak said.

Another app mentioned by law enforcement as potentially problematic is Smule. It is a karaoke app that allows you to plug in headphones and a mic and record videos of yourself singing. You can share those videos publicly, posting them as “duets” with others.

Smule does not have private profiles, so anyone could contact your child through messaging. We quickly found content on the app that some would consider inappropriate for children in the form of a nearly-naked woman singing in a video in the “Disney” song group.

The app can be lots of fun, with celebrity singers known to join duets with average singers, but like all apps, law enforcement cautions, if not properly monitored, it could be problematic for children.

Smule, GroupMe, Snapchat and Kik did not respond to requests for comment in time for publication.

The Louisiana Attorney General's office created a resource for parents called "Be Smart with your Smart Phone," available here.