This is Part 2 of Standard of Care, a Katie Moore Investigation into how COVID-19 spread through Louisiana nursing homes and what could have been done to stop it. 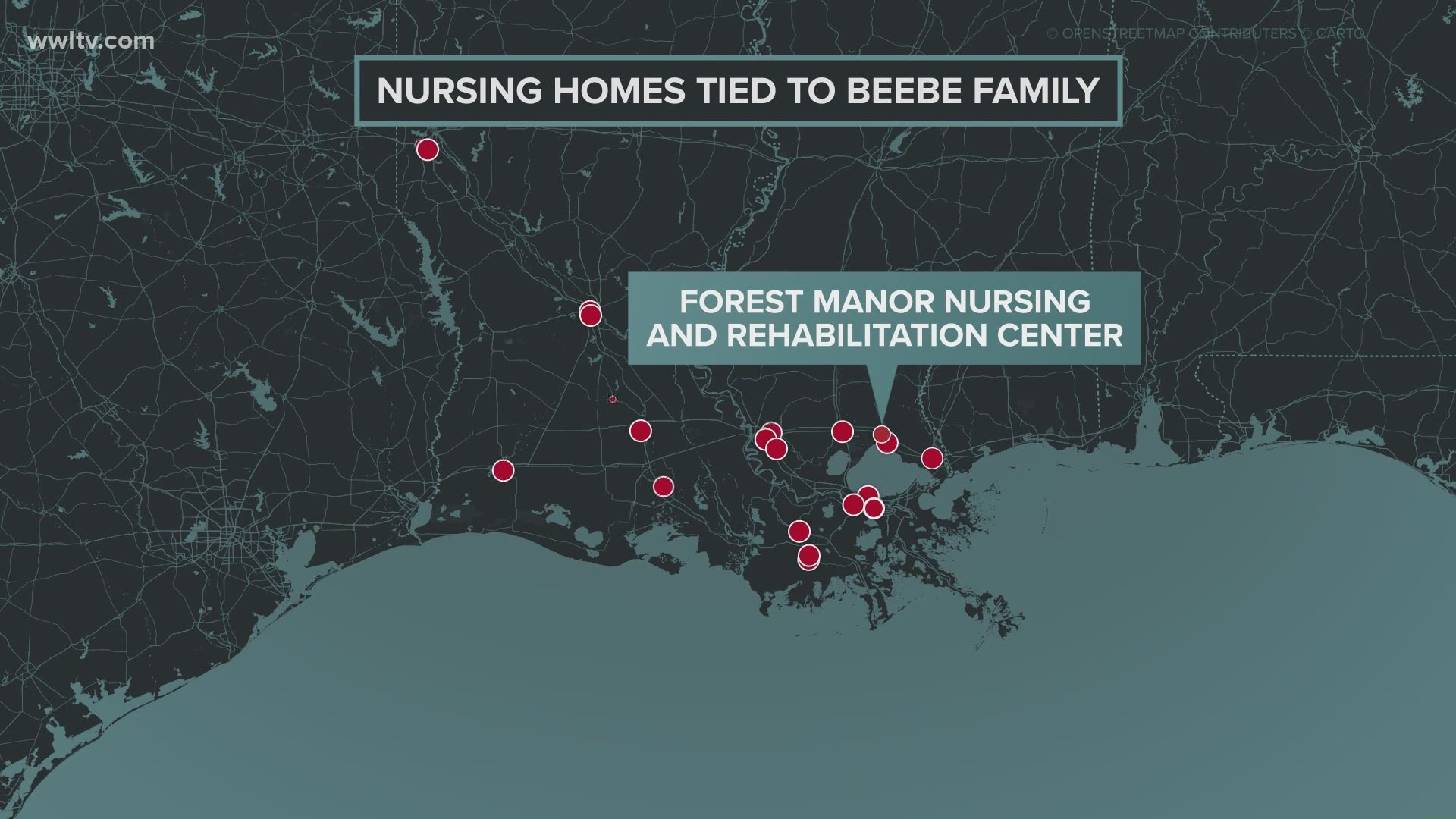 COVINGTON, La. — As COVID-19 started roaring through Louisiana’s nursing homes, a government ban on in-person visits left family members desperate for answers about the condition of their loved ones.

Some, like Lisa Bloemer, said overwhelmed nurses and staff made it difficult to get information.

“Like, I know. I'm sorry we’re bothering y'all, but that's our mom and she's dying and she's got COVID,” Bloemer said days before her mother, Carolyn Fowler, died of COVID-19 at Forest Manor Nursing & Rehabilitation in Covington.

Bloemer was scared and sad and angry at both the disease dragging the life out of her mother, and about the care she suspects her mother wasn't getting.

“It's like we're not getting any help anymore,” Fowler said in a recorded FaceTime phone call with her two daughters as she approached the end of her life.

Bloemer said her mother was talking about help with her food, opening packages and straws, for example.

“I'm like, why doesn't anybody go in there and help them with this? We don't have time for that,” Bloemer said a Forest Manor staff member told her on the phone when she expressed concerns about it before her mother passed away.

A former nurse at Forest Manor questioned how seriously administrators and some of the staff took the virus in the earliest days of the pandemic.

“They forgot about the people. They forgot about who they care for,” the nurse continued. “It makes me very upset that, you know, these people trust us with their family members and we put so little care in to keeping them safe.”

PART ONE: 'He was a sitting duck' - 38 people died at a Covington nursing home - Why?

"So many families were ruined"

The nurse and several Forest Manor families said they thought administrators did not adequately isolate patients when they were showing symptoms and with a shortage of testing, it made the facility ripe for spread.

“I feel like so many lives and families were ruined because of it,” the nurse said.

Thirty-eight residents died, making it one of the deadliest outbreaks in the state.

“What you saw in the nursing homes that got hit hard, it's their staff who got sick and couldn't come to work and they couldn't care for the patients who were being isolated. You had to take care of patients who had COVID and those who didn't have COVID with limited staff and that's a nightmare for everyone involved,” said La. State Health Officer Jimmy Guidry while testifying before the La. Senate Health and Welfare Committee last month.

The nurse said that was true of Forest Manor as well. As of last week, state health records show 28 of their staff members had gotten COVID-19.

“We thought it was a nice facility. I mean, I think they're just so overwhelmed. They're not, you know, nobody was prepared for what's going on,” Bloemer said.

We spoke in the final hours before her mother passed away.

“Staffing levels, they've always been an issue in nursing homes. And so with this pandemic, it's become at crisis levels. And we've heard stories from families about this issue. And we've also heard from staff members who are in nursing homes that have said that they are woefully understaffed and were not prepared,” said AARP Louisiana State Director Denise Bottcher in an interview at the height of the pandemic.

To find out if there was a connection between quality of care ratings from CMS, the Center for Medicare Services, and COVID-19 infection rates, we spent months analyzing state COVID data and comparing that to federal Medicare quality rankings for Louisiana's nursing homes.

We found of the 50 nursing homes with the greatest number of COVID deaths, only 2 had average staffing ratings from Medicare. The rest were ranked below average or far below average even before COVID raged.

The ratings consider how much time nurses spend with each patient based on payroll information. The rating system also takes into account how sick the residents are, or how much care they need.

“I've primarily been researching in California and we're showing a strong relationship between staffing and infection rates. And that's, in fact, a total staffing. And RN staffing can reduce the current infection rates and death rates by half,” Harrington said.

Louisiana's state-wide staffing picture isn't much better. It's one reason the AARP ranks the state’s nursing homes among the worst in the country for quality of care.

CMS researchers ranked Lousiana’s nursing home COVID infection rate the worst in the country when you account for the resident population size. They found Louisiana’s average COVID cases per 1,000 residents is 552.5. The state with the next-highest average is Mississippi at 401.8.

They recently released a study drawing a strong connection between quality ratings and COVID infections and deaths.

But Louisiana state health officials and those who advocate for the nursing homes cite additional studies which have shown community spread of COVID-19 is a greater factor in nursing home outbreaks than quality of care.

"Outbreaks in nursing homes are correlated with the amount of spread in the surrounding community, and even the best nursing homes with the most rigorous standards cannot always stop this highly contagious and invisible virus," the American Healthcare Association, a nursing home lobbying organization, said in a statement.

They also point to a lack of access to testing early on and a shortage of personal protective equipment which made nursing homes fertile ground.

“Majority of time we were so short, [nurses] were able to run in, give them their meds and run right back out,” the Forest Manor nurse said. “They were flustered a lot of time. You know, people would get aggravated because they were not getting breaks.”

The nurse and several resident family members we spoke with said they think short staffing played a role in the spread.

At one point, the nurse said nurses and aides were working both the COVID isolation hall and the hall where administrators placed patients they thought might have COVID.

As the obituaries mounted in late spring, fewer residents meant nurses and aides could spend more time with each resident, but the nurse we spoke with said administrators started cutting back their work hours.

“It has always been about money to that company,” she said.

We tried repeatedly to speak with the nursing home, but they did not respond to our calls and emails seeking comment.

The Beebe family, a family of long-time nursing home owners, own Forest Manor and they have ties to 26 nursing homes across the state. They own even more homes in Mississippi.

More than half of their nursing homes ranked average or above average for overall care but their staffing numbers tell a different story.

All of their homes ranked below average or well below average for staffing and half of their nursing homes have reported COVID deaths in the double digits. At least 269 residents have died of COVID in their care in Louisiana.

When reached by phone, Elton Beebe declined to comment, directing WWL-TV to call Pathway Management. They and other family members contacted did not return repeated requests for comment.

Whether it was the care she received or just the virus' vengeance, it's impossible to say. But Carolyn Fowler's daughters said their experience at Forest Manor left them with lingering questions.

Over the past several months as I have worked on this series, I tried repeatedly to speak with Forest Manor, the Beebe family and many staff members that I found who currently work at the facility to get their perspective on what happened.

None of them would do an interview with me about it.

Today, I heard from a resident at Forest Manor who said he thinks the facility is clean and says he feels administrators and staff take great care of him.

On our Facebook page, many of the workers at Forest Manor commented saying they did everything they could with the resources they were given. Others say they went above and beyond, working extreme over time to keep their residents safe.

RELATED: 'He was a sitting duck' - 38 people died at a Covington nursing home - Why?